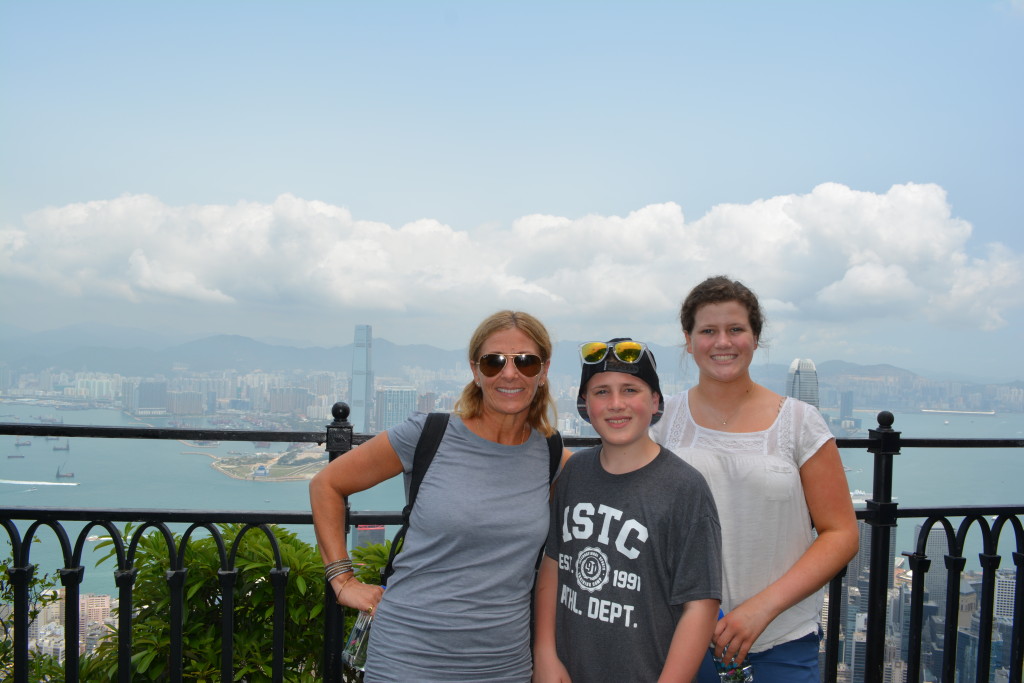 The kids and me at the top of Victoria Peak overlooking the harbor.

In the ten days or so since I returned from my spring break trip to Hong Kong, I have experienced the following: searing jet lag; a day-long road trip to visit my father who lives a two-hour drive south; lunch and a visit with my mom who lives much closer; the theft of my purse and wallet while walking at a local park with a friend and subsequent scramble to prevent said thief from making any further purchases beyond the $1,500 spent at Target and Lowe’s or from buying, say, a new car in my name; a visit with college friends in Brooklyn that gave me the impression I’d stumbled into an episode of “Girls” cast 25 years in the future in which I played the schlubby pal from New Jersey; and yet another college tour as the big decision day approaches for my 17yo requiring a total of about eight hours of driving, the consumption of two bacon cheeseburgers in 24 hours and lots of smiling.

I’m tired, and I don’t even have a banana in my house at the moment, much less ingredients to produce something for dinner later this evening.

I’ve also had a Jiminy Cricket of a hard time trying to wrap my arms around my Hong Kong experience to tell you about it. It hasn’t been easy summing it all up in 1,000 words. I think it may need to be done in a couple of posts, so I’ll begin with some overall impressions of the trip along with my thoughts on combining drugs and alcohol for air travel (spoiler alert: I’m a fan).

It seems trite, referring to a vacation as a “trip of a lifetime.” Like, until recently, I couldn’t have really told you what that meant. I mean, aren’t vacations — by their very definition — all memorable?

But now I know, some destinations stand head-and-shoulders above the rest. Like Hong Kong.

As we prepared to board our plane departing out of JFK and had our boarding passes scanned one final time, I actually started getting a little hysterical as the kids and I started down the ramp, toting our backpacks, neck pillows and assorted reading and viewing material.

“We’re going to China,” I cackled and proceeded to laugh uncontrollably as we neared the plane door until my 17yo told me to calm down. “You’re gonna get us arrested or something,” she hissed. Ever the alarmist.

But in the days leading up to our departure, I had begun feeling a little unhinged about flying half way around the world with my two youngest children. It had just seemed so – I don’t know – BIG. I mean, who goes to China for spring break?

Not a lot of people in my neck of the woods.

I know this because the nearby Billabong store was keeping track of where all of its customers were traveling over their various school breaks. The store had propped a piece of poster board behind the register divided into boxes bearing the names of the different destinations, and they used tally marks to keep track of how many customers were headed in each direction. We’d stopped in the store a few times before our own trip – to pick up a bathing suit and some shorts for the 12yo – and had mentioned on the first visit that we were flying to Hong Kong, which the Billabong folks happily included on their getaway chart. It seemed the majority of spring breakers were headed to Florida, Costa Rica and Puerto Rico but there were some other pretty exotic destinations listed on that poster board – like Ireland, Ecuador and Fiji.

As of the day before we departed, there remained only one check mark under Hong Kong.

But we made our way towards the back of the plane and settled in and one Valium and two (or maybe three) free plastic cups of red wine later (pour moi), we were landing in Hong Kong (my strategy for mixing drugs and alcohol to get through the long flight was to keep my intoxication level just under Judy Garland territory, so I refrained from singing).

Upon my return, the Number One Question – other than “How was the food?” – has been “How was the flight?” I’ll be honest, sitting for 16 hours in coach is no picnic, and I’m a lazy person who generally enjoys sitting around and doing nothing. Although I am not a tall person, my legs started freaking out at one point and I had to get up and walk around and perform some light calisthenics while waiting for the lavatory.

But for as kind of shitty as the flight was, I’d do it again in a second just to see our friends’ faces as we made our way out of baggage claim to where the five of them stood anxiously waiting for us. 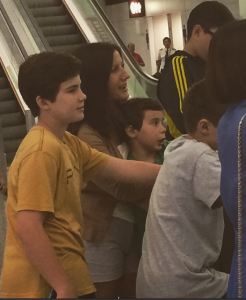 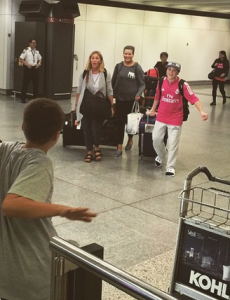 It was an amazing moment and had I not been so delusional at that point, I might have thought of something more emotional/sentimental to say to them other than the first thing that popped out of my mouth, which was, “We’re in fucking China.”

And that brings us to Hong Kong.

(And visiting Asia was never on my bucket list of places to go. Who knew?)

Being cooped up on a plane for 32 hours (look, I’m doing math) is a small price to pay to be able to visit Hong Kong. It’s stunning – lush, green mountains alongside a dazzling skyline and surrounded by the greenish-blue South China Sea. And there is so much to see and do. 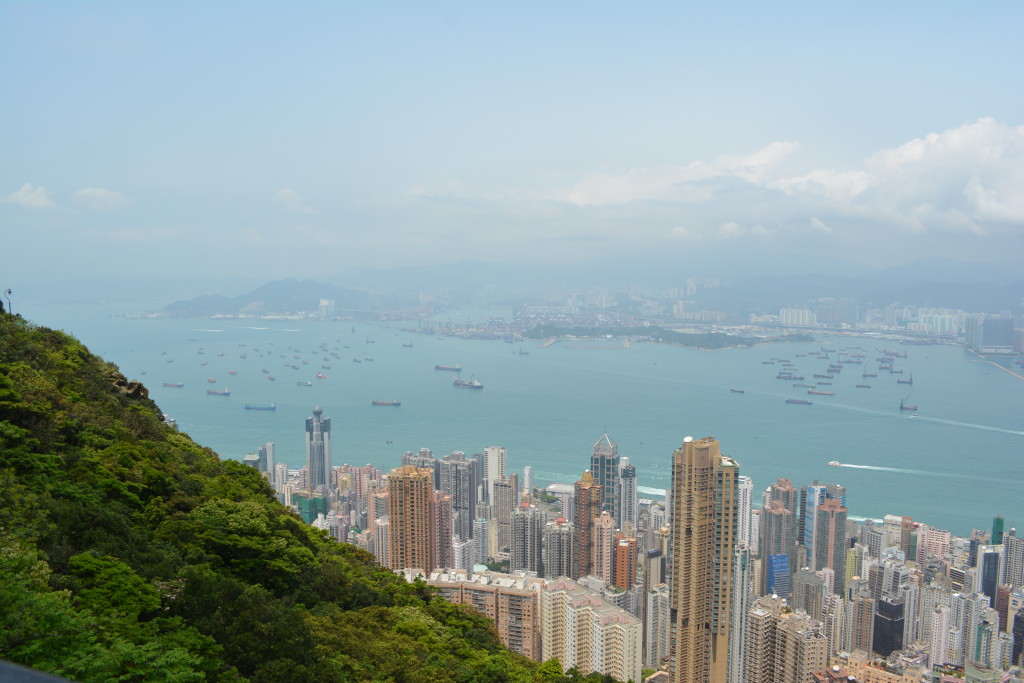 The view from atop Victoria Peak. 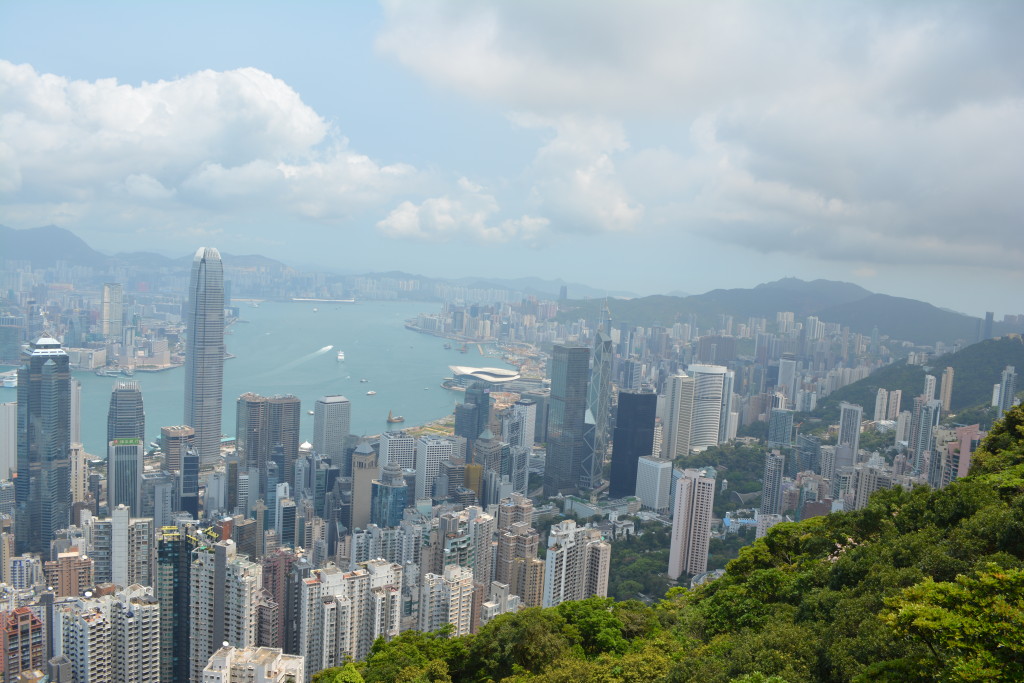 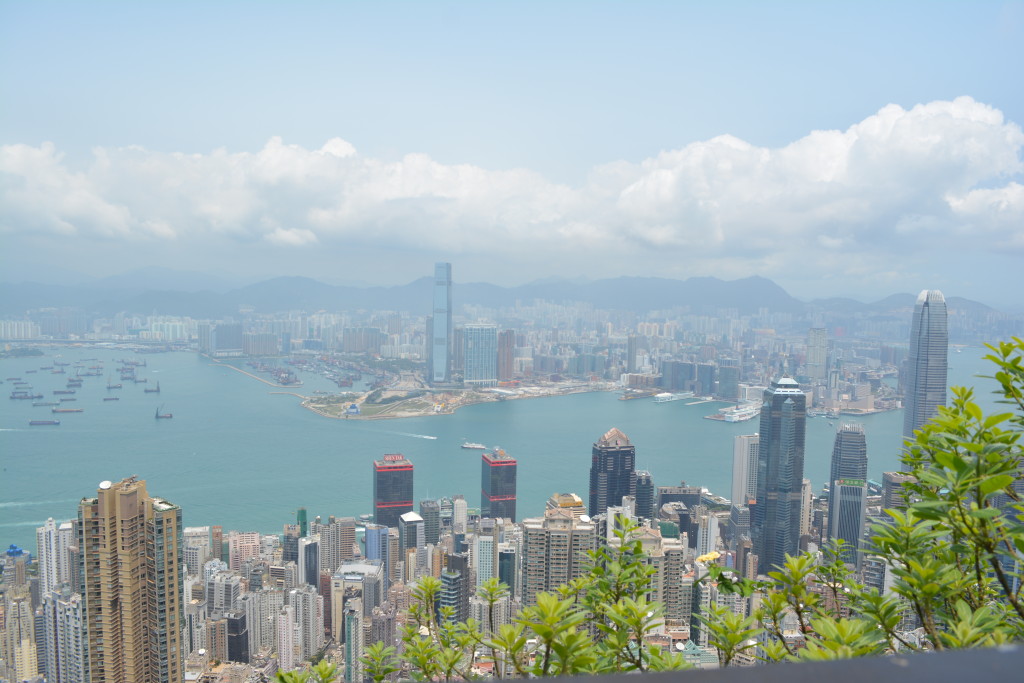 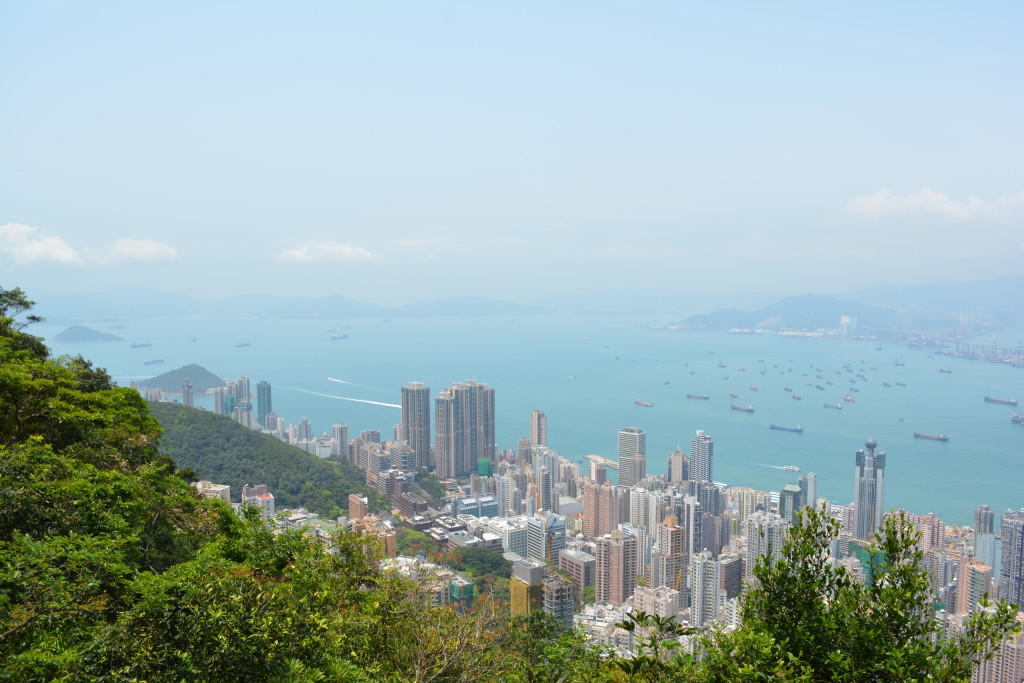 For those of you who don’t know — and really, until my friends moved there, I knew not one thing about Hong Kong (other than the whole British relinquishing colonial rule in 1997) — Hong Kong is kinda where East meets West. Everybody speaks a little English (except the Cantonese-speaking taxi drivers). You can find a burger and pizza alongside dim sum and fish balls, sometimes right next door to each other and sometimes on the very same menu. It’s interesting. There’s even a Hong Kong Disneyland.

Hong Kong at the bottom of China and is composed of four main territories. My friends live on Hong Kong Island in the southern section near the beach and to the north of the island lies the city and the bustling Victoria Harbor. Across the harbor is the city of Kowloon, which is at the bottom of China’s mainland, but still a part of Hong Kong proper. It’s actually where the tallest building in Hong Kong is located and where you can find markets filled with weird things you never knew people wanted to buy. Or own. 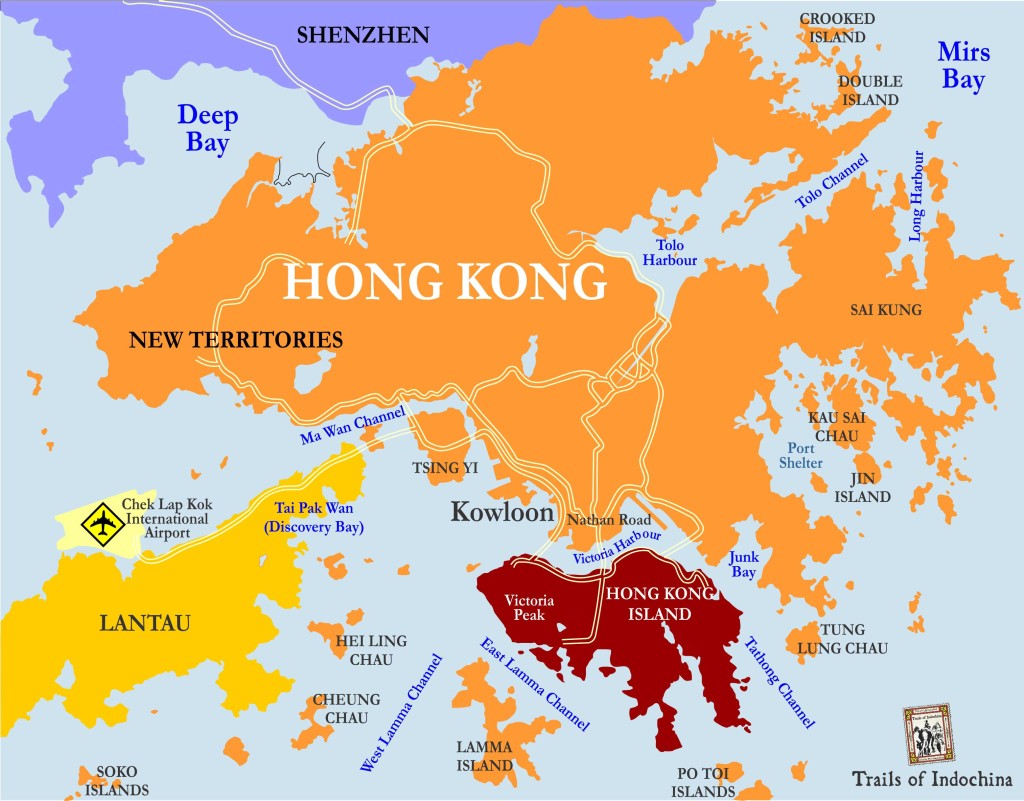 All this shiz is happening at the bottom of China. We mostly stayed on the red part, Hong Kong Island.

Traveling to Asia let me experience something so unlike my life here in New Jersey – the sights, the sounds, the smells (and some of you more snarky folks might have thought New Jersey had the ripest odors of all) – that I think made the trip not only a memorable experience but an important one for all of us, especially my kids. I really think the journey will prove to be life changing for them because now they know just how big the world is. And kind of how small it is at the same time.

It was so satisfying seeing my two children — who are in their prime obnoxious teen years — just get it. They totally got how lucky we were and how special it all was.

Over the course of our week-long stay we did lots of amazing things, like jump off a junk boat … 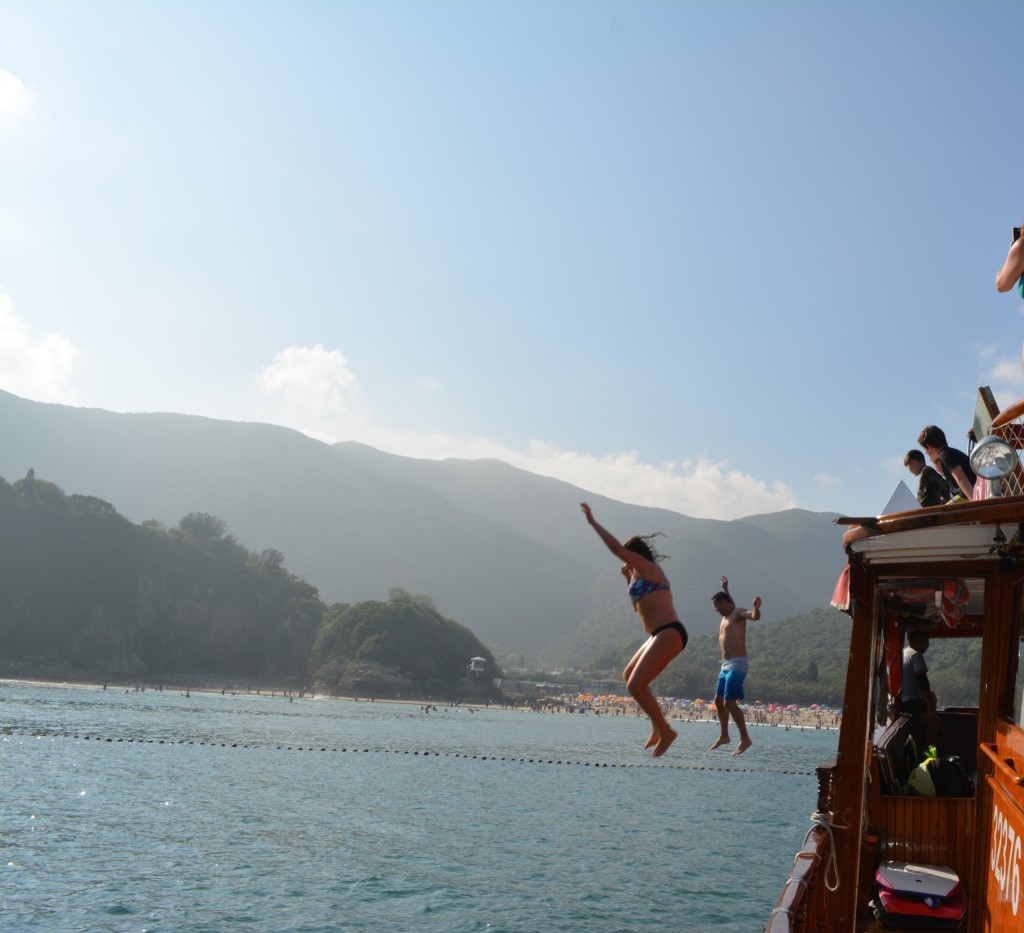 This is how we celebrated Easter, jumping into the South China Sea. 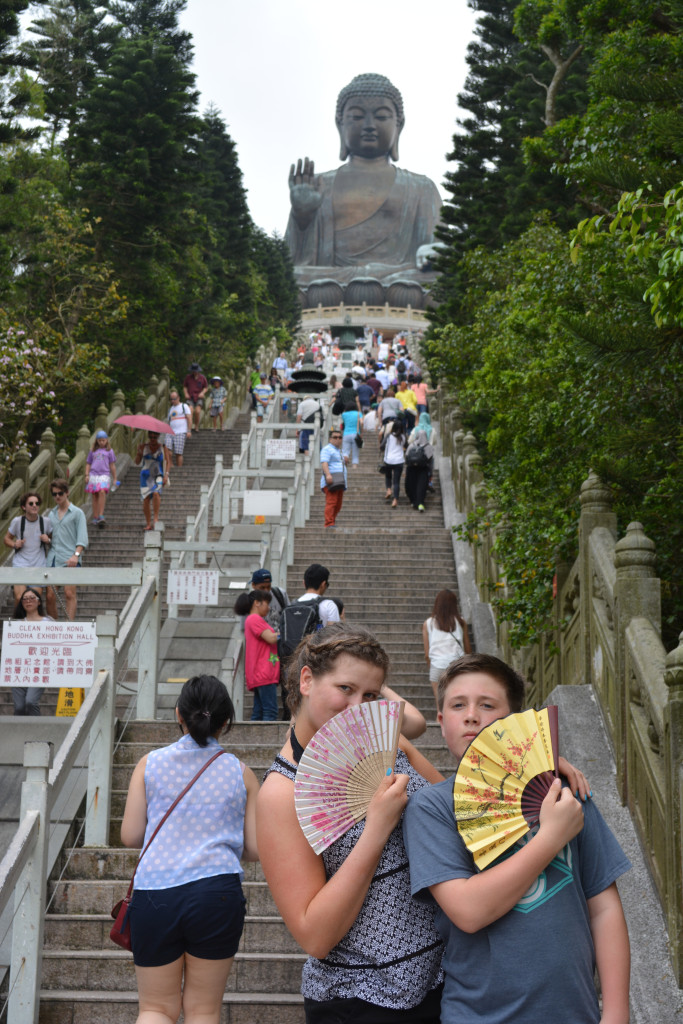 The Big Buddha on Lantau Island.

… take a terrifying ride in a clear-bottomed gondola … 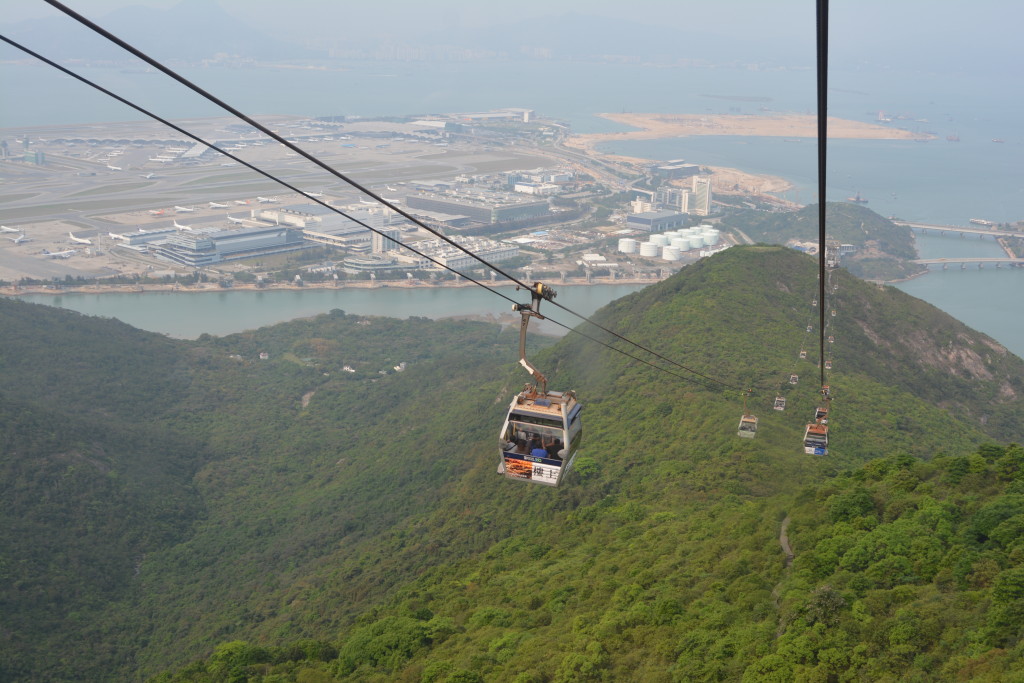 “Try not to think you’re in China,” I kept telling myself during the 25-minute ride.

… and walk around a local fishing village. 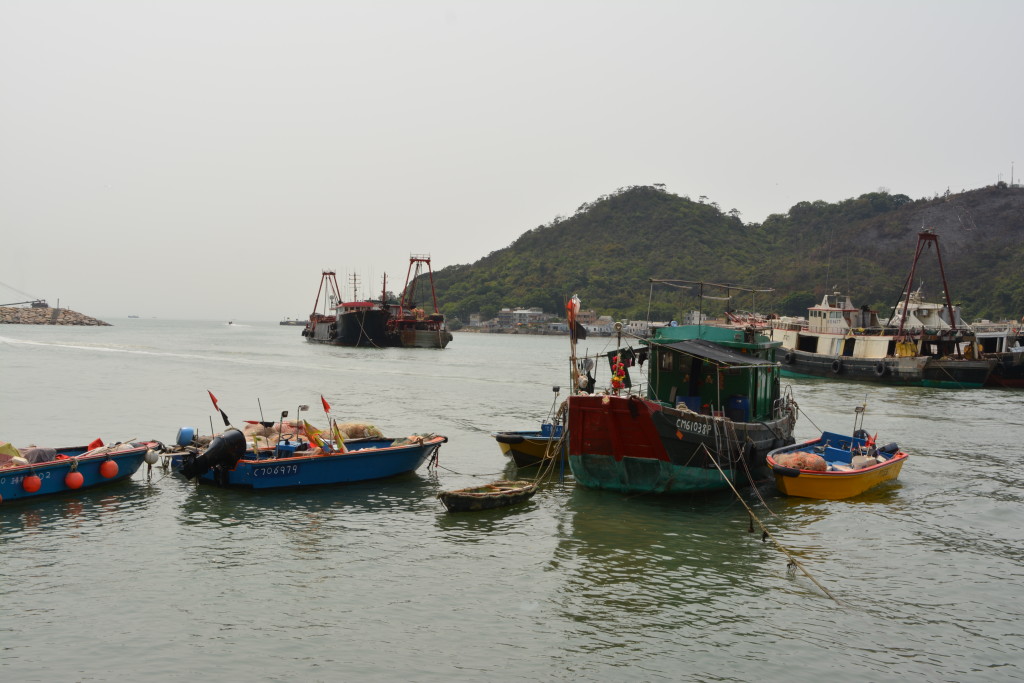 I’ll share more pictures and all the details over the next few days.

In the meantime, here’s the bottom line: Do not let fear stand in the way of going to new places and doing new things. There is a whole great big world out there — and things to discover right around the corner, too, not just on the other side of the globe. The experiences and the memories more than make up for any anxiety you may feel bubbling within you.

I know they did for me. 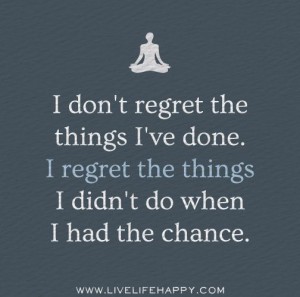 Make this your motto. Credit: Livelifehappy.com

6 thoughts on “My Hong Kong Trip, Part One”