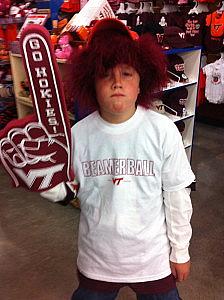 Anyone who has seen the Hungtington Learning Center commercial on TV — “Face it! I’m not getting into college!” – has had the pleasure of hearing a dramatic scene taken from the pages of my own life.

Let me clarify: I am lucky in that I haven’t had anyone failing out of school. The kids have taken rigorous course loads, held down after school jobs and gotten involved in things like “Model U.N.” and played the saxophone.

But I am starting the third round of the college search process and while I just assumed things would get easier with each consecutive child—that there would be some type of buy-in at the very least – I find I’m running into the same bullshit now that I did a few years ago when my oldest was a junior in high school.

At issue is the broad assumption held by my children that going to college is a figment of their mother’s imagination. They act as if the four-year academic experience practiced by gazillions of people in the United States is some crazy scheme I cooked up, akin to the notion that beets are delicious and NPR is interesting.

They act like where they’re going to spend the next four years is my problem. They have failed to understand that that ship has long since sailed. I’ve already proved to be a fair-to-mediocre student more interested in a certain boy than things like homework and studying and ended up in a big, state school filled with a lot of people from New Jersey just like me.

And I’ll admit: It’s not easy preventing my own dreams and regrets from getting caught up in the process. There’s tons of things I wish I had done differently when I was their age – starting with turning off the TV in my bedroom – and see their futures as a chance to make better choices. A do-over.

But if I can put all that other stuff aside, what I hope my children come away with is expanded horizons. I want them to understand that while this little upper-middle-class-suburban-microcosm that they’ve grown up in is very nice, there is a whole world out there filled with all kinds of different people and different experiences. I want them to be open to the idea that the possibilities are endless.

Because it took me a long time to understand that the ideas I was operating under were way too small.

I am most surprised that my third child has proved to be as resistant to discussing college as her older siblings. It was no shock that those two quickly dismissed any conversations that began with, “So, do you see yourself at a big school or a small school?” or “What part of the country would you prefer?”

They seemed to view every question I posed as a personal affront.

My oldest son and I took a couple of trips to look at schools, driving together across highways bisecting Pennsylvania and along the Northeast coast, and we probably shared about 10 minutes of conversation for all those hours we sat side-by-side.

He’d sit next to me in the passenger seat, or if it was a really long haul he’d stretch out in the back of our SUV, wearing headphones from which blared some very intense-sounding rap music, drowning out not only any attempts at conversation, but the audio book I had downloaded for the trip.

There’s nothing like trying to imagine what it’s like to be shipwrecked in the Pacific or get a handle on characters’ crazy Swedish names with Lil Wayne and Eminem shouting vulgar and angry words in the background. It’s disconcerting.

But I am shocked that Kid #3 isn’t embracing my attempts at helping her find the right school. I actually thought that when her turn came to look at schools, we’d have a lot of fun going on tours together and talking about what we liked best here vs. there while lying on our beds at a Hampton Inn in some college town.

Those are the getaways I should have taken with her three years ago, when she still liked me.

I tried again to start a conversation about college at dinnertime the other night. She bristled as I wondered aloud if a certain state school might be worth looking at, and hissed, “I don’t know,” and I really felt like she was seconds away from barking, “Face it! I’m not getting into college!”

When I in turn got all snippy and informed her that the time had come, like it or not, to start talking about college, she agreed but then told me, “You just go about it in the wrong way.”

And I get it: She’s probably feeling like she’s under a lot of pressure (first round of SATs this weekend!) and in a little bit of denial.

Growing up is scary and talking about it makes it all seem so stinking real.

The Huntington commercial came on early this morning, while my daughter and I bustled around the kitchen with the TV tuned to the local ABC news that comes on before “Good Morning America,” and the familiar, “What about college?” line seemed to hang in the air.

We both looked up from what we were doing and made eye contact and laughed.

“I am so writing about this,” I told her.

And if that’s the only satisfaction I can derive from this whole stage of my children’s lives – aside from the joy of paying for it – I’ll take it.

6 thoughts on “What About College?”