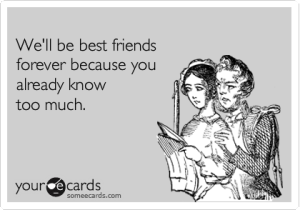 Thirty years ago this fall, I moved into a tiny single room in an all-girls dorm at the University of Delaware with another girl I’d never laid eyes on before who lived in a city I’d never even thought much about before at a school I’d never even visited before. And it all clicked.

Long after we’d become good friends – after spending months lying on our bunk beds and talking late into the night – she’d confided that based on my fancy-sounding street address she figured I was some New Jersey princess and given that she hailed from Baltimore, I assumed she lived in the projects. But our preconceived notions were quickly dismissed after we met and bonded our first night at school trying to haul a case of Busch beer, which we had talked someone into buying us, about a mile back to our dorm room concealed in a duffel bag. It turned out that when it came to underage drinking, we were both resourceful and well matched.

It was dumb luck that landed the two of us together and that we happened to get along so well. In 1984, decades before incoming freshmen hand-picked their college roommates on Facebook to coordinate color themes and bedding, you just showed up and hoped for the best.

The first indication that we belonged together was that we both ended up squished together in a dorm room meant for one person after we failed to submit our housing forms in a timely fashion. We were both pretty slovenly and liked to drink beer. I was introduced to George Thorogood and NRBQ and she tolerated my infatuation with Prince and the poster I hung of him on our wall. She brought with her a two-foot-tall red ashtray, one of those industrial type receptacles where you stub the butt out and then press a button to release it into the can. And because our tiny room became the hub for all of our new friends to come and smoke cigarettes and watch General Hospital most weekday afternoons, the can quickly filled up — which excited us to no end.

We both also brought our good friends from high school to college with us and they became our core group of pals at first. Over time, our gang expanded to include another girl in our dorm and a few more who we met through the sorority I rushed sophomore year. We were kind of a mismatched crew. Some of us would never have ended up friends with others were it not for the group as a whole. But beer and boys were a common denominator with a big dose of bossy thrown in. Somehow when we were all together – despite everybody wanting to be in charge – it just worked.

By the time we graduated in the spring of 1988, the eight of us had been through a lot – failed romances, missed periods and more than a few drunken nights. A few days before graduation we gathered in a tiny side room of the sorority house and passed around a bottle of champagne for each of us to sign and vowed to save it to drink when the last of our crew got married. We finally drank it in September 2000, when the final one of our crew got hitched and right before I celebrated my own tenth wedding anniversary.

How could we have known then, as we passed the cheap, fizzy wine around for each of us to sip, what the following ten years would hold? That three of our marriages would collapse and that the union we celebrated that night, dancing under the stars far out on the east end of Long Island, would be so short-lived? That in less than a year the groom would go to work on a bright September morning at the top of the World Trade Center and never come home?

Maybe in the end it’s the loss that all of us in the group has experienced in one form or another that has brought us even closer than those days when we piled on a couch to watch Moonlighting or borrowed each other’s Benetton sweaters for tailgates. Going off and living our lives became the glue that held our friendship together.

We’ve become so much more than the one-dimensional girls who met 30 years ago. All that loss – of spouses, parents and dreams of the perfect lives we thought awaited us – has let us connect with each other in a much more real way. We tease and joke and boss but there’s a softness to it now.

Inherently, we’re still the same girls we were 30 years ago – The Boss and Study Buddy, The Spy, The Nice One, the Senator (aka Honeypot) the fabulous Jet Setter and the GDI (Goddamn Independent). And I’m always good for laughs. We just have a lot more layers now. So much has happened since we signed that bottle of champagne all those years ago.

The eight of us gathered last weekend for a few days of eating, drinking and laughing as we have almost every year over the last decade. It’s an easy friendship, the kind where even though we don’t keep in touch the way we should and only half of the group is on social media, we can pick right up where we left off.

We’ve long since given up on the notion that we’re actually going to do something when we get together. We usually muster a walk along the beach or through a park under the bright autumn leaves, but mostly, we sit around and talk. And while we probably logged about 100 hours of conversation between the eight of us – on the couch over early morning cappuccinos or curled up together on a bed late at night after one-to-many glasses of red wine – I honestly cannot share any of the discussions with you because they were either too honest or too raunchy.

Most every conversation ended with someone turning to me and saying, “Do NOT blog about that.”

I was describing the group to another friend when I got home, and she laughed and said, “Sounds like it’s the family you get to pick.”

And maybe it is and maybe it isn’t, because even though I’m not sure if we would have picked each other 30 years ago – like in what world would you even think a nice conservative Visitation girl from D.C. would pal around with a Jersey Girl with big, permed hair? – somehow it all works.

But, much like family, over time you don’t love people despite their differences but often because of them. So maybe the secret to staying such good friends over 30 years is learning to appreciate people for who they are or maybe, just like ending up in a tiny room with some girl from Baltimore, it’s just dumb luck. 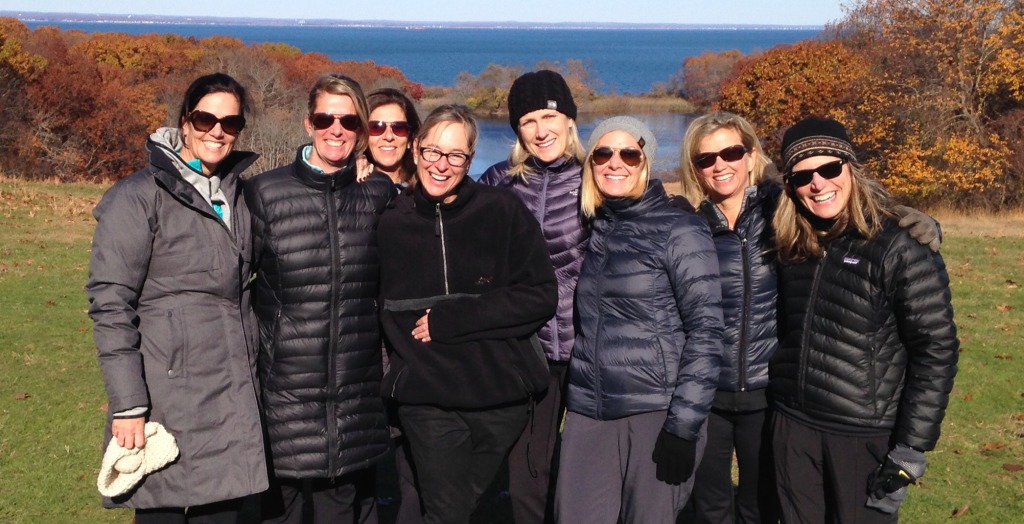 Don’t get left out of the loop! Sign up to get all my posts sent directly to your inbox. Just plug your email into the “receive new post in your inbox.”