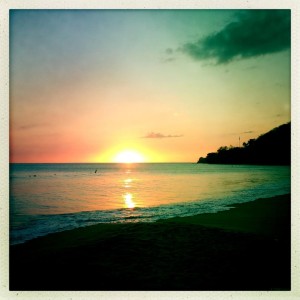 In theory, you would have thought I’d be happy they were leaving.

I mean, I scored a lot of swag over the last few weeks as my next-door neighbors frantically cleaned out their house so they could pull up stakes and move to Hong Kong this past weekend. They needed to clear out for another family in town who are renting their house while they’re gone.

Here are just some of the bigger items that I am the new – and in some cases — temporary, owner of:

This is not to mention the two shopping bags full of frozen and refrigerated items, about 10 bottles of assorted alcohol and one final bag yesterday containing everything from Trader Joe’s popcorn to a new bottle of Nivea lotion and Band Aids that I brought home.

I could have also had a cat, dog, bunny and various houseplants, but I drew the line at anything that required being kept alive. I can commit to quinoa but not animals, nowadays.

Initially, when my neighbor Susan started to offer various pantry items to me as she began clearing out her kitchen to prepare to move to Hong Kong for a couple of years for her husband’s job, I demurred. I was okay in the herbal teas and balsamic vinegar department and felt bad taking hers.

But then she told me how she tried to get another friend to take items from her pantry, and that friend also politely declined, and Susan said to me, “All I could think was: For fucks sake, please just take it!”

She needed us to help take stuff off her hands. It made her life easier.

So I stopped saying, “No,” every time she offered me something, which turned out to be a lot since I lived right next door, making it relatively easy to unload giant things like trampolines and saunas. I stopped feeling embarrassed or guilty for taking their stuff and saw it as something that made the giant move to the other side of the world with her husband and three young boys a tiny bit easier.

But of course, all the Kahlua and frozen Mahi Mahi steaks in the world could not make up for how much I was really losing. I told Susan that as we hugged good-bye in her garage Sunday morning as the giant black van waited to take her and her family and their 17 bags to JFK to fly to Hong Kong.

“You’ve been such a good friend,” I cried as we stood their hugging each other and she hugged me a little tighter and I thought about what an understatement that was. How critical her friendship has been to the quality of my life.

She was a major part of the safety net that kept me from falling to the ground during and after my divorce. She always included my youngest child – who’s 11 and around the same age as her boys – in whatever they were doing.

“Does he want to come over to watch a movie?”

“Does he was to stay and eat pizza?”

“Does he need a ride to lacrosse?”

“Does he want to stay at the beach with us?”

“Does he want to go to the movies with us?”

“Does he want to sleep over?”

It was always so easy and made the transition from stay-at-home mom to single working mom a lot easier.

She never said, “No,” when I asked her for a favor, never even hesitated or made me feel bad. She often asked if I needed anything if she was running to Costco or Trader Joe’s, and gave my family more free cupcakes from the cupcake business she ran on the side, than we could ever dream possible.

And she looped me into her group of friends — who have kids around my youngest child’s age — which helped me not only meet a great group of people but let me find a niche after my divorce and needed to find a place to set up my beach chair in the summer. She gladly welcomed me into her circle and had a spicy margarita waiting when I got there.

Her husband, Michael, was just as good. He was the boys’ lacrosse coach and helped us with the complicated equipment and always made sure my son was on his team, which came in handy this past spring when I forgot to pick my guy up from practice and Mike just scooped him up with his own kids to bring home.

“I literally forgot him,” I texted Michael back in May. “WTH is gonna happen when u guys r gone?”

When I first told my 17-year-old daughter that our neighbors, whose boys she has been babysitting since they moved next door seven years ago, were definitely moving to Hong Kong, she started to cry. “Not my babies,” she sniffled.

But we knew that the move was hard enough on Susan and the boys without us being all weepy in front of them, so we put on a good face. We talked about how exciting it was, this new adventure, and how they’ll be back in New Jersey with lots of stories to tell in a few years.

In the meantime, for the rest of us, it’s kind of like a temporary death. I’ll miss the day-to-day interactions, the ease of having someone just a few yards away who I can ask to borrow an egg or sesame oil or drive me to the hospital if I’m feeling especially crazy. I’ll miss being able to tell my son to go outside and see what the boys are doing and watching them all play soccer on her front lawn for hours on end. I’ll even miss all the pieces of crap they set up in my driveway as they practiced for their future jobs as professional skateboarders and BMX riders.

So when I walked around Costco and Wegman’s yesterday crying after they pulled out of the neighborhood, it wasn’t really for Susan’s family that I was weeping. They were going to be great. I mean, they already have a trip planned to Thailand in October.

To be honest, I was really crying for me.

Because I might have gained a sauna and lots of quinoa, but for now, I’ve lost some wonderful friends.

5 thoughts on “Gains and Losses”