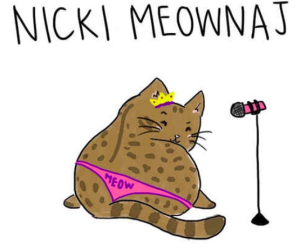 Recently, I’ve met up with two friends-of-friends on separate occasions who read my blog and both have remarked over the course of conversation that it was weird that they knew so much about me. One of them asked me if I also thought it was weird and I’ve gotta admit that I am pretty okay with relative strangers knowing about my divorce and my cat and the time my top almost came off at the beach.

One of the benefits of writing about my life and sharing it in a super-public forum is that it helps people put me in some context when we meet. I’ve already done the groundwork of telling you what I think you need to know about me and it then frees me up to ask a lot of questions. Having a public, one-sided conversation about myself also really jibes well with my raging megalomania. It also helps cut down on having to fill people in on what I’ve been up to. Whenever I get together with my college pals and we invariably go around the table to get the update on everyone’s kids and lives, they get to skip right over me. I start to tell them a story about something and they’re like, “Yup. Read about it. Next.”

Another interesting byproduct of this blog is that as the result of something I’ve written, I have been invited to attend a bunch of concerts. In fact, I’ve been invited to see four shows so far, two of which were dates (I sometimes joke that my blog also doubles as a low-cost dating site). But by the third round of hearing Stevie Nicks sing “Landslide,” I started to wonder whether there really is such a thing as too much of a good thing.

I really need to start aiming higher and writing about my dream to return to Paris or Rome. Or own a Cartier bracelet.

When I wrote recently about how I briefly thought about channeling Nicki Minaj and parlaying one of her songs into my theme song — a la Ally McBeal — a woman I knew reached out and asked if I wanted to go with her to Nicki’s upcoming concert at a nearby arts center.

“What the hell?” I thought and happily accepted after I ran it past my 18yo who had bought tickets months earlier for the show and had secured a ride home from her college four hours away to attend.

Here were her thoughts (I’m the one in the blue bubble):

No really, tell me how you really feel.

I assured her I would not be trying to hang out with her and her gang and really wanted to know very little about whatever shenanigans they had planned. All I knew was that my friend was bringing her 15yo daughter and a pal who would go off to their spots on the lawn and we would have legit seats inside the amphitheater.

I saw Rihanna a couple of years ago with about 10 other women in Atlantic City. We made a whole night of it and booked a few rooms at the now-defunct Revel and by the time she came on the stage at about 10 p.m., we had hit the perfect level of sobriety with which a mob of suburban moms should see RiRi which is to say we were all pretty bombed.

I had really expected a show on the level of what I’d read a Beyonce or Pink show would be, with elaborate sets and dance routines to accompany the singing. But I was sober enough to realize that Rihanna’s show consisted mostly of a lot of backup singers and dancers running around in sparkly costumes and grabbing their crotches. But I was surprised at how many songs of hers I actually knew and had forgotten how many of her tunes were hits I’d heard over and over on the radio. And because I have a teenage daughter, later I would come to love a lot of the songs from the album that Rihanna tour was promoting, which we’ve listened to a lot driving to and from various college campuses. I mean, “What Now” and “Get It Over With” are great songs.

So I went into Nicki Minaj with similar expectations. I figured I’d know a bunch of her songs from the radio and with a little bit of wine, the rest would be fun to listen to. At this stage of the game, I’ve let go of the anxiety I felt when my children were younger and I insisted we listen to Radio Disney-version of popular songs that helped weed out naughty lyrics and notions pushed on Top 40 stations like touching yourself and “S&M.” Nowadays I drive around in a car with the kids and request my daughter play Missy Elliott’s “Pass That Dutch” and we “hooty-hoo” and sing along.

Honestly, I don’t know a lot about Nicki Minaj. Like, she was cute in her role as Cameron Diaz’s secretary in “The Other Woman” and I saw on Facebook that she just had a fight on Twitter with Taylor Swift. And she has that number called “Boss Ass Bitch,” which was kind of the genesis of an essay I wrote and was inspired by until I listened to it and discovered it’s just a lot of rapping with insanely bad language and ideas (lots of p**** this and n***** that). Like, yikes.

And you guys know I like my curse words.

It turns out, Nicki Minaj’s ENTIRE lexicon consists of this type of song. I don’t even know if you can call them “songs” per se. It’s really just a lot of bad words strung together. But interestingly enough, even though I had no idea what these songs were, every other person in the entire arena did and rapped along with her. It was fascinating. I guess it’s like knowing all the words to “Thunder Road” or “Paradise By the Dashboard Light.”

Here’s a not-very-good clip courtesy of my 18yo:

A few other observations: Probably the biggest was that my friend and I were the oldest people in the stadium by about three decades. Legit. I noticed a handful of audience members sitting nearby who were obviously parents and not just really old Nicki Minaj fans. And much like Rihanna’s show, the choreography was fairly lackluster and consisted of a lot of gyrating and crotch grabbing. An attempt at sexy dancing that came off instead as some second-rate soft porn. I couldn’t really tell because my eyesight’s not what it used to be but by squinting at the giant video monitors it seemed that the backup dancers’ shiny gold outfits they wore to writhe around on the floor during “Anaconda” included zippers along their crotch seams. Talk about sexy.

So here’s what I worry about: What is Nicki Minaj modeling for my children? Is all her filthy-talk and see-through costumes (she does have an impressive backside) misogynistic or empowering? Here is a sample of lyrics from “Boss Ass Bitch”:

Or have I joined generations of parents who have fretted over the music their kids were listening to and declaring it the downfall of civilization? The Beatles and Elvis Presley seem positively quaint compared to the stuff on the radio today. The friend who so generously invited me to the show thought Nicki was amazing and had no issues with the content. So maybe I’m just becoming a fuddy-duddy in my old age, but my inner feminist struggles with whether or not she and her fans have been sold a bill of goods. I do, however, support her intentions:

If nothing else, the evening provided an interesting glimpse into what my kids are listening to when they’ve got their headphones on in the car. And it ain’t Radio Disney.

2 thoughts on “I Went to a Nicki Minaj Concert. Legit.”