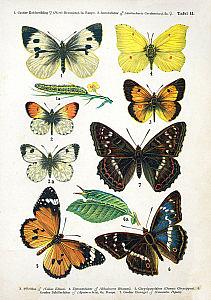 Here’s the benefit of dating someone who’s not really ready to be dating: You get to see how far you’ve come since your own divorce.

I’ve been trying to keep it in perspective. I’ve been trying to remember what it was like when I was in the thick of ending my own marriage five years ago. When my days were filled with attorney letters, financial spreadsheets and venomous texts from my soon-to-be-ex.

How I had to let go of everything to learn how to fly.

Contrary to what I thought I knew about metamorphosis, I recently learned that a caterpillar doesn’t just go into its cocoon and sprout wings. Instead, it dissolves into some gooey matter and then reshapes itself into a butterfly. It literally dies and comes back to life.

Curious whether butterflies remembered life before wings, scientists subjected a group of caterpillars to a horrible odor and subsequent terrible noise. Eventually, the creatures freaked out every time they came into contact with the yucky stimuli. Then, after the caterpillars transformed into butterflies, they were subjected to the same noise and stink and had the same negative reactions.

Memory carried through the metamorphosis.

I think it’s safe to say that during the whole terrible divorce process, the period when your adrenaline is kicked into permanent overdrive and you eat, sleep and breathe heartache, you are reduced to a puddle of goo. You’ve crawled inside whatever your chrysalis is – like a giant glass of wine – and start to let go of the person you were just days before. Everything you’ve known for sure up to that point begins to dissolve.

But eventually, you do become more of a fully-formed human being who can talk and think about stuff other than divorce, much to everyone’s relief. You’ve sprouted your wings and can feel the wind from them as you flutter through your days.

In an effort to recall my own dark days, I dug back into the journals I kept around that time. It turns out that during most of 2009, I was a bit of a wreck.

Witness an entry on Oct. 1 of that year in which I recount my reaction to learning my husband had just returned from a 10-day trip to Italy with his girlfriend after we had split up just three months earlier. “My pain is searing,” I wrote. “My agony has no end.”

I then recount how, in what in retrospect could only be described as a psychotic break, I tried to smash the Murano heart necklace the pair had brought home as a gift for one of my daughters with a giant bottle of Bumble & Bumble hair conditioner. I pounded it repeatedly with the heel of the oversized plastic bottle like a crazy woman.

I had forgotten about banging the shit out of the necklace, a symbol of how seemingly easy it was for my husband to move on with his life. How easy I thought I was to replace.

Turns out, Murano glass is pretty fucking shatter proof and held up to the attack, which could also be a handy metaphor for my own seemingly-fragile heart. It, too, survived a pounding.

But I never would have remembered that incident if I hadn’t written about it in 2009. Turns out, my memory of that gooey stage of my life is pretty sketchy. I can recall big moments, like the day we stood in front of the judge in the seedy courtroom and ended our 20-year marriage. But the day-to-day occurrences, all that yucky stimuli that I reacted to during that tumultuous time, have started to fade from my memory.

I think it’s a matter of self-preservation.

But here’s something else I learned about metamorphosis: that memory also works in reverse. If you carefully peeled back the skin of one of those tiny caterpillars, you would find structures within of the future butterfly: Microscopic wings, antennae and legs.

And I think if you had peeled me open in 2009, you would have found — deep inside — pieces of the girl I was to become.

27 thoughts on “The Stages of Divorce”