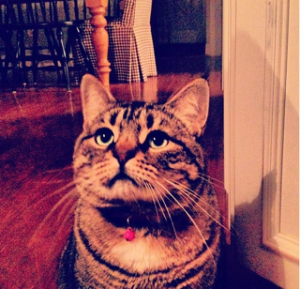 The other night I was sitting on the big, red couch in my TV room, all cozy in my pajamas, watching the most recent episode of ‘Fixer Upper‘ – my latest TV obsession. I was never really much of an HGTV person — but my 17yo totally is –and we wasted a lot of time recently watching ‘Property Brothers’ and ‘Love It or List It’ when she was home sick for a week with the flu.

But our fave home improvement show nowadays is ‘Fixer Upper.’ If you don’t know, ‘Fixer Upper’ features the most adorable couple — Chip and Joanna Gaines – who help other couples find and fix up houses in and around Waco, TX. They have amazing style; it’s all charming, farmhouse-looking remodels with lots of cement countertops and ship lap (I know, I’d never heard of that either).

Even my little guy is hooked on the show. The 12yo told me the other day that when he makes it big as a video gamer (sigh), he’s going to buy a house for us in Waco. What a guy.

We watched so many episodes of ‘Fixer Upper’ while my daughter was recuperating from the flu that we started to feel like Chip and Joanna had become our really good friends. We cheered when Jojo nailed a flip on the trampoline in front of her four little kids in one episode and shook our heads when Chip ate a bug in another. In fact, while we were sitting around in our pajamas one day (obviously I try to spend as much time as possible in my pajamas), my daughter Snapchatted my reaction to Chip plowing through a wall:

So anyway, I was sitting there on the couch when the cat jumped up next to me. She is not a snuggly creature and usually keeps her distance, licking her belly or snoozing for hours on a nearby chair, so I thought, “Oh, how cute. She wants to snuggle.”

I turned my attention back to ‘Fixer Upper’ when suddenly I felt something warm and wet spread across my back.

“Holy shit!” I yelled and jumped up to find the cat urinating on the couch next to me.

Legit peeing, right there on my couch.

She looked up at me, gave her back legs a big stretch, and hopped off the couch like everything was fine-and-dandy.

And since then, I have watched her relieve herself on my couch, a fairly new and nice couch, at least two more times. And while most of my children’s responses to this behavior has been, “Can we please get rid of her now?” the Cat People that I polled suggested she might be struggling with a urinary tract ailment and suggested I take her to the vet.

Okay, some backstory: this cat just appeared one day in my garage in the middle of a snowstorm, a bag of bones and with the side of her face burned. We felt bad and took her in and she set about establishing herself on the family food chain somewhere higher than the dog but lower than me. Her weapon? Pee and poop. She constantly peed on the dog’s bed and pooped once on my side of the bed and whether she succeeded in replacing me as the alpha chick around here is debatable, but she did prove her tenacity.

So the prospect of having to get her into a carrier to get to the vet made me very nervous. I had to have a pal come over and cage her during the Hurricane Sandy aftermath so I could board her until our power was restored and it was like trying to cage the Tasmanian Devil.

I ambushed her one morning last week and wrapped her in a beach towel and dumped her in the crate and headed – with my heart pounding – to the vet.

Three hundred dollars later (more sighing), they drew some blood and told me they could not access her bladder and sent me home with a kit to collect a urine sample myself.

But somehow I managed to trap some pee the other morning and enlisted my 12yo to hold the sample vial while I sucked pee into a syringe CSI-style and dropped if off at my vet.

Good news, I got a call from the vet Saturday morning and everything came back negative. Her blood work seemed normal and her urine was clean.

The vet suggested I rethink the type of litter I’m using. She also gave me the name and number of a local woman she calls the “Cat Whisperer.” She’ll come over and assess the situation and help you modify the bad behavior. And it should only cost another $100 or so.

Oh, or I could try putting the cat on Prozac.

And of course, these things only happen at the most inconvenient times, which means I was going away for the weekend and had to go to Home Depot to buy plastic tarps to cover all of our furniture while I was gone.

So that’s pretty much where we stand. I’m headed out to buy a new kitty litter box in the event that the current one is not meeting the cat’s urination standards. And then I’m actually considering hiring the Cat Lady to come over and try to reason with her.

But so far, there’s no moral to this story – as far as I can tell – other than pets are a pain in the ass.

Maybe I should just consider sending her to Waco.

Got any suggestions? By all means, send them my way. As long as it doesn’t cost me any more money.

While you’re at it, sign up to get all my posts sent directly to your inbox. Just plug your email into the “receive new post in your inbox.”

20 thoughts on “When Pets Lose Their Marbles”