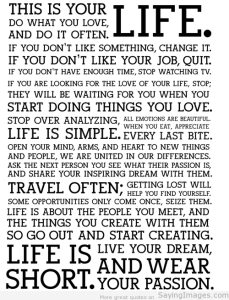 This print sits on my desk and is referred to often as I try to make sense of things in my life.

One day, during the early days of my divorce – when I lost 10 pounds in a week subsisting on wine and carrot sticks – I went to get my brows waxed (and mustache if you must know) and spilled my tale of woe to the woman grooming my facial hair.

Aside from my therapist, my brow and hair coloring ladies serve as important sounding boards for my life. I’ve been going to them both for so long, they knew me when I was a brunette with babies instead of the blonde-of-a-certain-age I am today.

So after I filled her in on what was going on, I laid still on her table as she tweezed away and talked. She explained that I had just entered a dark tunnel of my life, with no light yet visible on the other end. She said I could see the light from the entrance growing dimmer, but had to just keep moving forward and have confidence that at some point, I would see the light again.

I can’t tell you how often I thought of that tunnel metaphor as I moved through the darkness of my divorce. How often I wondered if I’d ever see the light on the other side and then, finally and without warning, I could see a little pinprick of sunshine coming through the other end.

As I sat up on her table, the paper crinkling as I adjusted myself, my brow girl reached down and pulled a silver cuff bracelet off her wrist and said, “I want you to have this.”

It read: Be true to yourself.

I read the words etched into the metal and as I slipped the thin bracelet on, became emotional as I told her how special it was. It became a part of my armor that helped me get through my darkest days and reminded me why I had to go through the pain and sorrow of divorce. It reminded me of whom I needed to be.

I wore that bracelet religiously for about two years – I never took it off — and then, one day, I returned the favor. I was with another woman struggling with similar bullshit and slipped the bracelet off and gave it to her to wear. “Be true to yourself,” I told her.

Because I no longer needed to look down to be reassured by those words. I had read them so many times that they had become etched on my own heart. I didn’t need a piece of jewelry to remind me I needed to honor who I am.

Who is, of course, some chick with nice eyebrows and no mustache, at the very least.

13 thoughts on “Being True to Yourself”