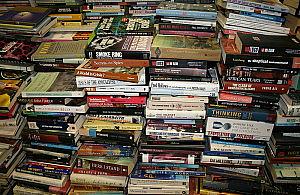 This is totally not what’s happening in my bedroom. That would be weird.

I have a grotesque number of books stacked around my bedroom. Like, I hesitate even taking a picture of the situation, lest you think I am a total nut.

There are young adult books that my daughter has recommended, like Rainbow Rowell’s “Attachments.” Some novels lent by my friend and fellow writer including Ann Pachett’s “The Patron Saint of Liars” and the new Sue Monk Kidd book from another reader friend. There are books on writing screenplays and memoirs and just writing in general, a few by Dani Shapiro (who I actually have been reading lately). Something called “Yoga and the Quest for True Self” that I will probably never get around to and of course, self help books galore – like “The Five Love Languages,” that sounded like a really good idea at the time I ordered it off Amazon late one one night. And then there’s “Middlemarch.” Fucking Middlemarch. It’s like always there, all 853 pages of it, just mocking me since I started reading it on a sailboat in the middle of the Aegean last August. Reminding me of all that I’ve yet to have accomplished.

My Kindle is also not immune to the log jam of unfinished and never opened reads. “The Husband’s Secret” lost me once we found out what his secret was and I only read a few of the short stories, I am ashamed to say, in George Saunder’s “Tenth of December.” I never even started Katherine Boo’s “Behind the Beautiful Forevers” or Elissa Schappell’s “Blueprints for Building Better Girls.” Then there’s Pete Hamills’ “A Drinking Life,” Stacy Schiff’s “Cleopatra” and the third installment of “The Game of Thrones” series I never got around to, probably because I’m so busy watching it unfold on my television. But don’t worry, all three Fifty Shades of Grey books were quickly and thoroughly read because they are the literary equivalent of eating a bag of Doritos in one sitting. Great at the time and thoroughly addictive but in retrospect, kinda unhealthy.

Anyway, not to get all ambitious, but I think this summer is the summer I start getting through all of the reading material I actually spent money on. I mean, if you tallied the costs of all the unread books both physical and digital I have purchased, it’s got to add up to at the very least, a really nice pair of shoes (which is another item I probably own more of than I really need).

So, as part of my plan to spend my afternoons this summer accompanying my little guy to the beach so he can Boogie board his heart out in the cold Atlantic surf with his little buddies, I would like to spend my time reading stuff I already own. Maybe with, like, one exception.

So, I think my top five books to start will be:

What have I read lately?  Well, I just finished the recently-released novel “Bittersweet” the other night, which got amazing reviews in Entertainment Weekly and People but left me sort of cold. I was hoping for more of a shocker at the end after the whole build up throughout the novel that, according to Amazon, “exposes the gothic underbelly of an idyllic world of privilege and an outsider’s hunger to belong.”

I finished Julia Fierro’s “Cutting Teeth” last week, which was a fun skewering of a Brooklyn play group that goes off to spend the weekend at a Hamptons beach house and plenty of hipster angst ensures. It’s the perfect smart beach read and kind of made me glad I had teens and not toddlers to deal with nowadays.

What about you? Do you feel bad about all of your unread books or are you better at reading what you already own (maybe that’s my problem, that I always want what I don’t already have)?

And don’t forget to let all of us know what’s on your summer reading list for all of those good people that don’t have already have a queue of books lined up next to their bed or in a cloud somewhere.