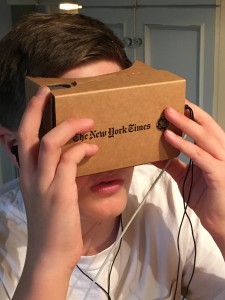 As the opening scene of the original “Star Wars” movie unfolded on our TV screen Saturday night – the mammoth underbelly of the Imperial Star Destroyer slowly crawling into view – I turned to my 12yo son and said, “Dude, you don’t even know how amazing this was back in the day.”

That is, I would have liked to have said this to my child but instead, I said it to the mound of throw pillows he’d dug himself under to better fool around with the new iPhone we’d bought for me earlier that day. The kid may not know how to get a dirty pair of corduroys into a laundry basket, but man, he knows everything you need to know about the iPhone 6s. He’d already seen “Star Wars” and given the magical machine in his hands that does things we’d never dreamed we could do 38 years ago, he was pretty unimpressed with tractor beams and light sabers. They were so 1977.

That first “Star Wars” movie – you know, if you’re of a certain age it’s not the fourth “Star Wars,” it’s the original, and it’s really the only one worth watching – came out the summer I turned 11 and I probably saw it in the movie theater at least five times. I loved the action and adventure. The feisty princess (projecting). The bad boy Han Solo (foreshadowing). The comedy. It cemented my love of all-things fantasy and is probably the reason one of my favorite books of all-time is The Mists of Avalon and how I became a dedicated “Game of Thrones” fan.

But aside from all the elements of the story, I was wowed by the movie’s special effects. I mean, after growing up on a steady diet of “Lost in Space” and “The Jetsons” that all of us children of the 70s ingested, this take on a futuristic outer space felt so real. This wasn’t just robots cleaning up after us or screaming, “Danger!” We felt like we were there, speeding through space in our rebel ship to save the universe from evil. We could feel the energy level shift when Darth Vader entered a room or when Luke Skywalker removed his fighter helmet to use The Force and blow up the Death Star. We were right there.

My son was off from school on Friday and as we ate breakfast we watched a segment on “CBS This Morning” (thank God Charlie Rose has not succumbed to hashtags and what’s trending) about students using these cool cardboard viewers from Google that brought lessons to life. In the piece, we saw that the kids were learning about the ocean reef and my son and I agreed those magical viewers would be awesome to use in school.

And then one arrived in our driveway the next morning.

As part of its new foray into virtual reality, The New York Times sent its Sunday paper subscribers their very own Google Cardboard headsets to view movies that were created based on content in the paper. You download an app to your smart phone and can become immersed in the story when you look inside.

My 12yo son quickly put the thing together, downloaded the app, velcroed his iPhone inside the box and became engrossed in the little box of cardboard with his headphones plugged into his ears.

I watched him turn his head from side to side and then, with the viewer pressed close to his face, look down towards the ground and wave his hand in front of the viewer. Even he couldn’t believe what was happening. When he was finished, he reported he watched a movie about a French artist in New York City and another about refugee children and described a bit of each movie and encouraged me to watch for myself.

But I wasn’t super gung ho at first. I’d heard, of course, of virtual reality. I’ve seen people on TV wearing headsets to play video games and aren’t there whole movies based on the concept (hello, “The Matrix” series?). I was just kind of skeptical that it wouldn’t live up to the hype. You know, like, the reality part. Plus, I wanted to eat lunch.

And then I put the cardboard box up to my face and my son pressed play.

I finished watching the first movie – it’s about 10 minutes long – which immerses you in the back story of a recent NYTimes Magazine cover photo. You look up and see the city’s skyscrapers and down to see the city’s sidewalks and all around people are walking or standing and things are happening. And I don’t want to spoil the end but if you are afraid of heights, do not look down.

I pulled the viewer away from my face and said to my two sons standing in the kitchen, “This is a crazy, crazy world.”

I mean, who would have thought? This was probably what it felt like when our grandparents watched a man walk on the moon on their televisions.

While that short movie showed off the tricks of virtual reality, the film that supplemented this Sunday’s magazine cover story, “The Displaced,” turns a spotlight on the plight of the 30 million children around the world driven from their homes and proves why virtual reality is such a compelling new medium for storytelling.

The movie focuses on three children who have been displaced by upheaval in different regions of the world. Twelve-year-old Hana is a Syrian refugee whose days begin at 4:00 a.m. to go pick cucumbers with her family in Lebanon.  We get into the truck with her under the still-dark sky to drive to the field and watch her haul crates of vegetables atop her small shoulders. “In Syria we had lots of toys and things to do,” she says in a voiceover as we watch her and a bunch of other children drive home at the end of the day in the back of a pickup truck. “Now we just have each other.”

Oleg is 11 and lives in the rubble of his Ukranian village that had been decimated when fighting broke out in April 2014. You see him and his buddies picking their way through the debris of a schoolroom as he says that they used to joke about how great it would be if their school was bombed. “I’d never say that now,” he says.

Finally, there’s 9-year-old Choul whose family escaped fighting in his village in South Sudan and is now living in the legit swamp. We go for a virtual ride in the back of his crudely-made canoe as he paddles through the reeds and listen as he says he’s heard that although a death by crocodile — which they’ve spied — would be slow, it would be better than being killed by the fighters.

But the most profound moment for me was a scene that I found myself standing in the middle of a Sudanese field with dozens of refugees — mostly women and children — as sacks of rice were dropped from a plane flying high overhead and watched as the refugees rushed in to claim the heavy bags, hoisting  them over their heads and shoulders. I could only thank God or The Universe or my Lucky Fucking Stars or whatever it was that blessed me so that I did not have to run through a field to claim my food. That there by the grace of God I had been saved from that life.

Because this – along with bombed-out schoolrooms and little girls who are sleeping in tents and waking in the middle of the night to pick cucumbers all day, is a reality for 60 million people, half of them children. And I am so, so very lucky that for me, that reality was virtual. I am so grateful for all that I have been blessed. But I am also grateful – to Google and The New York Times – for letting me experience what that reality was like more powerfully than I ever could have imagined through just words and pictures (and I really love words and pictures).

Being immersed in these three children’s lives – however briefly – was a reminder of our humanity. How, despite where we live and what we worship and the color of our skin – we are all the same. We are parents and children, sisters, brothers, wives, husbands, friends, human beings. We are people of the world and it seems to me that what really separates us is dumb luck. It’s just luck that I was born to parents of means in the United States rather than in war-torn Syria, the Ukraine or Sudan.

It is through some stroke of luck my 12yo sleeps at night in peaceful New Jersey on a bottom bunk under a starry comforter surrounded by Pokemon stickers. That he gets up each day and eats a pork roll and egg sandwich before school. That his greatest fear is the zombies he’s seen on TV and being wrestled by his older brother. And he carries a magical machine in his pocket that gives him access to things I would not have thought were possible when I was 12.

And that this is our reality, I am eternally grateful.