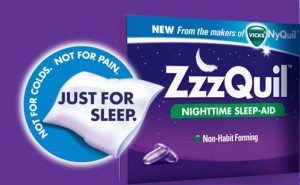 “Bad news, sister,” my college friend said to me over breakfast a few weeks ago when I went out to spend a weekend at her place on Long Island. “All that Zzzquil could be making us crazy.”

“Oh great,” I thought, “Let’s add this to the ever-growing list of things that keep me up at night.”

Apparently, our sleeping aid of choice – those pretty purple pills she introduced me to a year earlier when our whole college gang convened at her house – has been found to accelerate dementia. Her husband had sent her a link to a study that determined that drugs containing anticholinergic medications – like Benadryl, Tylenol PM and Zzzquil – have been linked to early onset dementia.

“I think that ship has sailed,” I told her, “because I can’t remember a goddamn thing.”

I could cite a million instances of my increasing forgetfulness, if only I could remember them. I mean, some big whoopsies stand out, like this summer when I discovered while standing online at the DMV to renew my driver’s license one Wednesday morning that I was supposed to be at a rest stop on the Garden State Parkway meeting a bus — and my mom and sisters — to go into the city to see a matinee performance of The King and I on Broadway. To my credit, I hauled ass into the city and joined them just as they were ordering lunch and consider the horrendous traffic I encountered trying to exit the city via the Lincoln Tunnel later that day my penance for being such an idiot.

My short-term memory was in serious disrepair last weekend, like on Saturday when I ran home to grab some cash for errands and discovered when I got to the store that I’d forgotten the money (I did, however, manage to use the bathroom, check Facebook and apply a fresh coat of lipgloss). Oh, and then the same day I left my phone at my sister’s house after a visit to see her new baby and didn’t realize for a few hours it was gone. PS: she lives a half hour away (I did, however, get to hold that sweet baby again).

Five minutes ago I found myself walking up my stairs and thought, “That’s weird I’m going up here to use the bathroom. Why aren’t I just using the one next to where I’m writing?” and it was only as I headed back downstairs to write an essay about forgetting things that I realized I had gone upstairs to get a tool to operate on the skin around my thumbnail that’s been driving me crazy (NOTE: another thing I keep forgetting is that I should refrain from working with on myself sharp instruments because it never ends well).

Obviously, this slippery memory of mine could be a product of all the sleeping aids I’ve been gobbling over the last year. I pause every time I raise the pill to my mouth, thinking, “I probably shouldn’t be doing this.” But then I recall the horror of lying awake for hours, unable to fall back asleep after a trip to the bathroom – rehashing my wedding day or some other bit of ancient history — that keeps my brain churning for hours in the dark. Then I quickly pop the pill and crawl into bed to enjoy the beauty of Benadryl-induced sedation.

Or it might just be because I’m getting old.

The subject came up yesterday at knitting – where a handful of women of a certain age gather ever few weeks to pretend to knit – and everyone sitting around the table littered with coffee mugs and skeins of yarn had something to say.

The hostess admitted that she lost not one but two credit cards on a recent trip to Vermont. Another woman said her sons were growing tired of showing up to pick up takeout for dinner only to discover their mom ordered from an entirely different location than where she sent them. That same woman also confessed she’d recently showed up for a mammogram appointment about an hour away from her home and after a lot spelling and respelling of her name for the lady at the front desk, determined that while my friend wanted to have the exam performed at that location, she’d made her appointment at an entirely different facility.

Another of my knitters said she’d found an effective way to keep track of things was to make daily lists in a notebook. “I bought a notebook but then I lost it,” one of the ladies shared.

Conversation eventually drifted to more pressing matters, like the newest season of Homeland and the holy-sexy-as-anything Peter Quinn. “He used to date Keira Knightley,” said my friend who couldn’t remember where she’d ordered tacos or mammograms. “They were engaged or something.”

I turned to look at her and burst out laughing.

“I know, this is what I can remember,” she said as she knit her shawl. “I can’t remember where I made my mammogram appointment but I can tell you who dated Keira Knightley.”

Although it’s fun for me to speculate that the sleep aids or the approaching menopause is wreaking havoc on my memory, I think the truth is that I just don’t pay attention. I’m totally not living in the proverbial moment. I’m thinking, thinking, thinking about what just happened and what’s next. I’m not focused on NOW. This is probably why I have to watch each episode of The Walking Dead twice and can’t remember a thing about any of the books that I’ve read.

And it’s not a new phenomenon. Long before Zzzquil and turning 50 were on my horizon, I was forgetting shit. Like one time I drove past my daughter in the Petco parking lot, forgetting to wait for her to get in the car to go home. And another time I got a call from a fellow mom in town who found my fancy Maclaren stroller stranded on the side of the road in front of the elementary school after pick up one afternoon. Apparently, I remembered to load the baby and other three kids in the car but forgot to fold up the stroller and pop it in the back.

To confirm my chronic forgetfulness, I texted my girls who are away at school to ask them if they thought I had a hard time remembering stuff. “I don’t know what you’ve forgotten!” texted the younger girl. “You forget everything.”

The older girl wrote that I forget little things all the time. “Like what?” I asked.

I don’t like thinking that I’m going through life disconnected. I really want to be engaged with the world and the people around me. I don’t want to forget the beauty of the waves crashing on the beach this morning as I drove with great friends for a walk on a perfect October day along the ocean. I want to remember lying in bed with my man-child last night, my 12yo boy who still lets me snuggle him, and the way he cozied right up and wrapped his arms around me (I would, however, like to forget his stinky pits). And for gods sakes I need to get a handle on what’s going on with those zombies the first time around. I’ve got too many things I want to do.

I just don’t know if I can let go of the Zzzquil.

10 thoughts on “In Which We’ve Lost Our Minds”