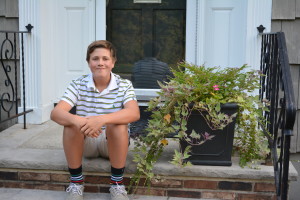 After 73 days and a lot of breath wasted on telling me there was “nothing to do,” my youngest child went back to school today.

And while a little over 10 weeks doesn’t sound so long in theory, when you’re trying to maintain a freelance writing career as well as attempting to keep things lively over here on my blog, that’s a lot of time trying to set up 12yo play dates and lining up rides to the beach.

But his older siblings got out of school in mid-May – a full month earlier – so if we add those additional 30 days to the mix, it brings the total number of days I’ve been interrupted by people making smoothies at 11 a.m. or catching up on all 10 seasons of “Friends” for days on end to a little over 100.

“That’s a third of 2015,” I told my pal the Girl Whisperer as he held onto the giant rubber ball I was squatting on top of yesterday morning.

“I thought you were bad with math,” he said.

I stopped to turn around and look at him and told him, “I had to learn how to figure out percentages of things after I got divorced.”

Maybe I would have fared better at math in school had I more at stake than just a bad grade.

But I’m not in the clear just yet. I still have my college grad home a few days a week as he tries to figure out how to be a grown up. Or at least, start taking steps towards adulthood.

But if he tells me he’s bored and that there’s nothing to do, I just might snap.