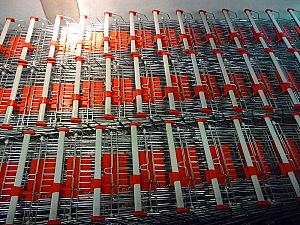 During the many years that I stayed home to care for my young children, I made it a point to avoid any and all supermarkets/warehouse clubs on Saturdays and Sundays. I could do that because I had the luxury of being able to hunt and forage for pantry staples like Pop Tarts and Tostitos while everyone else was at work during the week.

Monday through Friday, there were no lines at the Costco and Wegman’s that I frequented. I could park relatively close to the store entrance and move freely about the cereal aisle and could even – when necessary, and sometimes,  it’s totally necessary for the good of the shopping trip – easily navigate one of those carts with the little Cozy Coupe attached to the front to keep wily toddlers occupied while I stocked up on ground turkey and hamburger buns for dinners during the week.

But when I started working full time a few years ago – and even though I worked from home and was not necessarily shackled to an office desk – I was forced to join the ranks of the weekend warriors.

Once stuck with having to do my food shopping/errands on Saturdays and Sundays,  I observed something that, at least where I live, is seldom seen at Foodtown or BJ’s during the week: men.

And no offense to you guys, but from the looks of things, you don’t know what the hell you’re doing, almost like you’re on an episode of “The Amazing Race” and have just landed in a foreign county and you do not speak the language. You’re either staggering around the produce section trying to discern the difference between a shallot and a scallion, or clogging up the baking aisle while calling your wife to see whether she wanted the dark or light brown sugar.

It’s like when I had to send my then-husband to the supermarket to pick up some Kotex for me when I had my first miscarriage and apparently he looked so pathetic standing there in the feminine hygiene aisle — I mean this was a guy who couldn’t even stand to hear the word “period” — that some older woman took pity on him and helped him find the necessary lady products.

So imagine my consternation yesterday while doing my weekly food shopping and found myself waiting on a line of shopping carts trying to snake through Wegman’s bakery section on Super Bowl Sunday when I realized I DIDN’T HAVE TO SHOP ON SUNDAYS.

I could have waited until everyone went back to work on Monday, especially the jackass that held up checkout lane 7 yesterday afternoon because he wandered off to find something while his wife did the checking out and then reappeared about five minutes after the checkout girl had finished ringing up the order. He was all, “Huh? Huh? What? What?”

There is a place in hell for you, sir.

Sure, I’ll miss the free samples at Costco on Saturdays – who hasn’t made a meal out of those freebies? – but am willing to make that sacrifice if it means I don’t have to stand behind couples arguing on the checkout line or park the length of two football fields away from the store’s entrance.

Being unemployed has its advantages.