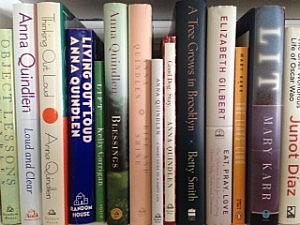 I don’t know what I’d do without my friends.

They lift me up when I’m sinking, listen patiently to my many stories mostly about myself, celebrate my victories, teach me to knit (and then tolerate when I show up for knitting with nothing to knit), critique my resume, go speed dating with me, invite me to their homes to write and always, always share their wine.

Seriously, between my family, my writing and my friends, I have a very full and happy life.

But aside from the friends I actually know, the ones I spend the day with learning how to shoot guns or going to see Ira Glass, I have a handful of people in my life who I consider to be my friends – I’m sure we’d hit it off – although we’ve never really met.

Now, this could be perceived by some as the very definition of what a stalker might say when found hiding in a stranger’s closet, so stay with me.

Throughout my life, there have been certain writers who have given me hope that I was not alone. Their voices sounded so familiar and they were able to put thoughts and ideas down in words that I, too, had felt but had never been able to express.

“That’s it!” I’d think, reading a certain sentence over and over.

Because on the most basic level, we humans need to feel connected. We want to feel like we’re not alone. It brings comfort to our lives and reassures us that we’re really okay.

When I was a kid, growing up in the 70s, Judy Blume did that for me. Her characters weren’t living on the prairie or trying to solve mysteries but were real girls, some of them even living in New Jersey (like me!), and were strong and had opinions and were confused about things like tampons and pubic hair and friends and boys and all the stuff that filled 12-year old girls’ heads. She let me know I wasn’t the only one struggling to make sense of it all.

I met Anna Quindlen when she was writing her “Life in the Thirties” column in The New York Times and although she was over a decade older than me, I could not only relate to what she wrote about, but it made me want to do the same thing some day.

When I was in the thick of my divorce, I was lucky enough to hear Anna speak at a small gathering about everything from her writing to her kids to politics — and even shook her hand — and later, would ask myself during my darkest days: “What would Anna do?” It became my yardstick for measuring what was acceptable.

Because i knew Anna Quindlen wouldn’t be taking any bullshit.

Then of course along the way I met Nora Eprhon and Tina Fey (the writer), who taught me you could be both smart and funny. I read Bossypants once and have listened to it while driving in the car at least four or five times.

And when I read Sheryl Sandberg’s Lean In, so much of what she wrote resonated with me and we seemed so similar except that she  ended up the COO of Facebook and I became a New Jersey housewife.

More recently, I’ve gotten to know Ann Patchett, Anne Lamott and Dani Shapiro and through their essays I am inspired as a woman and a writer.

I met my girl Kelly Corrigan, so to speak, when her first book arrived in my mailbox courtesy of one of my college pals who lives in D.C. and happens to be friends with Kelly’s college roommate. My friend had gone to one of Kelly’s book signings and for whatever reason, had thought of me and shipped the book to New Jersey.

The Middle Place was published right around the time my 18-year marriage was falling apart and while at that point I had a hard time focusing on reading things like the J.Crew catalog, I blew right threw her book.

She’s so likable – funny and smart, not afraid to laugh at herself – that I felt like I knew her. She could totally be a part of my college crew. She’d fit right in.

She came to my neck of New Jersey to read from the book not long after and patiently chatted with almost each and every one of us in the audience as we filed by where she was sitting to get our free copy of her book signed.

“Take notes,” she told me after I shared what I was going through and hoped to write about it some day. And it was that advice that I used to motivate me when I was feeling too sad or lazy to write things down in my journal. Ultimately, I ended up with an entire safe in my closet stuffed with cute notebooks from Target I filled with rants, affirmations and observations of that time in my life.

Last week, a sorority sister messaged me on Facebook to tell me Kelly was on the lookout for photos for a video she was putting together to coincide with the release of her new book, Glitter and Glue.

“You should send her that fantastic shot of you dropping your son off to college. Made me cry when you posted it,” she wrote.

So I did, and not long after Kelly asked if I would email it to her, which I gladly did as well. 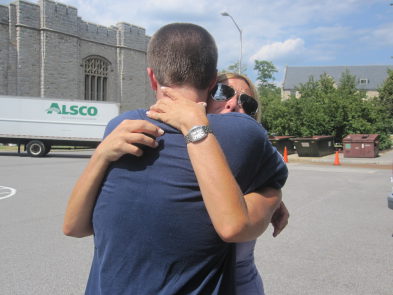 So yesterday I thrilled was to see the photo included (about 4:06 in) as part of a video that accompanies Kelly reading an essay about what she sees as the real adventure that life gives us. It’s the one that’s happening right now. This very second.

Whether we’re siting in the car waiting for basketball practice to end or giving the finger to our teenager behind her back (although some of us aren’t as good as hiding our displeasure from our kids), they are the pieces that make up life’s puzzle, along with Christmas mornings, kindergarten graduations and dropping your oldest kid off at college.

“This is it,” Kelly reminds us.

I’ve loved that picture since my daughter snapped it three years ago and couldn’t think of a better place for it to live right now, even if everyone gets to see my ugly cry.