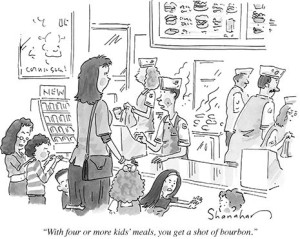 For 16 years, I had a child at home with me for at least a portion of the school day.

That is a long time to be restricted to scheduling dentist appointments, grocery shopping and personal grooming in between preschool pickup and drop off and nap times.

Those are a lot of years of organizing trips to the playground and MyGym classes and playdates to fill our long days. Many hours spent negotiating television watching, minutes left playing in the McDonald’s play area and drinking a glass of milk at lunch.

And when the day starts at 6 a.m., that’s a good 13 hours of crust cutting and potty mouth patrol. After about a decade or so, I was done.

At one point, I could see the light at the end of the tunnel. Could start to taste what it would be like to have all three of my kids in school for a full day, none of that two-and-a-half hour nursery school and kindergarten nonsense.

But then I accidentally got pregnant when my third child entered kindergarten and what would have been my home stretch became my freedom swan song.

Because when he arrived, this new fella even wanted to hang out in the middle of the night with me. For months. There was no escaping him.

I don’t know, maybe I wasn’t the ideal candidate to have four kids in the first place, but that ship seems to have sailed a long time ago.

Maybe I should have chosen a different route and gone back to work after my first child was born. But I’ve never been that ambitious. Except when it came to having kids.

And honestly, I also loved those early years home with little ones. I loved mornings spent at Gymboree playing with their cousins and then sitting down at the bagel shop for an early lunch before I took them home and put them down for afternoon naps. Maybe we’d head to the playground when they woke up and then back home for chicken nuggets and a soak in the tub and a story or two before bed.

It was easy and we were happy. Or at least, that’s how I remember it now.

And maybe that’s what I wanted to go back to the fourth time around: happier times. I joke that the kid was a booboo but that was hardly the case. I had tried for a few years to get knocked up with him and when things just didn’t seem to be going in that direction, I threw my hands up in surrender.

And immediately got pregnant.

But, as they say, you can’t go home again. There were too many things pulling me in too many different directions at that point – the three older kids, an increasingly-challenging marriage and my desire to get back to writing.

It just wasn’t the same.

So by the time that little guy was 5 and about to start his THIRD year of preschool (Pre-K since he’s a December birthday and missed the October cutoff for kindergarten), I made a last-minute decision to send him to a school that not only had a full-day program, they even provided busing.

I felt a huge weight lift off my shoulder after I signed him up and then went to an end-of-summer party and filled two women friends in on the recent development.

And was surprised by their reaction.

“Won’t you miss him?” asked one woman who had three kids, the oldest around third grade at the time.

The vibe both these moms gave off was that not wanting to spend all my time with my kids made me a bad mom. Or at least that was the message I took away that night.

But what they failed to understand was that stretching four kids out over 10 years had dampened my enthusiasm.

I super-love my kids, but I do not want to be with them 24/7. I don’t always want to be on call – to explain why I don’t want a lizard or pour a glass of milk or drive to the skate park or hear about how there’s no food in the house.

And after a good four months this summer of having at least one of the four kids hanging around eating Tostito chips or watching Netflix, the start of the school year yesterday nearly brought tears to my eyes. With the older two back at school for a few weeks, it was the last piece of the get-out-of-my-hair puzzle.

The youngest is starting fifth grade and his first year at the middle school in town and the teen-daughter is a junior in the public high school. I made them a big breakfast and complimented their straightened and slicked-back hairdos and we made sure to take lots of pictures before they left.

And when they were gone, I congratulated myself for once again having avoided committing any homicidal acts during the summer break — go self-control! — and poured myself another cup of coffee.

Then I got dressed and went about my workday and before I knew it, they were walking back through the door.

And it was great. I loved hearing all about their time out in the trenches. I wanted to get the scoop on all of their teachers, who was in their classes, what friends they sat with at lunch.

“It was so great, mom,” my little guy reported. “All the teachers knew who I was.”

And you could tell he loved that. Loved knowing that, because of his three older siblings, there was brand recognition.

And so he’ll follow in their footsteps for a while, and it will be fun to see what stays the same and how much of it will change.

And maybe five years, 10 years from now, I’ll look back on these years and remember them as easy and wish I could return to this very moment. And I’ll remember that we were happy, too. Because in the end, who’s to say we weren’t?