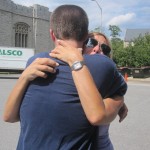 In my line of work, I have had to learn to develop a thick skin to withstand some of the verbal arrows that have been slung my way over the years.

And let me be more specific: when I use the term “line of work,” I am not referring to my role as journalist or ex-wife, but as the mother of three teenagers who I suspect might sharpen their tongues late at night to inflict cutting words and barbs to the unsuspecting.

Recently, I dragged my 19-year old son to a family counseling session to help us sort out some of the snags we hit when he returned home from college for winter break and was dismayed to find he was still expected to comply with the rules of our house. I needed a neutral party to bear witness and keep me from throttling him.

The therapist got him to admit that he respected me and all I do for our family and then gently coaxed him to share whatever else he might feel for me.

“Well, I don’t hate her,” he shrugged, and then went on to repeat that high praise at least once more during the session.

This is why I suffered through six months of breastfeeding and endured two rounds of thrush? Not to be hated? This is why I cut hundreds of hot dogs into tiny pieces to avoid choking and plodded through countless readings of Courduroy and sat shivering on park benches so he could fill his lungs with fresh winter air? To be placed on the cusp between somewhat likeable and barely tolerable?

But I’ve gotten used to the careless words children sometimes throw my way. In these parts, I have been crowned not only “meanest” but “worst” mother over the years. I also “don’t get it” and “don’t understand,” as if I arrived in the world cranky and in my mid-40s and this hasn’t been a work in progress.

Sometimes I think the girls can be the worst. I have been met with withering stares and told an outfit looked “crazy” as if I’d fallen into an episode of Project Runway, and an attempt to get in on ogling Zac Efron’s hotness with them was greeted with shrieks of horror as I was quickly reprimanded for being “gross.”

My son headed back to school at the end of last week and came up to my bedroom to say good-bye and as soon as I saw him, I could tell by the look on his face he had had a change of heart.

We hugged for a while and as I heard him sniffling, was reminded that despite his hard, outer shell, the kid is super gooey inside.

Now he’s back at school and we’re practically in love as I tend to his needs — printer ink, textbooks — with a click of my mouse. He’s grateful for my help and I’m just happy to go to bed at night and not have to worry about whether he’s home or why the phone is ringing. And by the time he returns in May I’ll have had ample opportunity to toughen my skin, and my heart, for the long summer ahead.

This essay was originally posted on Patch.com on January 18, 2012.