As the girliest of girls, I am an advocate of activities like shopping, spa days and seeing big Broadway musicals. And as the mother of two, now-teenage, daughters, I have enjoyed looping them into my girly fun.

Over the years, we have done the requisite mall excursions, mani/pedi outings and weekend getaways to Vermont with more girls to check out foliage and farm markets and browse the local book store.

And my two boys were having none of it.

“You know mom, that’s just not fair that the girls always get to do special things,” my 10 year old son told me not long ago.

His brother, older by a decade (and who never seems in such a hurry to really do anything with me), chimed in, “It’s true, mom. You never take us anywhere.”

They needed a dude day.

So I decided that I would get tickets for the three of us to go see a Knicks game and give them to the boys for Christmas. It seemed like a simple win-win: the older guy is a huge NBA fan and the little one just likes sports.

But, maybe because I need to make a big production out of everything or have to know every detail before I make a decision, I had a hard time pulling the trigger and clicking the “Buy” button as I searched for them online.

First of all, do you know how much tickets to a professional basketball game cost? You have to buy them through Stub Hub because all of the scalpers have already scooped up every ticket for every game at Madison Square Garden and would like you to pay double the face value. Thieves.

So now that it’s turning into more of an investment, I needed to make sure we’re going to the perfect game and have the best seats. The Bulls or the Celtics? All the way up top in the center, or down a little lower behind the net?

Who knew being a dude was so much work?

Eventually, I sealed the deal, printed out our tickets and wrapped them up for Christmas and when the boys opened their boxes that morning, I could tell they were duly impressed.

I navigated us into the city on a rainy Friday night and took them to a midtown pub for a dinner of chicken wings and a pizza loaded with three different types of meat. Man fare. I ate a salad and drank chardonnay.

We joined the throng entering the Garden off Seventh Avenue and I navigated the boys off to the right where fans were lined up three-deep in front of a glass counter filled with Knicks merchandise and hawking all the premiere names.

Growing up, my kids knew not to ask. Whether we were in a supermarket or at Disney World, they just knew that I wasn’t going to buy them that pack of gum at the checkout or the water bottle with the misting fan atop, so there was no use asking.

“Do you want one?” I asked the youngest as he eyed the row of blue and white jerseys hanging in front of him.

He stepped closer to his brother and said in a half-whisper, “Did you hear that? She said we could get one.”

My oldest son is too-cool-for-school. He rocked the skinny jeans and the Bieber hairdo long before the looks were de rigeur for the middle school set. But when the vendor handed him his white Carmelo Anthony jersey, he slipped it right on over what he was wearing and readjusted his Knicks baseball cap — flipped backwards — just right on his head.

Standing behind the two of them as we took the five escalators required to get to our seats high up in the arena, I knew that however much I paid for those crazy expensive basketball jerseys, it was like that VISA commercial.

Tickets to Knicks game: lots of dollars. Parking for train into city: too much. Pizza and burgers: more than you’d ever pay at home. Knicks jerseys: I’d never want you to know.

Spending the night sitting in between your two sons and cheering for your team while they explain everything about the sport of basketball to you for two hours: Priceless. 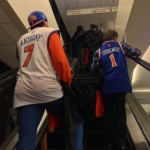