A couple of years ago I went away for a long weekend to Miami’s South Beach with an old college friend while my kids went away with their dad for Spring Break.

She’s the same friend who, if you recall, suggested on a recent girls’ weekend that my dark, red lipstick was not doing me any favors, and smudged it off of my lips with her thumb. She also observed during another ladycation with our sorority sisters in Hilton Head that I if I wanted to be successful with the fellas, I really needed to work on my small talk. Apparently, it’s not great.

And while some people might be offended by these personal observations, I know that she just has my best interest at heart and was offering the advice with love. She’s a Greek and after spending a week with her people last summer, I understand her so much better. I now know from where her very strong opinions and forceful nature stem. It’s the same cultural impulse that compels a taxi driver to shout out the window at everyone he passes and the frustrated woman behind the hotel desk in Samos — who was trying to help me connect my iPhone to their wireless — to bark, “Give to me,” and pluck the phone from my hands.

They are inherently a bossy people.

So, from time to time during our trip to Miami, where we stayed in a swanky little boutique hotel and sunned ourselves on the beach alongside topless South American beauties, my pal would lean over to me and say, “S-S.”

That was her code for “stop staring.”

Apparently, it’s something I do quite a lot. And now that it’s been brought to my attention, I catch myself staring at people from time to time, like one of my kids sitting on the couch reading or when I see that really beautiful woman in town who I think looks exactly like Elle MacPherson.

I guess I just get caught up in all the admiring and forget that I am not invisible and it could be perceived as creepy (it freaks my kids out at any rate; I don’t know if the lady in town has noticed me yet).

This past weekend I found myself wishing that the same Greek girlfriend was around to help keep my staring in check.

I went away with a couple of friends from town to Vermont to stay in one of the girls’ condo for a weekend of winter fun at her members-only ski resort.

We snowmobiled through the snowy woods along a winding trail — at one point passing a herd (flock?) of turkeys standing in a clearing along the side — and raced across a hilly golf course, opening our throttles as our hands gripped the heated handles. We skied the wide-open and empty trails on snow groomed to resemble corduroy, skiing right back onto the chair lift and up the mountain. And on Sunday we strapped on our snowshoes and marched around the well-marked cross-country ski and snowshoe trails in the woods alongside the condo.

We were quite adventurous. 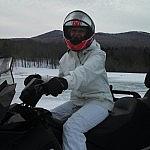 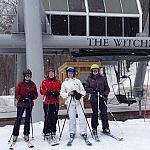 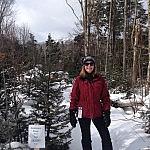 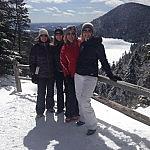 And when we weren’t outside playing in the snow, we spent quite a bit of time in the old country inn at the base of the mountain that serves as an uber quaint and fancy ski lodge while a much larger facility is being built for members nearby.

It’s like the setting for a snowy Nancy Meyers movie and is where all the staring comes in.

So, I am not living hand-to-mouth here in a fairly affluent part of central New Jersey where many of my 11-year-old’s friends own iPhones, there are a lot of Louis Vuitton bags standing on line at the gourmet deli counter and Audi SUVs waiting out in the parking lot.

There are pockets of great wealth, where the Wall Street crowd lives in fabulous homes with pools and docks along the river, and then, well, there are the rest of us living landlocked in Cape Cods and split-levels. I am kind of exaggerating but you get the picture: there’s a little bit of everything.

The crowd gathered at this particular Vermont inn last weekend definitely fell into the former category — there seemed to be a lot of hedge fund managers — but it was just in such high concentration, I couldn’t take my eyes off it. I stared at the Patagonia and Prada (!) ski jackets, the well-heeled ladies scattered around the dining room at dinner enjoying miso glazed Brussels sprouts and seared scallops in a beet puree and the woman sitting alongside us at the bar with the fabulous blow out (my friends couldn’t stop talking about her hair).

My one always-elegant friend leaned over as we stood enjoying our glasses of cabernet at the wine-and-cheese gathering for members Saturday night among the casually clad après ski crowd swathed in all their cashmere, and whispered, “It’s very Connecticut.”

None of this however, prepared me for all the staring I would try not to do on Sunday when we were whisked up to the top of the mountain in a heated Snowcat (nicknamed the CATillac) with CNN’s Chris Cuomo, who was with his wife and two young children. And us.

Two things: First, Chris Cuomo is a pretty handsome dude in real life but the one I couldn’t stop staring at was the wife. Even after pulling off her helmet and one of those Balaclavas from a morning of skiing, she was absolutely beautiful – very dark and exotic, which some Googling later uncovered might be due to her Brazilian roots. The second important thing about this encounter was that the Cuomos were not remotely interested in our lady gang from Jersey. We really did not interact with them at all, even though we sat around a communal table in a charmingly rustic cabin at the top of the mountain and ate lunch together (where the spread included bagels and lox and vegetable-hummus wraps).

“Did you see her eyes glaze over when she heard we were from New Jersey?” laughed one of my ladies later after the Cuomos skied off with their kids and we took the Snowcat back down the mountain ourselves.

We had a lot of time for research during out four-hour drive back home and learned that they lived in Manhattan and Mrs. Cuomo worked full-time as magazine editor, has been called “”one of the most fabulous mommies in New York” and is BFFs with Tory Burch.  And she graduated from Cornell. Oh, and we think she was wearing a Prada ski outfit. Oh, oh and their South Hampton home had been featured in a spread in Elle Decor.

I was in a weird piecemeal snow outfit pulled out of our winter bins that hold my daughters’ old ski wear and the pants were so tight I could barely breathe.

We did have a brief conversation with Mrs. Cuomo, and I shouted to her at the other end of the long wooden table about how the four of us had been planning a winter getaway for months and had originally thought we’d go much farther north, to Jay Peak to stay at a friend’s bed and breakfast. When that didn’t pan out, I told her, our girlfriend offered her place and mentioned there was a nice mountain where we could ski. Totally downplaying the greatness.

Then we started “oohing” and “ahhing” over how fabulous we all thought it was and in retrospect, the Cuomos were probably a little more used to that kind of lifestyle. They probably didn’t think twice about people just handing them vegetable hummus wraps and Chardonnay and icy cold water tapped from some nearby private water source. And it was all gratis.

But the four of us did. We discussed in detail all of the lovely little things we had noticed over the course of our fancy weekend and thanked our generous and insanely low-key girlfriend for sharing her getaway with us.

“I feel like a celebrity,” joked one of our gang as we packed the car to return home. “My kids are going to ask me for my autograph.”

And while I wasn’t hoping my kids would ask for my autograph, I was so excited about my weekend that I was hoping they would be somewhat interested in hearing my stories and looking at the pictures on my iPhone.

“Why do you keep bragging about it?” asked my fifth grader when I tried to show him a picture of the Snowcat, and that’s when I realized that they couldn’t just be happy for me. They felt jealous and left out.

So, I guess that’s why I’m telling you. Please don’t feel jealous, I would have taken you, too, but there’s only so much room in a Snowcat. 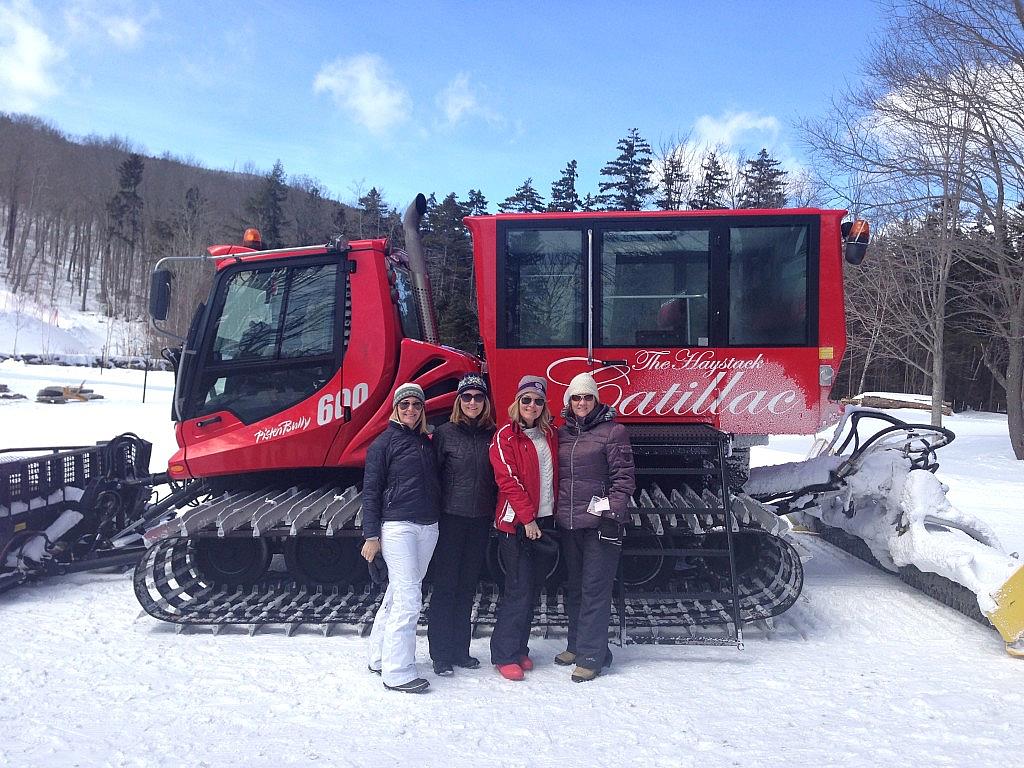 9 thoughts on “Suburban Women in Crisis”