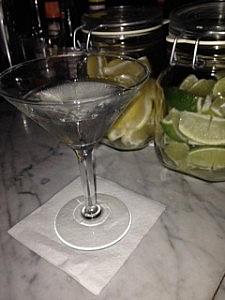 Between us, we have 19 kids, 9 weddings, 3 ex-husbands, 2 boyfriends, over 25 years of memories and a lot of opinions.

Since we met as students at the University of Delaware in the mid-80s, our gang of 8 friends has come a long way from our days of sitting around dorm rooms and sorority dens in oversized Forenza sweaters and big Jersey hairdos, telling each other what to do.

We’ve seen boyfriends – and those bad hairstyles – come and go. We’ve danced at weddings, celebrated the births of all those babies and when the towers came crashing down in 2001 and took one of the husbands with them, the group swooped in to support our friend bowing under the pressure of all that grief.

We’re scattered now up and down the East Coast – with one West Coast outlier – and don’t keep in touch like we should.  We don’t send cards for birthdays, reply-all to group emails and only a couple of us are active on Facebook (which is confusing to those of us who can’t imagine a day without it).

Without the Internet grapevine, we still know the big stuff – like who’s getting a divorce or moving to a new state – but the little things – like where the kids are headed for college or news on a parent’s hip replacement – gets lost in the shuffle of daily carpools and holidays.

So when we do get together every few years, catching up is our number one priority. We are expert interrogators.

We gather around dining tables and lounge around sofas gleaning as much information as we can about kids, jobs, husbands, parents, siblings and every facet of each other’s lives while slipping back into the easy friendships that began in college.

There’s always a carbohydrate involved and we laugh a lot.

But it’s a challenging crowd. They put the “Boss” in Bossypants. In fact, there are so many chiefs in the group, I just get in the back seat and try to keep my mouth shut like a good little Indian.

And I can be a bit of a loudmouth in my regular life.

But in much the same way that we revert to old behaviors when we get together with our families, when my college girlfriends and I gather, we assume the roles that originated almost 30 years ago. 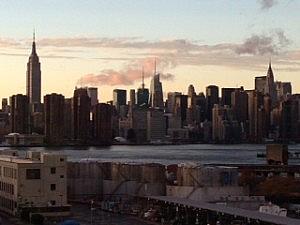 View from me and the Jet Setter’s room at the swanky Wythe Hotel in Williamsburg, Brooklyn.

We convened this weekend on the east end of Long Island – after a quick night of eating and drinking in Williamsburg, Brooklyn (ground zero for hispsterdom) – and by the time we drove the few hours out to the beach on Friday, we had fallen back into familiar patterns.

There was the Spy, the Smart One and the Jet Setter. Bossypants, the Nice One and the GDI (Godddamn Independent). The Senator was declaring her allegiance to Chris Christie’s presidential campaign by nightfall and I am supposedly the Funny One, but I think I am way more amusing on the page than in real life.

During previous gatherings, I had discovered that I tend to lose sight of 30 years of personal growth and become thin-skinned around the group. This year, I didn’t want our gathering to be clouded by hurt feelings and all my, like, stuff.

So I went back and skimmed my copy of “The Four Agreements.” I reminded myself not to take everything so personally or to make assumptions. (They happen to be two of my favorite internal hot buttons.)

My resolve was quickly put to the test Thursday night when we were freshening up in the hotel room before dinner when the Boss – who has been in the fragrance and cosmetics industry for 25 years – cut me off in mid-sentence to question my lipstick choice.

“I don’t like it,” she said, rubbing the dark stain from my lower lip with her thumb.

Five years ago, I would have been crushed. I would have taken her words as a personal affront. She was the same person who, when I made a comment about the group of girls sitting around her dorm room bleaching their mustaches with Jolen, came close, stared at my upper lip, and said, “Not for nothing but you might want to think about it.”

But as I listened to her explain that at our age, we should veer away from deep stains and formulas that sank into the crevices that have formed in our aging lips and opt instead for more neutral tones that used more of an emollient to literally gloss over our old mouths.

She was helping a sister out.

And that was that.  I didn’t dwell. I thought it was funny and moved on.

We spent the rest of the weekend eating great food, drinking lots of wine and discussing our sluggish digestive systems at length. We also got some very detailed information about somebody’s bikini waxing preferences — using raingutters as a metaphor and ensuring I would never look at the outside of my house the same way again.

We walked along the soft sandy beach in Amagansett and shopped in tony East Hampton stores where I found the perfect pair of short black boots, only to discover that they cost over $900.

Sunday came much too quickly and soon, we were all heading home via planes, trains and automobiles knowing that we would gather again next September and get serious about planning our oft-discussed 50th celebration.

The emails started that night, everyone chiming in to say what a great weekend it was.

“I adore all of you and love having you in my life even if it’s just once a year,” wrote one pal.

“It was so nice to see everyone and you haven’t changed much, funny thing,” chimed in another. “It’s so easy to be with all of you and to just continue on where we left off.”

The way good girlfriends do. Who could feel bad about that? 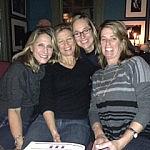 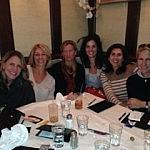 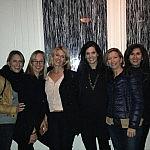