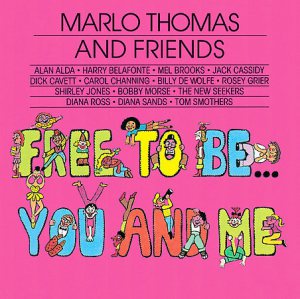 When I became a mom about a hundred years ago, there were a lot of things that came as a surprise, like how much babies cried, how challenging it could be to breastfeed and the power and force of a tiny colon.  Who knew poop could fly like that out of something so small?

But there were also a lot of things that I knew for sure: like, that my kids would love to read, never watch television and listen to everything that I said.

And if you’re an ‘A’ My Name is Amy reader, or one of my children, you know how that all worked out.

I also was determined to bring  a very “Free to be You and Me” approach to my parenting. You know, like we are all equals, be who you are, accept others’ differences, kumbaya.

I even had the Free to Be CD playing on heavy rotation in our minivan, along with our Shel Silverstein and Roald Dahl collections and the soundtracks from Oklahoma! and The Music Man.

That turned out to be a tall order.

Despite my best efforts, we have conformed to traditional gender stereotypes around here – the boys take out the trash, the girls help clear the table – with narrow views (Boston University was deemed “weird” when my son saw a girl with purple hair on her way to class).

But how could I have really thought I would get different results when I wasn’t really being “me”? I spent much of my life trying to compress that girl. To get her to stop being so bossy, so loud, so weird. To stop arguing with everybody’s husbands about their bad politics (a blow job is worse than a baseless war?) and penchant for go-go bars (seriously?).

I wish I could have stayed the same girl I was when Free to Be first aired on television, which happened 40 years ago this week. In 1974, sitting in the small yellow room that served as our TV room and watching that program, I knew that it was alright to cry, that boys could be afraid of mice and that ladies shouldn’t always go first.

I also believed that I could do anything. I used to sit in my room and practice being on the Merv Griffin show – yukking it up with ZsaZsa Gabor – so I’d be prepared when greatness came my way.

But I drifted far away from that 8-year-old girl over the following 20 years. I became less sure of myself. More uncertain about the way the world works.

It took a lot of work to turn that around but now I do feel free to be me and I hope my kids are taking notes. I still think that all of the Free to Be ideas and values remain relevant as well as challenging today as they were 40 years ago.

And maybe you can absorb them all when you’re a kid or maybe you need to live life a little to figure out who you really are.