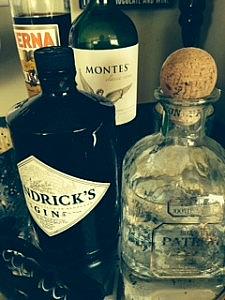 Here’s a conversation I had with my 11-year-old son yesterday morning:

Fade in: Early morning in my kitchen. The high school kid has already left for the day and my fifth grader is sitting at the island busily sawing through his syrupy waffle while watching the “Today Show.” Maria Shriver is onscreen, reporting in earnest that there’s a growing trend of mommies hitting the bottle a little too hard. The segment is called “Mother’s Little Helper.” She reports that in a Today.com survey, nearly 40 percent of moms said they drank to cope with the stress of raising children.

Son (looking up from waffle): Well, good thing you don’t have a drinking problem, Mom.

Me (relieved): Really? How would you know if I did?

Son (in earnest): First of all, you don’t beat me.

Me (suppressing hysterical laughter): Okay, that’s an interesting way to know I’m not drinking too much. Anything else?

Son (thinking): Yeah, and you don’t act like a total byatch to me.

Me (still trying not to laugh): Well, good buddy. I’m glad you don’t think my wine drinking is an issue.

Son (giving me a knowing look): I know you love your wine, Mom.

So, that’s pretty much what a person with a drinking problem looks like to an 11-year old. Or at least my 11-year-old. Beatings and acting like a bitch to children are the obvious, telltale signs of alcoholism for him.

But we all have those guidelines. You know, like, the signs we’ve seen on TV and in movies that would clearly pinpoint whether someone had drinking issues. Things like having a drink first thing in the morning, hiding bottles, losing a job due to alcohol or living on Skid Row and being a bum. Stuff like that.

The truth is, people with drinking problems look like any one of us (as Shriver’s piece illustrates by featuring a normal-looking mom, just like us, who came to terms with her own alcoholism). And while “Today” tried to make the issue seem new with the slant that more mommies are having wine during Friday playdates (like that’s some new phenomenon), I think the problem is far more quiet and pervasive. I think a lot of moms are at home at the end of the day pouring themselves just one more glass of wine to take the edge off the drudgery of it all. Or the stress of it all. It just makes everything a little happier.

God knows it does for me. But I don’t think it’s anything new.

Drinking is a slippery slope. Sometimes things are in check — I can have one glass of a nice Chardonnay with my dinner — and other times I wake up with a headache thinking, “Maybe I didn’t really need that third glass.”

Because it’s one thing to have a glass of wine with dinner and it’s another when you can’t seem to find your “Off” button on a Monday night in January.

The Center for Disease Control says that one-in-five women ages 25-34 report frequent binge drinking or four or more drinks, according to the Today Show segment.

I don’t even want to know the statistics for old people like me with teenagers. Yikes.

One good deterrent to drinking for me was reading the novel The Good House last year. If you’re struggling with booze, I suggest you read it because the main character, Hildy Goode, and her drinking will scare the shit out of you. You will definitely rethink that third glass of wine. And the author, Ann Leary, not only seems super-cool and somebody I want to hang out with, she is also very open about her own struggles with alcohol.

Here’s the good news for me: My saving grace just may be my fat ass. Seriously. Because I’m finding that one of the things standing in the way of losing weight — in the face of a slowing metabolism and exciting hormone surges — is the calories I ingest from wine.

Perhaps my ego really will save the day after all.

So I’ve really not bought any wine in a while and am finding that I am finally, finally starting to shed a few pounds. I’ve decided I need to get down to my fighting weight before the full onslaught of menopause sets in because things are challenging enough in the perimenopausal stage. I mean if I need to lose weight five years from now, I guess I’ll be relegated to just looking at pictures of food and licking stamps.

The best advice my therapist ever gave me when I was going through my divorce a few years ago was not to numb myself to the process. “Get rid of all the crutches,” she said, encouraging me to step back from the nightly glasses of wine.

And I think we’d all be better off if we stopped trying to avoid the full impact of our lives. Trying to soften the blow of  children and spouses and jobs with a big glass of Pinot Grigio at the end of the day. When we meet the challenges head on, we grow. I know I did.

It’s just that sometimes I forget.

But maybe now the problem is that — in our hyper-connected, Skinnygirl,  Sex and the City kind of world — mommy drinking is a little more acceptable. It’s more out in the open. Cosmos for everyone. Another round, please.

But Carrie Bradshaw never had to worry about waking up the next day to pack lunches for school.

9 thoughts on “Are Mommies Drinking More?”