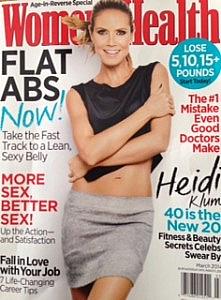 My 11-year-old son looked at me not long ago while we were sitting in our kitchen and said,”Mom, you should get flat abs.”

He had just been looking at the recent issue of Women’s Health sitting on the counter that I had picked up in theory for its recipes but in reality because of the picture of Heidi Klum on its cover and the FLAT ABS NOW! that screamed alongside her and her bared and toned tummy.

Lucky enough for my son, my hormone levels were fairly stable that day, thus allowing me to resist the urge to strangle him.

Instead, I lifted up my shirt and asked, “What? You don’t think my abs are flat?”

And sitting there on the stool, my belly did not necessarily look like Heidi’s but more like a Shar Pei, without all the fur.

And it’s true, my once fairly flat middle has been going through some changes as I climb through my 40s, despite another caption on the Women’s Health cover that declared “40 is the New 20.” Maybe hair coloring and Botox can help  mask the ravages of time but there’s no magic pill for a slowing metabolism and bloated belly (yeah, yeah, yeah, okay — maybe less chocolate and Tostitos — but they never used to be a problem before I turned 45).

Hormones are not helping.

I told my daughter on the drive to high school this morning not to be surprised when she came home to find she had a new baby brother or sister because I can’t think of any other explanation for the terrible cramps I’ve been experiencing other than I’m in labor. And I could use an epidural.

That never used to happen, either.

So, there’s the grim truth of it, and I tried to make that clear to my son that a lot more women out there look like his mother than Heidi Klum.

“This is what real women look like,” I told him, drawing a circle around my rippled middle with my index finger. “That lady’s picture probably was photoshopped to make her abs look even flatter,” I said, all know-it -all like. But I’ve seen Heidi’s picture wearing a bikini in People — another troublemaker magazine — and her abs look pretty amazing in real life, but I’m trying to keep expectations low for my kids.

This is not to say that I did not go on to make three of the four recipes from the article,”Your Flat-Belly Day” and read up on Heidi’s exercise regimen detailed in the magazine.

I may be going down but it won’t be without a fight.