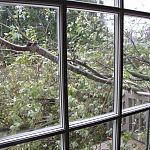 The PTSD kicked in earlier this month, when the weather around here started to cool down but not enough to warrant switching the heat on in the house.

On a few of those days, sitting in my chilly kitchen mid-morning working – before the afternoon sun warmed up the front of the house – I’d flash back to those few weeks last year when the sun was the only thing we had to rely on to heat the house.

Or brighten it, for that matter.

When Hurricane Sandy blew threw this part of the Jersey Shore one scary night a year ago tomorrow, she took a lot things with her like heat and electricity, and all those modern conveniences I had come to rely on like morning coffee, the Internet and hot showers.

She also took with her my sense that I didn’t need anyone. That I could handle anything thrown my way.

And while I fared so much better than many people in my small town – families whose homes were ravaged by floodwater that surged through their bedrooms and kitchens, destroying every last slipper, cookbook and photo album – the storm was still traumatizing.

For the second time since my old husband moved out of our house five years ago, I felt incredibly alone. It quickly became clear that no one would be checking in on how the kids and I were doing, no one would be offering us a place to stay and get warm.

It was every man for himself, so to speak.

We had a giant maple tree slice through our back yard as the storm really started to kick in that terrifying night. The tree, which had stood just on the other side of the chainlink fence in my neighbor’s yard, had been a source of irritation, dropping some piece of detrius or another into my yard – and the nearby pool in particular – for years. So it was fitting, really, that the one tree to come crashing down would be that annoying one, and while it missed the corner of my house by about one or two feet, it did manage to slash through the pool cover and crush everything in its path. 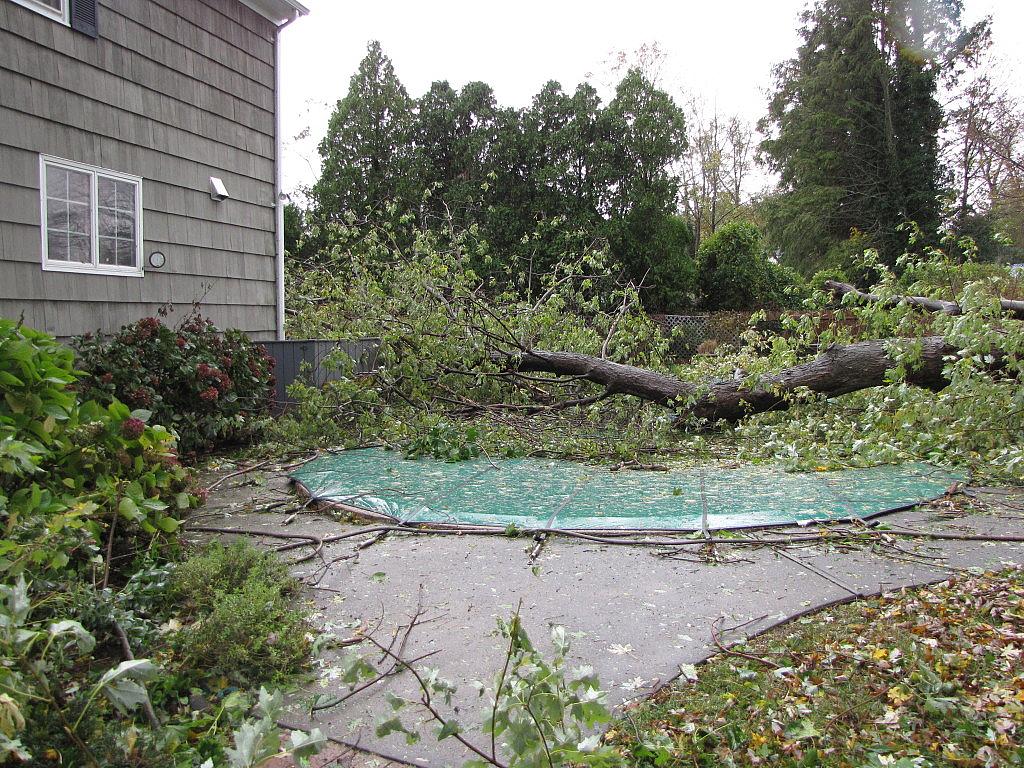 So on top of caring for the two children I had at home at the time and working 24/7 as a reporter covering the storm and its aftermath locally, I also had to contend with getting that thing out of my backyard and figuring out who was going to pay for it.

I’d be okay in the earlier parts of the day but when the sun would start to set in late afternoon, and shadows would fall in the bathrooms and kitchen, I’d freak out knowing it was only a matter of time that the kids and I would be left, sitting in the dark surrounded by our hodgepodge assortment of candles and flashlights.

And there is only so much Yahtzee one can play. 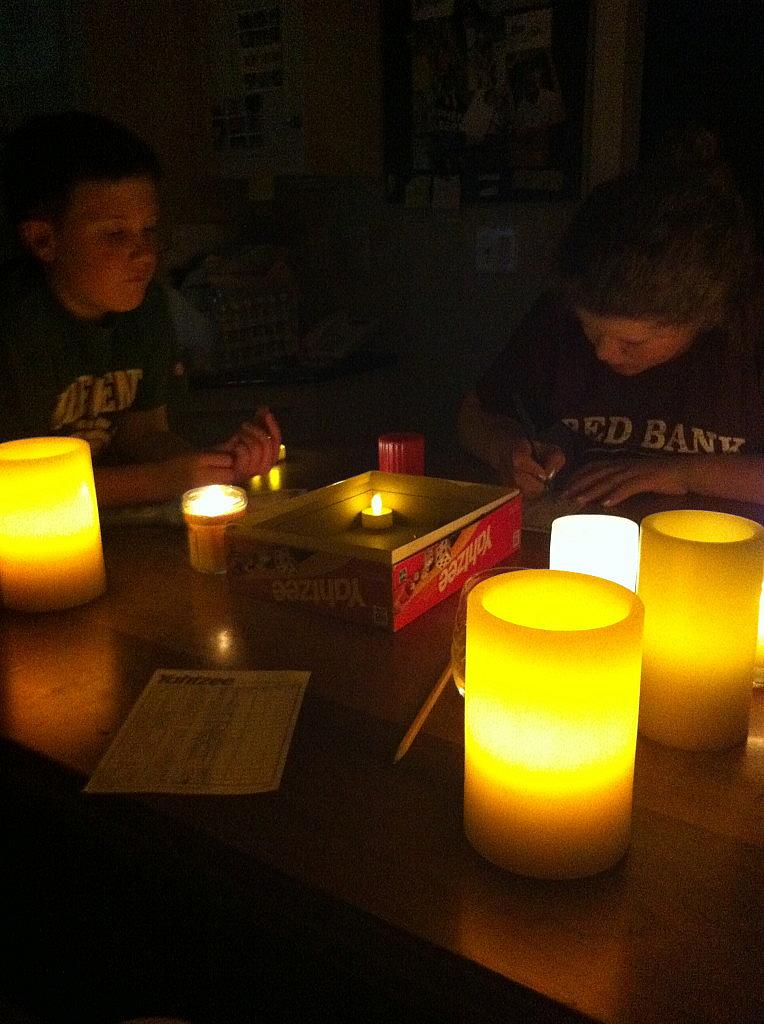 We’d trudge upstairs by 9 those nights and retire separately to our bedrooms, slipping under piles of blankets wearing layers of socks and sweatpants to keep warm.

We even had a generator, briefly. A friend in town had a truckload shipped up from somewhere down south to distribute gratis to those in need, but it was old and needed to be revved up to start like a lawn mower. It was the only time in my life I wished I had experience mowing a lawn so I would have understood the motion required to get that thing going – and how to operate the choke, for that matter. Instead, the two kids and I stood outside trying to get it to start and when our neighbor came over to lend a hand and got it started for us, its noise and fumes filled our garage even though it stood on the walkway outside. I wasn’t in the mood for CO2 poisoning on top of everything else.

While later, I would hear stories of how some neighborhoods banded together and made lemonade out of the situation, pooling resources and commiserating together over bottles of wine, it was pretty lonely over in my neck of the woods.

The only person who seemed pretty happy during those first few days was my then-9 year old who spent the time running relatively unchecked through the neighborhood with his friends, released from the bonds of school and homework. As the fourth child, he’s used to fending for himself – over the years he’s taught himself not only how to tie his own shoes buy how to ride a bike. He came inside one day to rest for a moment and I really got a good look at him, how he’d added a warmer layer to his go-to soccer ensemble and sported a knit cap on his head. As he sat on the couch pouring over some newly-discovered catalog, I noticed how his knees were covered with cuts, scrapes and dirt. 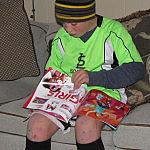 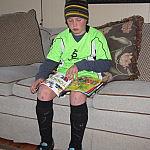 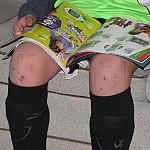 I understood then I was witnessing a Lord of the Flies transformation firsthand. It was only a matter of time before he’d be carrying around a conch shell and mounting a head on a stake.

So needless to say, when I heard that my mom got her heat and power back about six days into the ordeal, I immediately invited myself to stay there. I packed the kids off to their dad’s – who had also gotten his heat and power back – and relocated about a half hour south.

And from there, it got pretty good. Once I was under her roof, my mom took pretty good care of me, serving some type of hot cereal each morning and even halving my blueberries and setting it all out in pretty cups and bowls.  She was good company and once her cable was restored, we liked to sit and watch Nashville together.

I’d make the drive north each day to check out what was going on around town for work and make sure my cat hadn’t frozen into a block of ice. And when it seemed the kitty – who had survived near-starvation, some kind of burning that singed the whiskers off her face, and who know what else before we found her – had had enough, my favorite cat-lady friend came over and stuffed her in a carrier and I boarded her at the local vet.

And that’s my hurricane story. I stayed at my mom’s for about a week until my own power was restored and the kids and I could move back in. I’ve slowly had repairs made to my deck and replaced the gas grill smashed by the tree. But there’s still a portion of crushed fencing that needs to be replaced and I just haven’t had the extra time, money or energy to get that job done.

And I know firsthand how fortunate I am. That it’s just fencing and a pool cover that needed to be replaced. As a reporter, I’ve had the opportunity to witness just how devastating the aftermath of the storm could be. I’ve spoken with homeowners who weren’t just uprooted for a week or two, but remain, one year later, out of their homes. And I’ve seen what it’s like when some have stayed in their homes, that look as if they’re living in a war-torn Eastern European country and not a middle-class suburb of New Jersey. They have to deal with insurance companies and and flood maps and the government and that is truly traumatic. 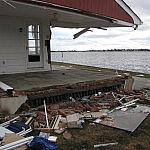 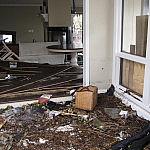 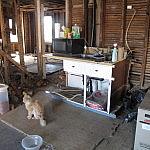 What I mostly learned about myself during those two weeks after Hurricane Sandy struck was that being alone is not always so great. That it would have been nice to have someone else help shoulder the burden the storm brought. Someone to help empty out the bags of thawed Lean Cuisine boxes, ice cream containers and chicken nuggets from the freezer. Someone to sit with by the fire each night and warm up next to under all those blankets at the end of each cold, dark day.

Because being independent is one thing but being alone, I learned, is something very different.