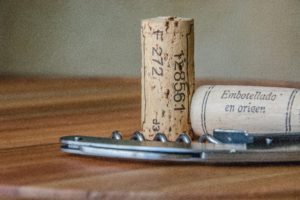 Last Friday night, my son’s high school football team won a nail biter of a game — with a touchdown in the last 10 seconds — and honestly, it was one of the most stressful nights of my life. It was one of those games that went back and forth, when at any moment either one of the teams appeared poised to win, and the first half alone seemed to last the equivalent of 1.5 games. We were all exhausted in the bleachers when it was over.

After we high-fived and celebrated the win in the stands, I started filing out with all the other parents and at least two said they were going to need a drink when they got home to settle their nerves after the crazy game.

“Ugh,” I said to one of the moms, “I picked a terrible week to give up booze.”

“Any reason for that?” she asked as we walked towards our cars in the parking lot. “Just too much fun this summer,” I told her, which was a roundabout way of saying that it felt like my alcohol boundaries needed to be tightened up after three months of drinking just about every day.

Raise your hand if you wrapped up the Labor Day weekend feeling like if someone accidentally pricked you with a pin, rose would come rushing out of the tiny hole. Or maybe pinot grigio, it that’s more your thing. Like you were a boozy hemophiliac unable to stop hemorrhaging vino.

I wrapped up the long holiday weekend, and unofficial end to summer, nursing a pounding headache after cocktails on the beach with my adult kids the day before, and decided to just stop drinking. That was 14 days ago. My goal is to stay dry for 21 days and then maybe, do it all over again. It feels good to wake up every morning and not hate myself.

The decision to take a break did not come out of the blue. I’d been thinking about pressing the pause button on drinking for a while. In fact, I do a lot of thinking about drinking in general. How much I had the night before. Whether I had any left in the house. How nice it would be if I could just have one drink with dinner. And most especially, how much I hated myself for drinking that last glass of (fill in the blank) the night before. It was taking up too much space in my brain and life is so much easier when it’s just eliminated from the stuff I really do need to think about every day.

I actually did take a break from booze two years ago. I turned 50 and decided to stop drinking for 100 days, and it was really hard. For one thing, August was a hard time of year to climb on the booze-free wagon. Not only did I have to get through two Bruce Springsteen concerts that summer and a tailgate for a Penn State football game in the fall, but Trump’s election in November required every ounce of willpower I could muster not to start guzzling wine right out of the bottle.

When I took that break from booze in the fall of 2016, I spent a lot of time thinking about my drinking — examining it from every angle — and reading books written by women who came to the conclusion that alcohol had become problematic (like, blacking out and waking up in bed in a stranger’s hotel room and almost killing your friends’ two kids). I wrote about it in my journal. I talked about it with my best friend and, of course, with Jennifer My Therapist. And according to the journal I kept around then, every day was hard. Each day I felt like I was being deprived of something I deserved, and often compensated with a bowl of ice cream or something chocolately from Trader Joe’s. It was not the thinnest time of my life.

I turned 50 on a Saturday and five days later, stopped drinking. Weirdly, I don’t even write about it in my journal that day. The following day I report in my journal that it was “not impossible,” and that waking up “sans remorse” was “lovely.” Then I go on to observe that after my trip later that day to drive my daughter back to college — an 8-hour ride round trip — I would probably feel like I “deserved” a glass of wine.

“I just need to get through the day,” I conclude.

And that’s how I kind of go about the entire 100 Day Experiment, which I must confess only lasted 90 days for me. I just pushed through each day and was relieved when my head hit the pillow each night that I’d made it through another day to mark off on my calendar.

My breaking point came when my 20yo daughter came home from college the weekend before Thanksgiving and she and her friend were having a glass of wine in the kitchen, and I was like, “Fuck it,” and poured one for myself and effectively fell with a thud off the wagon.

“I just couldn’t take in any more,” I’d write the next day in my journal. Then I pretty much resumed drinking most days and slipping into the same old patterns of indulging and then regretting my decisions.

I read something recently in a newsletter I love, about why it’s so hard to put “Future You” in front of “Present You,” which is pretty much the story of my life. I am constantly acting against my own best self-interest. I am so good and thoughtful to “Present Amy” — I give her pretty much anything she wants — whereas “Future Amy” goes through life cursing the all the stuff Present Amy did and did not do. Future Amy spends a lot of time scrambling to make up for the other one’s lack of foresight.

For example: Present Amy NEEDS that last glass of red wine when she gets home from a night of drinking many other glasses of red wine, and then Future Amy must suffer through a day pretending she’s fine while her brain feels like it’s melting and about the slip out her left ear. Also, nothing really productive happens after that mandatory nightcap. It’s one unproductive day that blends into years of other unproductive days.

And that’s how we got to this new round of sobriety. I turned 52 in August and was finally tired of not getting anything done. Or what I really mean, is not living the life I want to be living. As in: if I got hit by a truck tomorrow, I’d be pretty mad about all the things I’d yet to do with my life. All the things that were going to happen “someday.” You turn 52 and start to see there’s only so many some days left.

Out of the blue, my bestie sent me the link to a 21-Day Challenge to give up alcohol and it was like all roads were pointing to sobriety. If not for health reasons, then at the very least, to start getting the work done (check out another podcast they do on “grey area” drinking).

So, um, now you know. I’m kind of in this weird place where I know booze can be the devil, but I can’t imagine a life without it. (This is where Jennifer the Therapist asks me if I’d feel the same way about a life without marshmallows.) I’m heading to Quebec with my dad and stepmother and daughter in October, and I really want to have cocktails while we’re away. In fact, I’m planning on it.

Because that is normal. Last night, it was lovely watching the Emmys with a bottle of water nearby and not a bottle of wine, which would have probably been the case had I still been doing my usual routine. And then this morning, I would have been filled with self loathing. And my sleep has been amazing. The best it’s been in ages. So good it’s hard to wake up in the morning, which is weird for me.

I also don’t have a lot of social engagements on my calendar, which seems to have helped. Two weekends ago, my 15yo went to his dad’s and the others were off doing their things, and I found myself blissfully alone and spent the weekend organizing my life and reading and writing. I told friends I felt so rejuvenated that it was as if I’d been away at a retreat.

We had our block party last Saturday night, and it was fun to see all the little kids zipping across the cordoned-off street and running through the yards as the sky grew dark, marked only by the glow-in-the-dark necklaces they’d draped themselves in, wrapped around little ankles and pushed down on tiny heads like colorful halos. They discovered the swing we have hanging from a tree by our driveway and the whole night, a procession of children stood or sat on the wooden seat, as friends and siblings pushed and spun them around.

Although most nights seem like the perfect night for a cocktail, the warm evening beckoned for some kind of icy drink, as did the prospect of standing awkwardly in the street with veritable strangers. I envied the beers I watched a few of my neighbors drink. Instead, I made a fancy lime seltzer with a splash of (diet) cranberry juice, and contented myself with meeting all the young families who have recently moved to our neighborhood and laughing when the sisters up the street rolled up to the block party in their pink Barbie Escalade. Talk about jealous.

Had I been drinking, I would have definitely found a partner (or two) to try to keep the fun going long after the little ones had been taken home and put to bed. I would have easily polished off the majority of a bottle of rose and the next day, would have felt pretty terrible driving my 15yo to lacrosse practice 40 minutes away. Instead, I helped clean up all the desserts and was in bed and reading by 10:00. On a Saturday.

But I’ll tell you what, there’s nothing better than waking up on a Sunday morning and — aside from all the usual 52yo aches and pains — feeling like a champ. Future Amy was happy, for once, with what Present Amy had chosen to do the night before. A first.

Do you find alcohol to be the same slippery slope that I’ve been trying to navigate? I have a feeling that I’m not alone. Feel free to share in the comments below.

11 thoughts on “Pressing ‘Pause’ on Drinking”