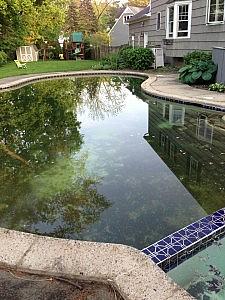 When I am dead, I would like the following engraved on my headstone: “She got what she wanted.”

And while you might think that that is a really awesome thing, getting what one wants, I’ve learned over the last 40-blah-blah years that actually getting what you want is not all it’s cracked up to be.

I read a quote recently about women never really wanting what they actually need — and that might be a giant blanket statement — but it seems to be one of the major themes of my life.

Witness the swimming pool in my backyard.

When we bought the house about a dozen years ago, it was everything I ever wanted: a traditional colonial in a nice neighborhood with four bedrooms and pool out back.

Who wouldn’t be happy in that set up?

But it turns out, having all the trappings of a happy life does not guarantee actual happiness. No, no it does not. That my friends has to come from within, which took me a couple of years and like, 800 hours of therapy, to figure out.

In the meantime, I still have this pain in the ass pool to deal with. For some reason, the monster has always been my problem. Over the years, I’ve had to figure out the complexities of vacuuming, maintaining chemical levels and scooping the inevitable bunny or mole that finds its way into the water but, alas, not its way out each summer.

And, because the pool was already about 20 years old when we moved in, there’s always something that needs to be replaced each season and it always costs $1,500. It’s weird.

There’s so much else that still needs to be done to keep it up, like fixing the concrete deck that’s steadily sinking near the deep end and replacing the robotic cleaner that meanders listlessly along the bottom of the pool like some drunken sailor, pushing the debris around with its tail. The money and energy required to keep the thing going can be overwhelming.

When I called a few weeks ago to schedule this year’s opening with my current pool service – and I’m convinced that they are all thieves — the woman on the other end was like, “Well, we’re pretty booked up so you won’t have it open for Memorial Day,” all condescending like she was simultaneously crushing my dreams and kind of happy about it.

She didn’t know whom she was dealing with. “Fine by me,” I told her happily. “Perfect, in fact.”

I was in no hurry to unleash the monster.

The best day of the year for me – well, aside from my birthday in August and the day after Christmas – is the day my pool is closed for the season. It’s just one less thing to clean and take care of. In fact, the pool is often the one thing that tends to slip through the cracks each summer. But unlike neglecting, say, a child, no one’s going to start making regular visits to make sure I’m taking care of my pool. No one’s going to arrest me if my pool walls turn green.

I finally had the pool opened last weekend and much to my surprise, it didn’t look half bad. Historically, the pool dudes pull aside the green cover and the water underneath seriously looks like it just got back from a stint at the Black Lagoon. You really expect to see some scaly dude with gills pulling himself up from its murky depths. But this year, the water was pretty clear although the bottom covered in some mysterious type of silt that just seems to absorb its way through the pool’s cover each winter.

That was on Saturday and as of this writing – some five days later – that crap is still clinging to the bottom of the pool. It’s hard to motivate to get out there and go through the whole rigmarole necessary to vacuum, but I don’t know how many more days I can stand the disappointment on my 11-year-old’s face when he bursts through the door from school asking if he could go for a swim.

I mean, what’s the point of having a pool?

I’ll admit, when it finally comes together, the pool has proven to be quite fun. The girls and I have spent hours over the years soaking in the steamy water of the spa at night, surrounded by candles and watching the bats swoop low over the pool’s dark water. And the kids have gone through hundreds of plastic bottle caps playing “dibble” (in which they pitch it into the pool and then have to find it) and seeing who can make it across the pool the fastest in one breath.

I know I sound like a brat — boo hoo me and my pool – but I’ve just figured out that more/bigger/better isn’t what makes for a happy life. Just a more complicated one.

In the future, I’m going to focus on nabbing the things I need instead of the stuff I want, or think I want. I mean, the idea is certainly not revolutionary — Mick Jagger figured it out about 100 years ago. But still. Some of us are just a little slower than others to figure out what’s really good for them.

Just ask the guy whom I work out with who was constantly baffled that a woman of fairly reasonable intelligence could not figure out that eating a box of Wheat Thins in bed each night was not the path to weight loss and good health.

I’ve finally cut all that extracurricular nibbling out of my diet — as he had been suggesting — and lost some weight recently and he was all, “It’s about time.”

Maybe it’s not too late to start making smarter choices — from what I eat to whom I love — in my life so I’ll be able to edit that tombstone to read: “She got what she needed.”

2 thoughts on “You Can’t Always Get What You Want”