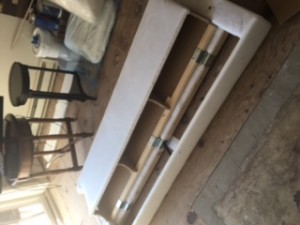 The Ektorp out of the box.

This winter, on top of pulling up stakes and moving from my old house and renovating my new one, I also learned how to speak a new language.

In fact, I’ve become quite fluent.

I know how to say “Liatorp” and “Malm.” I’ve mastered a few pronunciations of “Hemnes” but struggled a bit with “Beddinge.” But “Ektorp” was a breeze.

We ended up needing to buy a bunch of furniture when we moved into our new house because our old stuff was just too big. This 1929 Tudor has smaller rooms than our former 1969 Colonial and thus requires furniture with smaller profiles. It is neither sectional- nor footboard-friendly.

Enter the Swedes. They know how to streamline furniture. You just have to put it most of it together.

So I made an initial trip to the closest IKEA in January about 45 minutes up the NJ Turnpike on an exploratory mission. My girlfriend and I took a lot of pictures and notes of things we thought would work in the new place.

In March, my two younger kids and I returned and bought a bunch of things to stuff in a car and then we scheduled the really big stuff — like the Ektorp sofa — to be delivered a few days later. We bought the sofa, my 13yo son’s bedroom furniture (bed, dresser, desk), a futon for my older guy and a dresser for him to keep his clothes/hold the TV in the basement, and a really cool chair for my new office. We also got my little guy some really cool stainless steel shelves and giant wave picture to hang in his new room. And we ate meatballs and watched the planes takeoff and land at nearby Newark Airport because, like, when in IKEA.

I’d bought a bed from IKEA for my younger daughter for her 16th birthday a few years ago, which she put together herself over the course of three days, but hadn’t been back to the monolith since. But that daughter was home from school for spring break and chomping at the bit to assemble furniture. Can you imagine?

She barricaded herself in a room and slowly put together all of our new furniture. About a day into it she came to me crying that her hands hurt from all the screwing so I benevolently bought her a power screwdriver at Home Depot the next day. The only item she didn’t get to was my office chair, which required precisely 4 screws to be fastened, and took me about 2 days to complete. The guy who hung the subway tile in my kitchen watched as I struggled one afternoon and when he came back the next morning to grout, laughed, “You’re still fighting with that thing?”

Overall, I am thrilled with my IKEA purchases. I mean, I don’t need fancy. I like things that look good and are priced right (which is why I am obsessed with Target). And I know IKEA stuff can last because the table and chairs my first husband and I bought right after we were married for our apartment in Hoboken followed us with four children to three houses over about 15 years.

Apparently, you get into trouble with IKEA stuff  when you take one of their pieces apart — like a platform bed — and then try to put it back together again. Not a great idea.

But luckily, as I am never moving again, this will not be an issue. My Malm and my Ektorp will be standing long after I’m gone. But if they’re not, I’m going to need to find someone to put the new stuff together for me. 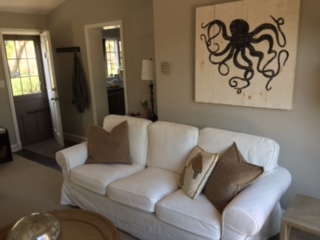 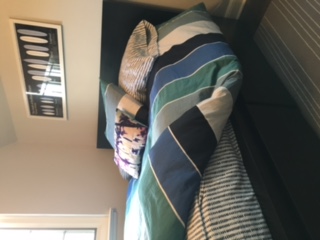 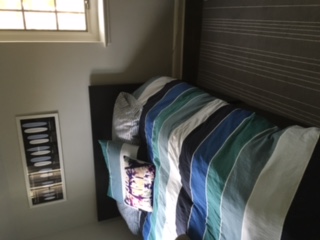 The rug is also IKEA. 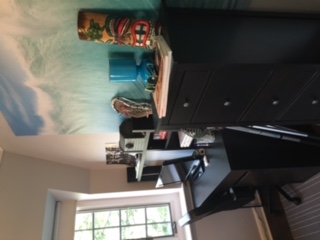 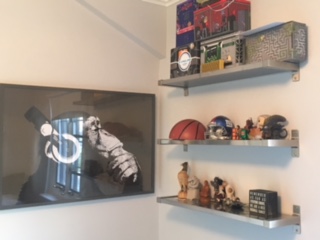 Ekby Mossby stainless steel shelves: I told him to go on Posters.com and find something that spoke to him. “That speaks to you?” I asked when he showed me the monkey and he shook his head in the affirmative. “Interesting,” I answered.

14 thoughts on “Would You Like to See My Ektorp?”