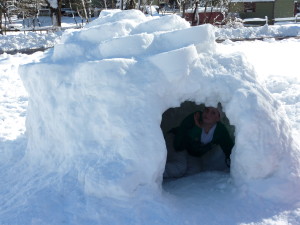 I was lying on a bed in a hotel room in the-middle-of-nowhere Virginia last week, waiting for my daughter to finish her final exam for the semester, when I posted the following on my Facebook wall: “Winter is coming.”

And I know that Memorial Day is here, and maybe I’ve been watching way too much Game of Thrones lately (hello, Khal Drogo), but I just couldn’t shake that imminent sense of doom.

Because like the good people of the House of Stark living in the north on the HBO series, I know that hard times are coming. On the show, they’re always ending conversations with the ominous, “Winter is coming,” tagline. Only now I totally get what it’s like to see the shadows quickly creeping towards you. I might start guzzling wine like Cersei before too long.

The summer months have always been challenging for me and now I fear the seasonal shift will be even more pronounced as I go from tending to the day-to-day needs of only two children back to the full load of four.

It’s like someone lifted a giant weight off my shoulders only to sneak it back on while I was folding laundry.

I don’t want to assume I’m doing what’s expected of me, just minding my own business while working on my laptop or turning ground turkey into one magical thing or another, only to turn around and get my head lopped off, Ned Stark-style, by some terrible enfant.

And so far, it hasn’t been terrible. My oldest son, at 20, seems to have come to terms with many of the conditions for living with his family and has been seen clearing dinner dishes and wiping counters and I’ve heard he might have even pet the cat once or twice. And his sister, who’s 19, has come in handy picking up and dropping off her younger siblings to work or baseball or sometimes she even drives me if I want to have a cocktail or two. I have also hired the older two to handle the cleaning of our pool,which  currently resembles the Black Lagoon, a task that has always fallen under my purview. It’s time to pass that time-consuming baton to those who actually have time.

Don’t get me wrong, though. Things aren’t like all rainbows and puppy dogs over here. I came down this morning to find a number of shoes lying around the family room floor and a pair of bunched up socks stuffed behind an ottoman. There’s generally a few bowls sitting in the sink, the remnants of a late night snack of ice cream or spaghetti and sauce caking the surface and much of our stainless steel sink, to greet me each morning.

And I hesitate to mention the big dent that recently appeared in the rear of our car.

It could be worse though, according to a girlfriend, whose two college kids brought home ants and mumps, respectively.

And I know it pissed the older kids off when I wrote about this before, and although they are the divas of the brood (NOTE: If you are reading this, my loves, don’t even pretend this isn’t true. It’s part of your charm.), it’s not really the specific people. It’s quantity over quality in this matter.

There have been some bright spots. I looked out the kitchen window one day earlier this week and saw the two older kids sitting in beach chairs in the backyard with their noses buried in books, and for some reason, I was not annoyed. If they were sprawled on the couch in the middle of the afternoon watching Vampire Diaries or Adventure Time, I think I would screamed the way I did when I found a certain someone still asleep at 12:30 yesterday afternoon.

But it was nice to see that all those nights of reading to them when they were young, learning for the thousandth time what happens when you give a moose a muffin or put a sister up for sale, weren’t for nothing.

So I’ll put up with the shoes scattered all over the mudroom and the daily “What’s for dinner?” because it’s a part of the package of being their mom. And aside from the fantasy of shipping all, maybe a few, okay just one of them off to the proverbial Wall, Nights Watch-style, what are my options?

Oh, the things I do for love.