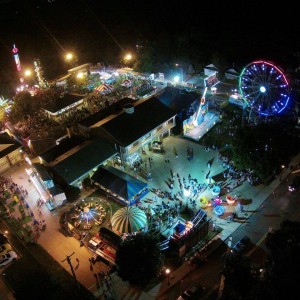 It happened around 7:35 p.m. on Wednesday, Aug. 26 this year. That’s the moment when my youngest child – a boy who still kisses me full on the lips and likes to sleep in my bed – looked at me in horror when I suggested we go on a ride together at the annual firemen’s fair in the next town.

“Hey,” I said to him as I handed over the $25 worth of tickets I had just stood in line to buy, “let’s go on the Rainbow together.”

The Rainbow is that platform with two rows of seats that swings out sideways, back and forth, and eventually starts going all the way around in one direction and then switches to the other direction — thus really mixing up whatever’s been sitting in your stomach since dinner.

“I’m not going on the Rainbow with you,” he snarled, recoiling from me as if I’d just suggested we clean toilets together.

“What are you talking about?” I said, looking down at his little face twisted in revulsion. “Everyone wants to go on the Rainbow with me.” 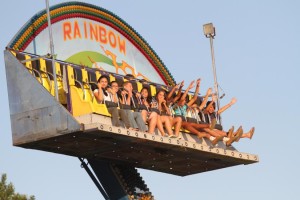 And it’s true. My daughters always loved going on rides with me when they were younger and we’d make our annual pilgrimage to the fair. They would happily sit next to me as the Rainbow would lift us up and over the fairgrounds or join me strapped in the death cage called the Zipper that spun us inside, outside and upside down while I shouted the “f” word at the top of my lungs. They got a kick out of seeing their mom convinced she was about to die.

I think I am one of the few grown ups who actually likes going on those rickety fair rides. I enjoy spinning around while worrying about the last time the ride had passed a safety inspection or whether the operator was addicted to prescription meds. It’s fun. And I really love doing it with my kids. Near death experiences are always excellent bonding opportunities.

So when my girlfriend and I decided to take our sons and a few other boys to the fair that night, I was looking forward to drinking a beer, eating an ice cream cone and going on at least one ride with my kid. Sounded like the perfect night.

My 11-year-old, however, had a different vision for how our evening would transpire, which mostly involved him roaming around the fair with his posse while I paid for the whole experience and then waited around to drive him home.

And that’s pretty much what happened. I handed him the ride tickets and forked over another $15 for games and ice cream, and he and his dudes disappeared for the night. They had to check in every half hour with the moms by the mini golf course but then they were free to roam around the fair.

But after one such check in, my girlfriend and her husband decided they were going to go on the Ferris wheel with their daughter and I A.) Didn’t want to be the third wheel in such a little car and B.) Am terrified of the Ferris wheel and try to avoid whenever possible. Then I overheard the little dudes say that they were headed to the Rainbow, and I was like, “Hold on, I’m coming.”

I mean, what else was I supposed to do?

We stood on the long line and slowly made our way towards the ride entrance and the boys pretty much ignored my presence. Our turn finally came to climb onto the ride’s platform and we handed over our tickets to the dude and my son led the way to the back row where we filed into our seats and he made sure to place his three friends in between the two of us.

But my son, the same child who just earlier that day was curled up next to me on a beach towel and would later come home and insist on sleeping in my bed, refused to budge. He wouldn’t even make eye contact with me.

So there I was, pretty much on the Rainbow by myself and only thankful that the sadness of the event was shielded from most bystanders by the row in front of me. And while I loved being lifted over and around and seeing the lights of the fair below, there is something kind of sad about a 48-year-old woman having that experience solo.

But I guess it’s just the natural order of things. Unless it’s drinking alcohol together (preferably booze that I’ve purchased), none of my kids really want to do things with me any more. They’d rather go off with their friends.

I just didn’t expect my little guy to shun me right there, at, like, 7:30 on a Wednesday night. I thought I’d have more time to prepare for that final rejection.

But I found consolation later in my ice cream cone. I don’t even like ice cream that much but I love the soft serve cones they serve at the fair, which swirl the chocolate and the vanilla together and then get dipped in a bucket of chocolate sprinkles to make a nice, crunchy outer layer.

I sat on a bench and licked the sprinkles dripping down the sides and noticed that I didn’t even know anyone at the fair any more. When my three older kids were younger, it seemed like I’d at least recognize most of the other parents pushing strollers through the dirt and chasing little ones toward the fun house. But now half my kids are in college and the other half is apparently too cool to be seen at the fair with me and I don’t know a soul. It seems after almost 20 years, we’ve aged out of the Rainbow and Zipper.

I popped the last of the cone into my mouth – the best bite in my estimation – and stood up to meet the boys and go home and wondered if there were any more trips to the fair in my future. Maybe next year I’d be relegated to just picking up and dropping off.

I’ll miss the plastic cups full of beer, commiserating with the other parents and of course — that meltingly-soft ice cream cone. But mostly, I’ll miss spinning high overhead under the lights of the fair pressed close to one of my children on a hot August night.

13 thoughts on “When Nothing is Fair at the Fair”