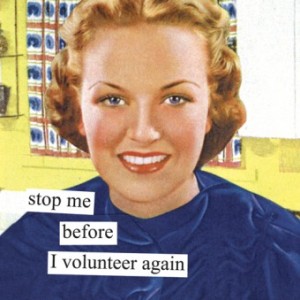 My little guy and I were talking about something the other night when he turned and asked, “Mom, why don’t you ever volunteer for anything for me?”

“What do you mean, dude?” I asked, knowing full well what he meant. I could smell where this conversation was going.

And, since there wasn’t really much more I could say to that very astute observation, I lowered my head and said, “Busted.”

Of course, what I wanted to point out to my littlest boy was the sheer scope and breadth of my volunteering history, beginning when his older siblings were very young. It was as their overactive mommy that I cut my teeth on the ins-and-outs of cupcake making and pumpkin picking while they were still in preschool. By the time my third kid went to nursery school I was helping to produce the monthly school newsletter.

Cupcakes, newsletters, pumpkin picking … those were just the gateway activities to the more heavy-duty volunteering I got mixed up in as the kids got older.

I moved on to some light pumpkin seed counting with the first grade and pouring juice for the various holiday parties. Later, I served countless years as the kids’ class mom and rode in school buses to chaperone field trips to museums and local productions of The Nutcracker. One year, I even helped hot glue ornaments signed by all of the children in the class onto a wire wreath as a Christmas gift to their teacher (I was just the trusty sidekick in that scenario).

I chaired school fundraisers, like luncheons and book fairs, and eventually worked my way up to serve as co-president of the Parent Teacher Organization the year I gave birth to my fourth child. That was also the year my left eye twitched uncontrollably for months.

As the kids got older, my volunteering extended to overnight activities. I spent a few days in the January of each of my three older children’s seventh grade year chaperoning a trip to a state park about an hour away where I went snowshoeing for the first time, learned survival skills and discovered, most importantly, that an American Girl sleeping bag was not intended to be used by a 40-something American girl.

I also went along to Washington, D.C. when my girls were in eighth grade respectively and learned how to herd wily teenagers around our nation’s capitol and watched teachers break up some harmless grinding going down in the back of our bus on the ride home.

Dudes, I was even a Girl Scout leader for, like, five or six years and am proud to say that I not only went camping on more than one occasion, but only lost one scout in all that time. I also misplaced one of my own children during a scouting activity but that’s a story for another day (or until I can send that child to receive the proper therapy he deserves as part of his recovery).

I even had a magnet on my refrigerator — back when I had a refrigerator I could stick magnets to — that read, “Stop me before I volunteer again.”

And to top it all off, I served on our school board for three years, which taught me that being an elected official was much scarier than just regular volunteering as your fellow parents are quick to turn on you when they feel you want to take away one of their fifth grade teachers or something. At least that was back in the day before Facebook groups became a Petri dish for parental outrage.

But then I had that fourth kid. And got divorced. And started working full-time. And instead of saying “yes” all the time, I started to say “no.” Instead of feeling compelled to sign my name up to do something when a sheet went around at a meeting, I’d resist the urge and sheepishly pass it along to my neighbor.

I just had too much on my plate.

Eventually, I stopped feeling guilty about not volunteering to, say, make a dinner or help starving children in Africa. I was no longer convinced that if I didn’t step up, things wouldn’t get done.

And that thinking was fine until it wasn’t.

Until the people around me were raising money to improve the technology at our high school or helping out weekly at our local soup kitchen or bringing books to at risk kids. I started to remember how good it felt to be a part of something. To help organize or raise money or just hot glue something for a cause that was important to me.

A lot has changed in five years. Things are hectic right now with all four kids living back at home for the summer. But when there are only two kids living under my roof who are capable of dressing and feeding themselves and one is old enough to drive, I’m not as overwhelmed as I used to be. I mean, I still forget shit all the time. But I’m starting to think that’s just me.

Probably right when I was having this major epiphany, an email arrived in my inbox trying to get folks to help out with the annual middle school art show and quickly, before I could over think it, I signed up to help.

And then I promptly forgot, that is until I got the reminder email this morning from the art teacher thanking me for volunteering and asking that I show up in the cafeteria around 10:30 to help take the artwork down off the walls.

“Shit,” I thought when I saw it and immediately started coming up with reasons why I couldn’t help.

A short time later, I was showered, dressed and engaged in very pleasant conversation while pulling pastel and watercolor masterpieces off the walls lining the school’s tiled hallways. The school was warm and buzzed with end-of-the-year energy as teachers moved up and down the halls during their breaks.

I ran into the music teacher who’d taught all of my kids how to play band instruments over the years while having a whole passel of her own children. I waved “hi” to the school nurse, who let one of my kids spend an inordinate amount of time on her cot when things were pretty rocky here at home. And I exchanged pleasantries with the older kids’ fifth grade and language arts teachers who both spent some time in our kitchen helping to ensure whatever the kids learned the year before didn’t slide out of their ears into the sand over the summer months.

And I was in the school for, like, an hour. Ninety minutes, tops.

But seeing all those familiar faces of all of the teachers my children have had over the years reminded me why I spent all that time pouring juice and selling raffle tickets. Sure, I needed a reason to get dressed and get out of the house back then but it also let me really get to know so many of those wonderful teachers and they, in turn, got to know my children. And in a way, it made me feel a part of the process.

As I was pulling masking tape off the wall, the bell rang and middle schoolers exploded out of their classrooms. They flooded the hallway and hopped over the piles of artwork we’d been setting on the ground. Some particularly sweaty gentlemen came in from their outdoors gym class and I noticed one happened to be my very own 12 year old.

“What are you doing here?” he asked when he saw me frantically waving to him in the hallway.

“Oh,” he said as he began to walk a little quicker past me. “That’s weird.”

And just like that, my baby learned to be careful for what he wished. He might have thought he wanted to have his mom hanging around his school doing stuff, but his older sister – who once watched in horror as her mother did the Macarena while chaperoning a dance – could have told him there was nothing more awkward than having your mom hovering around all the time. She is so not cool. She’s kinda weird even.

I’m thinking I should see if they need anyone to help out at field day. This could be really fun.