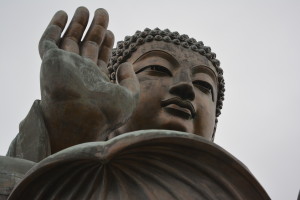 Every six weeks or so, a brown stripe appears down the center of my head, which I used to be cool with until those darkened roots became increasingly flecked with grey wires. Now, I scurry to my hair colorist so she can wave her magic wand and return my hair to its make-believe, uniform-blonde state.

I started fooling around with my hair color about 15 years ago to lighten up my mousy brown locks with some highlights but the greyer I got, the more highlights I needed and the blonder I became. So, what was once a beauty treatment I kind of dabbled in – there was never any great sense of urgency – has now become a critical part of my maintenance schedule. It’s right up there with my annual mammogram and getting my teeth cleaned.

But I often tell anyone who will listen that even if I didn’t like how my hair gal has transformed my head, I’d still show up in her chair on a regular basis for the conversation. She’s funny, smart and remembers as much as my therapist does from one session to the next and she’s not even taking notes. Plus, she’s a rock star. Last week she paired kind of Western booties with a long black tulle skirt and I’m telling you, few people could pull off that look. She also converted to Catholicism recently and is very active in her church community, so she’s a bit of an enigma to boot.

I brought her up to date on my life as she dipped a brush into a mound of goop she’d concocted in a plastic bowl to paint my roots and she asked me about my pending real estate transactions. I told her how nerve-wracking the whole process had become and fretted that I wasn’t going to get what I wanted.

“You just have to believe that God has something even better planned for you,” she finished. “You can’t have any attachments.”

And you know how sometimes you hear something or read something you’ve heard or read a thousand times before but then it arrives one more time and it’s like you receive it in a whole new way? Where before you were like, “Oh, yeah. Blah. Blah. Blah,” and then all of a sudden you’re like, “Whoa”? Like the heavens open and a chorus of angels begins to sing?

That’s what it was like for me, sitting in that chair with a head full of chemicals waiting for a timer to go off. It was like a light bulb went on over my head instead.

The older I’ve gotten the more I’ve come to realize that I spent much of my life trying to manipulate outcomes, often against fairly considerable odds. I had been very attached to how I wanted my life to look.

And it worked, for the most part. In fact, a former neighbor told me well after we’d been living across the street from each other for a while that when my family first moved in, she referred to my husband and me as Ken and Barbie.

In a way, that was just what I wanted.

And that was okay until it wasn’t. Until I realized that what I really wanted out of life was less plastic and more real. Like, old Velveteen Rabit-real.

So I started letting go of things I never thought I’d be able to live without.

And in a curious case of weird timing, last week brought with it three milestones to mark my journey towards letting go.

First of all, my baby turned 13 and while on the one hand it seemed to have happened in a flash, on the other hand – with two of his siblings in college and the oldest a recent graduate – it’s been a bit of an eternity. But there was no talking me out of having that fourth child and even though I’ve had kids in the school system for so long that I remember when you sent cupcakes in for birthdays and slathering peanut butter on everything seemed nutritious and not dangerous, I wouldn’t want a life without that kid. Who else would watch “The Pioneer Woman” with me during dinner or open the window for me when I’m having a hot flash? And he’s the perfect example of someone who’s benefitted from me letting go and not trying to filter everything he comes into contact with to create some perfect person. He just is who he is, which ended up being pretty great.

That same day, I sold the house we moved in to right before I gave birth to that fourth child. Another questionable decision you could not have talked me out of at the time. But that four-bedroom colonial in a neighborhood of similar homes represented the lady I wanted to be, no matter the cost – monetarily or otherwise. It was who I thought I was.

Apparently a lot has changed in real estate since I last bought a house 13 years ago because now you no longer need to attend the actual closing. I signed the papers in my kitchen the day before instead so I could go to my son’s basketball game, so it seemed a little surreal when I got the call from my attorney on my way home from the game to tell me the deal was done.

“Congratulations,” he said before we hung up and I could feel the door close on that chapter of my life.

I looked around to commiserate/celebrate with someone nearby but only saw my four children who were definitely not interested in hearing about how conflicted I was about the sale of our home. As far as they were concerned, the whole thing was bullshit.

Instead, I took the kids out for hibachi for the birthday celebration and had a quiet drink later with my pal across the street, who made some delicious old fashioneds to mark the occasion. She, probably more than anyone, knows what a journey selling the house had been.

And finally, last Tuesday would have been my 25th wedding anniversary and instead of celebrating on one of those big trips other couples I know go on to commemorate being able to stay together for so long – like a trip to Paris or the Amalfi Coast – I took a boat into New York City for dinner and drinks with high school friends, one of whom had the honor of wearing the crazy tulle and velvet costume I’d chosen for my bridesmaids all those years ago.

We asked each other a million questions and admired each other’s hair and although not all of us have remained close, there’s a certain comfort and ease being in the company of people who knew you when. Who know the real arc of your story.

That girl they knew in high school was a bit of an unanchored mess who had a lot to learn about life and love. What all of that should REALLY look like, which, it turns out, has nothing to do with the house you live in or – alas – your hair color.

My oldest daughter and I went for a walk at the end of the week and as we picked our way down a dirt path through the bare trees, I thought about all of those outcomes I’d been so attached to – marrying that guy and having four children and living in a big house. Ask anyone who knew me back then and they could confirm how overwrought I’d been trying to make all of those things to happen.

And I thought about how I didn’t want to get so worked up again about something so beyond my control. The word “attachment” kind of kept going through my brain as we hiked and I saw the late morning sun gleaming on the water through the trees. During the warmer months, that view is blocked by leaves and you forget that the river is right there, beyond the hills of the park. But there it is, all along. We stopped to admire the view for a bit and my daughter took out her phone to take some pictures because, that’s what you do when you’re 21 nowadays.

I started to tell her all about this revelation of mine, and she listened with her usual skepticism. I usually make good on about 10 percent of the things I talk about. I’m full of big ideas. So I told her all about my desire to just go with the flow and not get hooked on any outcome – I practically started singing “Que Sera, Sera” – and then I asked her if that wasn’t, like, the foundation of Buddhism.

“Congratulations,” my girl responded in a tone that seemed less-than-sincere.

And whether I can sustain this new outlook remains to be seen but I’m pretty sure I’m not going to start practicing Buddhism any time soon. I can, however, guarantee that the one outcome I refuse to disavow myself of is the color of my hair. I am permanently attached to being a blonde.