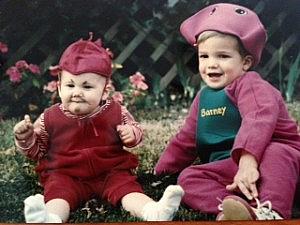 The Devil wears Hanna Andersson. And Barney is just a gift. Circa 1994.

I was agitated earlier this week when I got a text from my ex-husband announcing it was his year to spend Thanksgiving with our four children.

I had already committed to hosting the holiday at my house for my side of the family and was looking forward to the planning and execution of the dinner alongside my girls. We’ve had fun over the years peeling potatoes and baking turkey cakes side by side in our kitchen. I love how well we work together, how one of the girls slices the apples while another prepares the filling and then I sprinkle the sugary crumble on top.

But one of the things about divorce is that you wind up with a script of how things should go down henceforth. Somewhere in a drawer in my room there is a document that details who gets the kids when, in alternating odd and even years.

But in the five years since we’ve been apart, I haven’t really had to consult our divorce agreement for holiday issues. Things always just seem to work out around Easter and we pretty much stick to the Christmas script we always followed.

And Thanksgiving hadn’t been controversial because he’s been spending it with his girlfriend’s family. But apparently he wants to loop the kids into that this year.

At first I thought, “Well that sucks. Why would the kids want to go there?”

But after a couple of things that happened this week, I’ve decided it’s not really a big deal. It’s just one day. One meal.

I went to join my knitting group for a spell on Wednesday — and I use the term “knitting” very loosely because while we used to actually work with yarn and needles, now we mostly just really like each other and show up sans equipment to catch up over coffee for an hour or so.

We got to talking about Thanksgiving plans, as women of a certain age invariably do. Who’s hosting, who’s coming. How many.

My one friend, who’s about 10 or so years ahead of me in the mom game, announced that she and her husband were going to travel to Boston to spend the holiday with their son and his wife.

This is not the first time in recent years that they have traveled to spend a holiday with one of their three children. Last year they drove to the Hudson River Valley to eat Thanksgiving dinner at the restaurant where one of their sons works and this Christmas, they’re heading to Vermont with another son.

But it’s not what she expected, she said, all those years ago when the kids were small and they would gather with extended family in their home. It was their tradition.

“I always thought it would be that way,” she said to us gathered around the kitchen table littered with coffee cups and cell phones.

“But then, once you spend a holiday without all of your kids, you realize that you can get through it,” she said. “That it’s not the worst thing.”

And that really stuck with me.

When you get divorced, of course one of the things you focus on is the possibility that at some point, you might be spending a holiday without your children. You freak that all those traditions you carefully cultivated over the years won’t continue.

I’ve spent a few Easters without the kids and that was rough. I flew to California to spend the holiday with one sister and her family and remember just how sad I was to be without the kids that day. How sad it was to not be stuffing millions of jellybeans and pieces of chocolate into plastic eggs or finding the perfect hiding spot for a basket.

But the kids were off on some beach vacation with their dad and how could I begrudge them that? There should be some upside to having divorced parents and if that’s a trip to the Bahamas, so be it.

Yesterday was the first Halloween in my like 18-or-so years of trick-or-treating with kids that I didn’t have to actually hit the pavement. I was prepared to follow my 10 year old down the darkened streets of our little town while he and his posse ran from house to house filling their pillowcases with treats. But it never happened.

He had hooked up with kids in another neighborhood and by the time I got over there, the dads had been dispatched to oversee the kids while the moms were busy inside a nearby house setting out the fancy pigs in a blanket and Capri Sun pouches to distract the kids from candy upon their return.

I stood around the kitchen and drank a spicy blood orange margarita and chatted with the other moms until the kids started to trickle back in. They compared hauls and then ran around outside, playing manhunt in the soft October night air.

I finally pried my son away from the fun, gathering his yellow nylon costume off the pile of other discarded superhero suits on the floor, and on the drive home, he told me, “That was the best Halloween ever.” 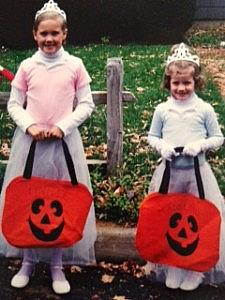 And I thought of all the Halloweens of years past, holding little hands walking up to neighbors’ doors and encouraging my little Buzz or Woody to say “Trick or treat” and thank you upon receipt of said treat. Of being part of the stroller brigade later, when the older kids could zip independently from door to door while we moms waited in the darkness by the curb with the younger siblings in tow.

And later still, when everyone wanted to walk around with their own set of friends, I’d be off in a million different directions, trying to keep tabs on who was with whom and where.

It’s evolving, this parenting thing. One minute you’re shouting at your little Tinkerbell to keep up with the group of trick or treaters and not run in the street and the next, she’s getting on a train to the city to see the Halloween parade and eat Indian food.

And whether you get to that point slowly over time or a divorce or other catastrophic life event helps accelerate the process, at some point, we all get there.

Traditions are broken or need to be changed. But that’s just how it goes.

I think the key is flexibility, and remembering what’s important. What really counts.

Because while those big holidays are great and go down in the photo albums and memory books for the ages, it’s the slow slog over all the days and weeks and years that really matters. Being there for the kids on a Tuesday afternoon in September when one is feeling the pain of a failed romance or a Friday morning in December when another thinks she can’t go on one more day.

That’s the tradition I hope I’ve created for my children that neither divorce nor growing older will ever break.

5 thoughts on “Traditions: Old and New”