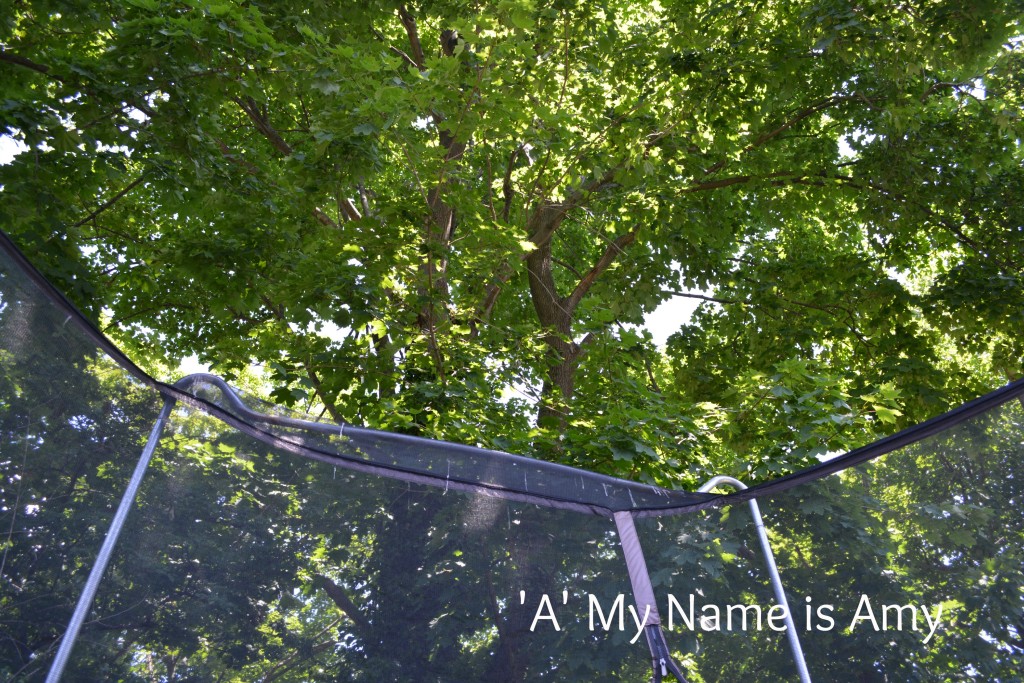 Yesterday I was sitting at my kitchen table looking at my laptop when my 12yo son came in from playing outside and I was reminded, not for the first time, of the miracle surrounding puberty.

He’d come home from school earlier without much to do. There were no games or practices to get ready for. The school year is winding down so he didn’t have any homework to keep him busy and he hadn’t made any plans with friends to hang out (I have been instructed to no longer use the words “play” or “play date” to describe these events).

But he’s generally pretty good at keeping himself occupied. He’s the kind of kid who can just go outside and kick a soccer ball into a net a million times. Like, he was definitely a giant golden retriever in a previous life who found great joy in endlessly fetching a ball. Over the holidays, when the ground was covered with snow for weeks on end thus preventing said ball kicking, my guy decided to use an indent in our sectional couch as his goal. He’d move the coffee table out of the way before school and just kick the soccer ball into the couch over and over and over again. KA-KUNK. KA-KUNK. The noise didn’t really bother me. I’d stand in the kitchen making a meal or wiping counters and watch him work on his scoring technique. But it drove his older three siblings nuts.

“NICK,” his older brother would scream from his basement lair, “CUT IT OUT.”

His sisters upstairs didn’t care for the repetitive thumping either. One of them stalked down the stairs and grabbed the ball out from under him and returned to her cell while the 12yo just stood and watched the ball disappear upstairs. Then he fished his lacrosse stick out of the mudroom and stood in the back hallway, tossing the rubber ball against the door leading out to the garage. KA-KUNK. KA-KUNK.

When our neighbors relocated to Hong Kong last summer, one of the many wonderful things we acquired temporarily was their trampoline and – for as much as I NEVER wanted a trampoline and have a video of my grown daughters jumping on it in our yard and yelling, “We have a fucking trampoline!” – the thing does keep bored people busy.

So my guy came home from school yesterday and foraged in the pantry to find something to eat other than the raw almonds and Trader Joe’s quinoa and black bean-infused tortilla chips the older children turned their noses up at as they raped and pillaged the pantry all day while the little brother was at school. After nibbling on a handful of turkey jerky – his sadly best option – he made his way outside to jump around.

I sit most days on a chair at the end of my big, pine kitchen table that backs into the curve of a bay window overlooking our backyard. The seat provides the perfect view of the trampoline that takes up the far end of our yard and I love sitting there and watching the kid’s moves.

He ran for a while around the perimeter, taking big, long strides inside the surrounding net and stopped occasionally to throw some punches, a few upper cuts for good measure. He’d hooked his iPhone up to our Spotify account and was pumped up listening to his 12yo jam, songs like “Bohemian Rhapsody” and Billy Joel’s “For the Longest Time” (these also happened to be songs he sang at his end-of-the-year chorus concert). I watched as he continued running in circles and eventually he plopped down on his back to rest, staring up at the leaves dangling from branches high above and singing along to Queen.

After a while I stopped stalking the child and resumed work and didn’t really notice when he appeared standing at my side some time later. At this point, he’d been jumping around for a while under the hot afternoon sun and his face was visibly moist, the ends of his shaggy hair soaked with sweat. But I was so preoccupied by what I was doing I didn’t really pay attention to his presence until my nose sounded the alarm.

“WHOA,” I said, turning to look at his sweet, shiny face. “You stink.”

I mean, it wasn’t like I’d never smelled anything like that before, and I’m not even talking about that homeless person I walked by in the Christopher Street subway station one hot July afternoon in 1990. No, I’ve had close encounters of the super-smelly kind with his older siblings when they were in the early stages of puberty. I could always sense a shift — before obvious things like deepening voices and growing breasts provided the visible evidence of change – by the way they smelled, which is best described as “ripe.” Overnight, I’d go from wanting to bury my face in the tops of their heads to inhale their sweetness to getting a whiff of their hair when they walked by and smelling what could only be described as “hair,” and not in a Gee-Your-Hair-Smells-Terrific kinda way.

My favorite “So You Think Your Kid Stinks?” story was the time I ended up in the ladies room during a middle school basketball game and my daughter and her teammates rushed in to use the facilities before the start of the second half. I remember sitting in the stall as they milled around the sinks thinking, “Holy crap, one of these girls totally stinks. What the hell?”

After the game, our family trundled through the cold school parking lot and piled back into our car and it wasn’t long after the doors had closed and the heater was switched on full blast that I made a horrible discovery: I had given birth to that smelly kid I’d encountered in the ladies room.

So I wasn’t shocked or anything by my little guy’s strong body odor after his trampoline workout. This is not my first puberty rodeo, you know. It was just a reminder of not only the power of hormones but also the effectiveness of Old Spice when used accordingly.

I told him to run upstairs and jump in the shower before he left to have dinner at his dad’s and reminded him, because it seems sometimes certain people need to be reminded, to avail himself of any and all soaps and shampoos lying around the shower stall. “Go nuts,” I instructed.

He took his sweaty self upstairs and I picked up my cell to text his father. “You’re welcome,” I wrote and added the emoji wearing the surgical mask, which is what I wished I’d been wearing a little earlier.

We joked via texts about our baby’s smelliness for a while but honestly, I hope the odor doesn’t go away any time soon. I hope our child still finds pleasure in marching around a trampoline by himself and lying on his back and staring off into space for weeks and months to come. That stinky smell is the warning sign. It indicates that the end of childhood is nigh. It breaks my heart not only because I’ve so enjoyed this child, my last, but also because he’s it. When he turns the corner and bids childhood “adieu,” I will no longer have a legit child of my own. No one will need me any more to hold their hand to cross a street or cut their steak or kiss their knees when they fall.

And, fuck, I used to complain about having to do all that shit for them but now, man, I’d like to go back and punch myself in the throat (to borrow a phrase) because here I am, 20 years later, missing the shit out of Easter eggs and Nickelodeon and having to shampoo little heads every night. I officially would like to eat all my stupid words.

So, keep on smelling my son, I say. I hope you stink all summer long and well into the next school year. Because as long as you do, I still get to be a mom to a kid. I’ll happily drive you and your little knucklehead buddies to the mall to watch “The Avengers” and put up with all of you running around my backyard later whipping sneakers at each other. Whatever it takes to keep you a kid. Before long you’ll be way more interested in finding out where all the cute girls in your grade are going on a Saturday night and walking around town with a backpack full of Keystone Lights.

Growing up can wait.

I will, however, continue to insist you use the deodorant I bought you last week because, dude, no one needs to smell that bad.

You can sign up to get all my latest posts sent right to your inbox lickety-split by typing your email into the “Never Miss a Post” box. You can also follow me on Facebook and Twitter because, hey, what else are we doing?