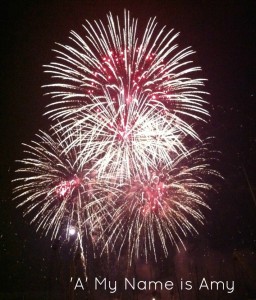 Celebrating a different kind of freedom.

I don’t really love the 4th of July. I feel like it’s the summer version of New Years Eve. There’s like some weird pressure to have come up with fabulous plans to celebrate our nation’s independence, when all I really want to do is power wash my pool deck and read a book.

There’s also a cloud that hangs over all the barbecues and fireworks for me, kind of the way the new movie “Inside Out” shows how happy core memories can be colored by sadness.

I found out my parents were getting a divorce on July 5, 1978, a month shy of my 12th birthday, and it marked the beginning of a long period of feeling like the rug had been pulled out from under me. It took a long time for me to find solid ground.

And then about 30 years later, this happened (originally posted here last year).

My ex-husband and I finally and completely called it quits on our marriage on July 4, 2009. Afterwards, even though he was the one who pushed me off the steep cliff of indecision, he sent me a text wishing me a “Happy Independence Day.” And while that was kind of snarky thing to write, it was also kind of true.

We had initially separated about seven months earlier and then agreed we would go to counseling together and try to find a way to make things work. But honestly, I don’t think I ever really thought that was going to happen. Neither of us ever got what we needed from the other.

I still miss the barbecues and fireworks we shared as a family and of course, those really nice biceps, but not how much it all cost me. I really want to be in a relationship – I know that now – but not at any price.

14 thoughts on “The Price of Freedom”