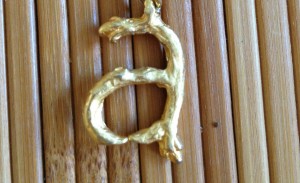 As I was getting ready to finalize my divorce, I opted to take advantage of the one-time opportunity to legally change my name the day the deed was done at no cost. After spending a grillion dollars to get out of the marriage, it seemed like an offer that at least needed to be considered.

But the decision did not come easy.

I kept polling my kids about how they would feel if my last name was different from theirs, and finally one of my daughters was like, “Just do it already.”

The tipping point came while I was serving on our school’s board of education. Board members’ names are called throughout the monthly meetings – Robert’s Rules-style – for voting. It’s always the formal names used too, no “Kevin” or “Kathleen,” but “Mr. Smith” or “Mrs. Jones.”

During one meeting a few months before my divorce was final, I just couldn’t answer to Mrs. X again. Here I was doing something that was mine, all mine, while answering to somebody else’s name. My wooden name plaque was updated following the divorce and I was proud to sit behind it for the rest of my term on the board.

An article in the Sunday New York Times Style section yesterday explored how some women not only revert to their maiden names following divorce, but go one step further by adopting invented surnames or forgoing the last name altogether.

While I could get behind being known as Amazing Amy or Mrs. Ryan Gosling, I kind of liked returning to my old name. It’s like I never really gave that old Amy a chance. I never really let that girl show me what she could do before I was busy shrugging her off to slip on a new name like it was a new pair of shoes.

When I got married at 24, I didn’t think twice about changing my name. I was in love and apparently didn’t think twice about a lot of things. I would suggest to my daughters when they are getting married to give it some thought. Not in case things didn’t work out with their future husbands, mind you, but as a way of staying connected to who they are.

Sometimes we lose sight of that. I know I did.

It’s weird that women give up their names so easily in our culture and men very rarely do. I think couples should assess who’s got the better name and run with that.

When I went to the DMV after the divorce to change the name on my driver’s license, clutching a Ziploc bag filled with all the ID points you now need, an older woman straight out of central casting sat behind the desk and grabbed my plastic bag. She scrutinized all my information and just when I thought she was going to tell me I needed to go home and dig up another utility bill or Social Security card, she looked up and said, “I like your maiden name better.”

I assumed that in some circles, I would always be Mrs. X. In the beginning, my kids’ friends would say, “Hi, Mrs. X” and then cringe as if they said something wrong and I would assure them they had said nothing offensive. Now, they don’t give it a second thought. The kids of a close girlfriend of mine dabble with an assortment of names: “Miss X,” “Ms. X,” and the teenage girl finally settled on “Amy,” which her mom quickly squelched and now I’m back to Mrs. X. And that’s okay.

There’s confusion living in a small town for so long and being known one way, only to try to get everyone to call you something else.  Fast-forward a couple of years, and my new old name has started to stick. A woman I know in town told me that she was telling her husband – who I’ve only gotten to know after my divorce – that I had sent him an e-mail, but she was using my married name. “Who’s Mrs. X?” he finally asked.

I worry that it makes my kids feel that we’re even less of a family now that we all have different last names. But then I think about the few women I know who married and kept their maiden names and despite confusion at doctor’s offices and calling to set up play dates, at the end of the day the kids know who their mom is.

Maybe there’s hope for younger generations. When my youngest son and I were addressing envelopes to mail to his sister at camp last summer, I showed him how I had written my name for the return address and he asked if he should do the same on his letter.

“Well, you’ll use your name, buddy,” I explained, pointing to the upper left hand corner of the envelope.

“I think I’ll use yours, “ he told me, starting to write his first name and my last name together in blue ink. “You know, I am half yours.”

6 thoughts on “the name game”