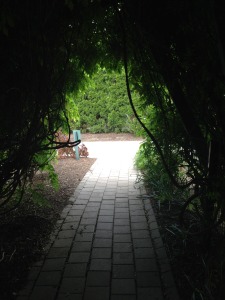 Five years ago, I sat on my therapist’s couch and told her I felt like I was drowning.

“I feel like I’m treading water as fast as I can and I still can’t keep my head above water,” I told her.

At that point I had four children in four different schools, which meant four back-to-school nights, four sets of teacher conferences, four pick up and drop off times and locations and I had just started working full-time from home.

Oh, and I was going through a very stressful and acrimonious divorce.

So I was probably looking a little jittery sitting there on her loveseat in my yoga pants, clutching one of her throw pillows to my chest and pouring out my troubles. And then, in the same calm, soothing voice she uses to quote Goethe and Rumi and say things like, “And how did that make you feel?,” my therapist suggested I make a chart of how things would change over the next five years.

“You need to see that your life will get immeasurably easier,” she cooed.

And because I do just about everything she tells me to, I went home and did just that and saw on paper that over the course of five years I would soon have one child leave for college followed by another the following year. My third child would enter high school and my little guy would finally move to the middle school, which was within walking distance of our house. By the end of those five years, I’d have three kids with driver’s licenses and my little guy would be almost 12.

It did look a lot easier. And really far away, too.

But that’s where I am right now and guess what? My life is so easy it’s almost too easy.

I didn’t even have to make dinner last night.

My daughter is now a senior in high school and usually off at one of her many jobs or out with her friends and my little guy spends a few days a week involved in some sporty endeavor so it’s pretty much just me a lot of the time at home. And my cat.

Five years ago I wouldn’t have believed how drastically things would change. Back then I was working 60-hour weeks and juggling college applications and well visits, food shopping and laundry, and trying to stabilize one of my sadder kids.

But here’s the scary thing: It’s only going to get worse. According to my calculations, in five years the only creature requiring my assistance will be the cat, if she’s still around. I will have three college graduates (God willing) and my little guy will be a junior in high school and driving. And, even crazier, my oldest child will be turning 27. That is nuts.

And unlike five years ago, when my projections for the future brought me relief, now, seeing how grown up everyone will be just makes me sad. I want to go back in time. I mean, I don’t necessarily ever need to relive that period in my life when I had three teenagers living under my roof. That was kind of scary.

But for the longest time, it all seemed so endless. It seemed like I’d always have kids up my ass. It felt like I’d be wiping faces and fannies and driving people all over creation forever. And now, just like that, I don’t.

It’s all so trite. So totally cliché. But it goes super fast. One minute you’re scattering Cheerios on a high chair tray and cooking up a box of mac-and-cheese and the next, you’re watching Scandal instead of making dinner.

So, all you little mommies reading this right now, I get that your kids are assholes. I really do. All that whining about having to go to bed and telling you you’re the WORST MOM EVER. You just want them to grow up and move out already.

But the thing is, someday you are going to miss those assholes and wish they’d ask you to take them to Toys R Us or Game Stop. You’ll wish they were home so you could spend two hours making them a dinner they will tell you is disgusting or hide half-chewed pieces in their napkin. You’ll wish someone would complain about having to DO EVERYTHING. You really will.

11 thoughts on “The Light at the End of the Tunnel”