My neighbor Susan came over the other day and handed me this: 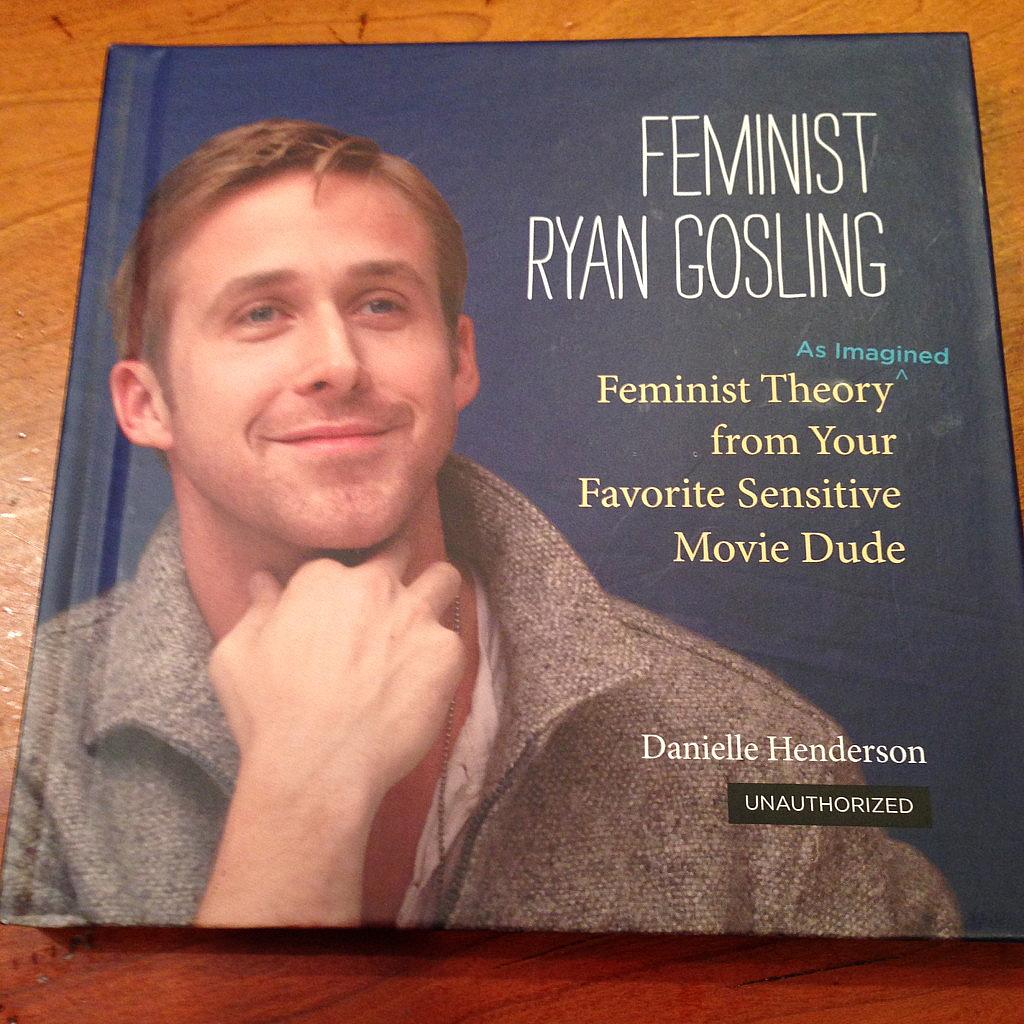 And I was like, “That’s weird, cuz I already have this”:

“I had to,” Susan told me, explaining she saw it while shopping at Francesca’s. “I knew you’d love it.”

And she’s right, of course, I do. That book cracked me up when my oldest daughter gave me the first one for Mother’s Day and I loved Susan’s copy, too. But what’s even funnier is that I have become the unlikely recipient of all-things Ryan Gosling.

I don’t know when it started, but as with so many things these days, I’m guessing it was on Facebook.

Maybe I mentioned in a post that I had just watched “Crazy Stupid Love.” For, like, the umpteenth time.

Or it’s quite likely that I then went a bit further and described how my heart skipped a beat when he took his shirt off before the Dirty Dancing scene.

And then maybe I continued to make jokes about how hot he was until the gifts of the Gos started to trickle in.

So now, much the way some people have a theme that folks tailor their gift giving around – like I knew a guy who had an “apple” theme in his kitchen and folks gave him dishtowels and oven mitts with the fruit printed all over it, or my sister-in-law has a thing for elephants so whenever I see a notepad or necklace with the pachyderm on display I want to buy it for her – I, too, have hit upon something that folks can’t stop giving me.

Well, not the real Gos – I actually don’t know if I could handle that. But I’ve got pictures galore of the actor Ryan Gosling on my Facebook wall, my bookcase and even taped to my refrigerator. And I’ve never seen a Gos meme I didn’t love.

Which is hilarious, really, since I’m not the boy-crazy type. None of us here really are, which is probably why my daughters in particular seem to get a kick out of gifting me the Gos whenever they can.

So now I am the proud owner of two copies of a book featuring The Gos making dreamy feminist statements (and he just knows he can get me by mentioning The Gilmour Girls). 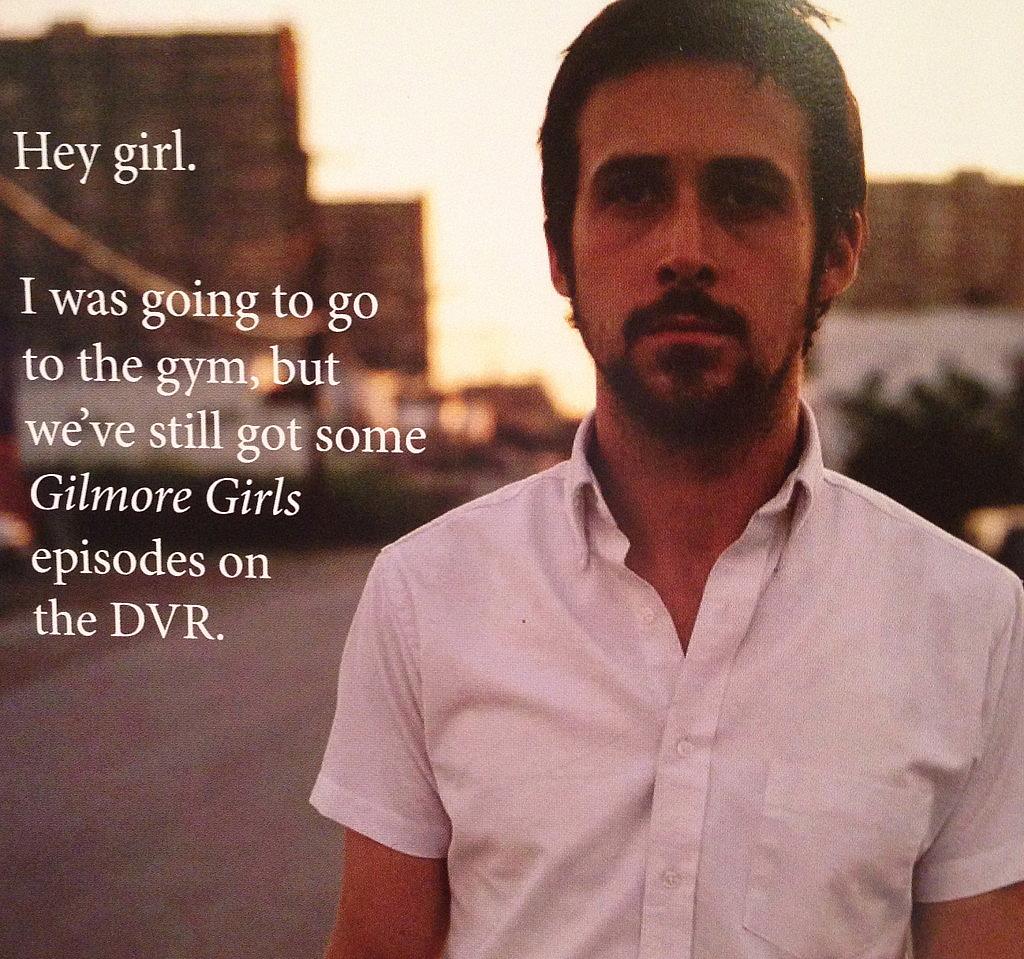 My other daughter designed her Valentine’s Day card to me this year based on the Gos. 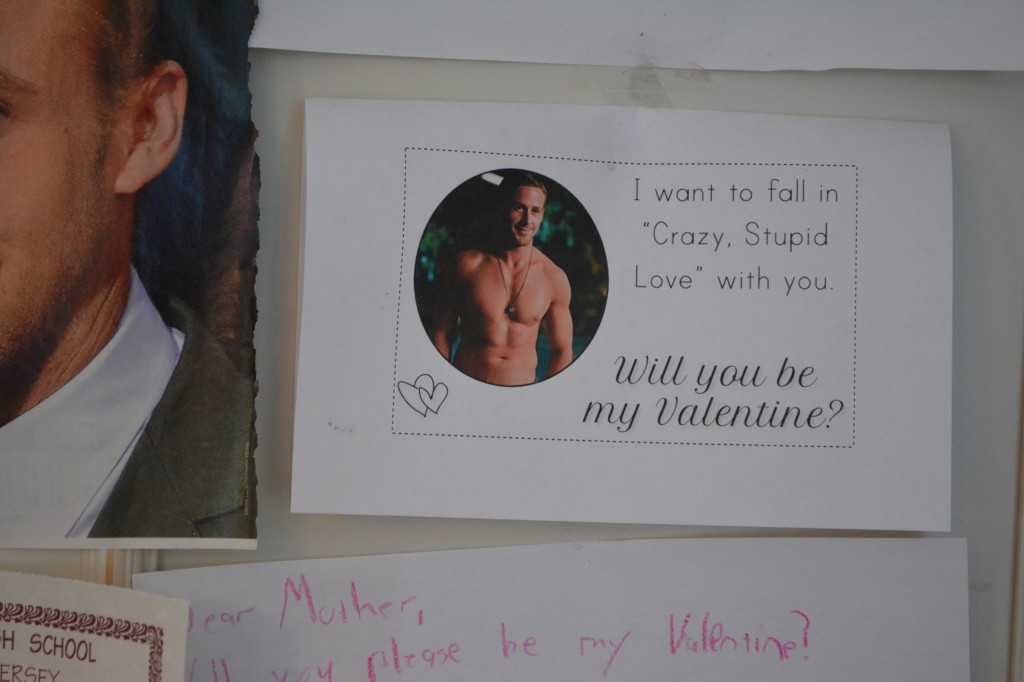 I’ve gotten the most beautiful Gos collage for Mother’s Day from my niece, Emily. 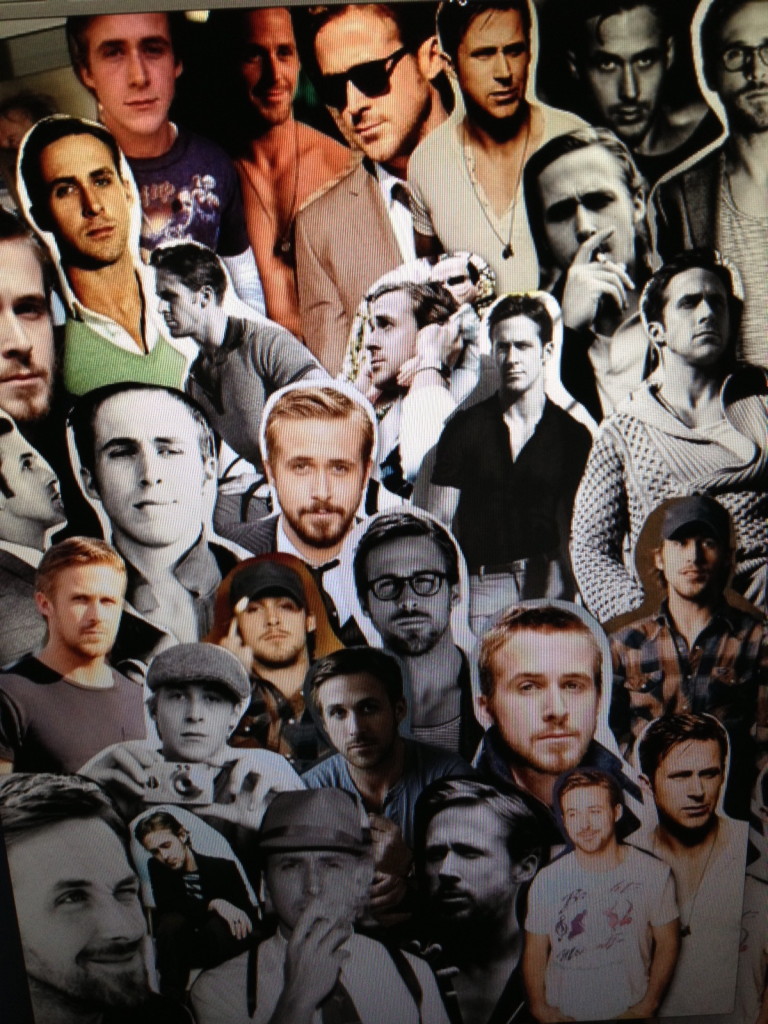 Birthday wishes from the Gos, via a meme my gal pal Kathy created for me, that included my top three favorite things of all time. 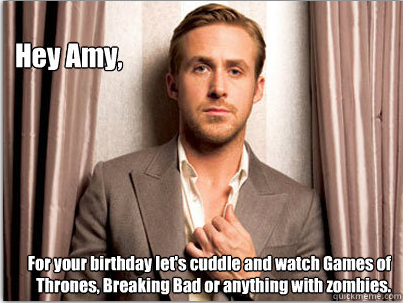 This nifty notebook where I can doodle, compliments of my girl Jamala. 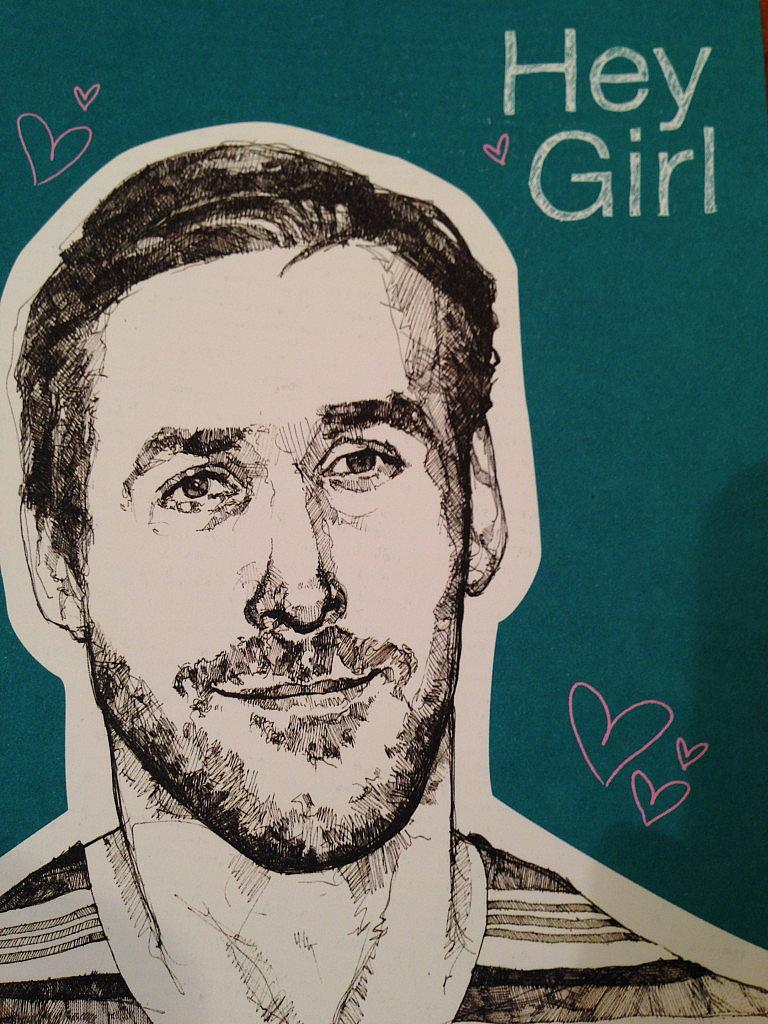 And even encouraging words for the writer in me. 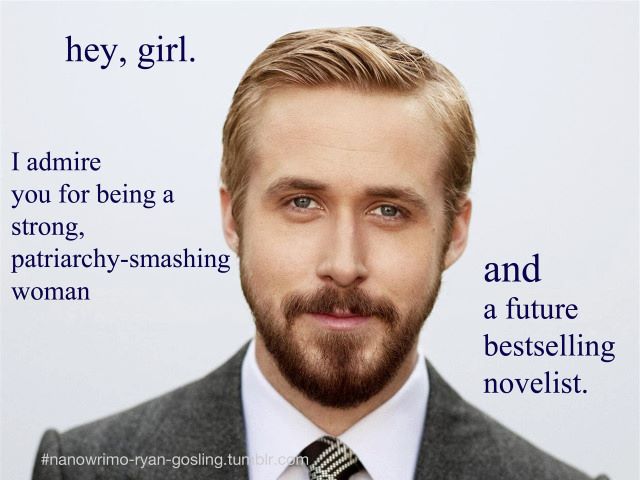 I’ve even got a big, like life-sized picture of the Gos’s face, ripped out of a magazine, that we’ve taped to the frig and it’s kind of creepy but he always seems to be looking at me now matter where I’m standing in the room but I’ve taped him right at eye-level so if I ever needed to give him a smooch I don’t have to work too hard. 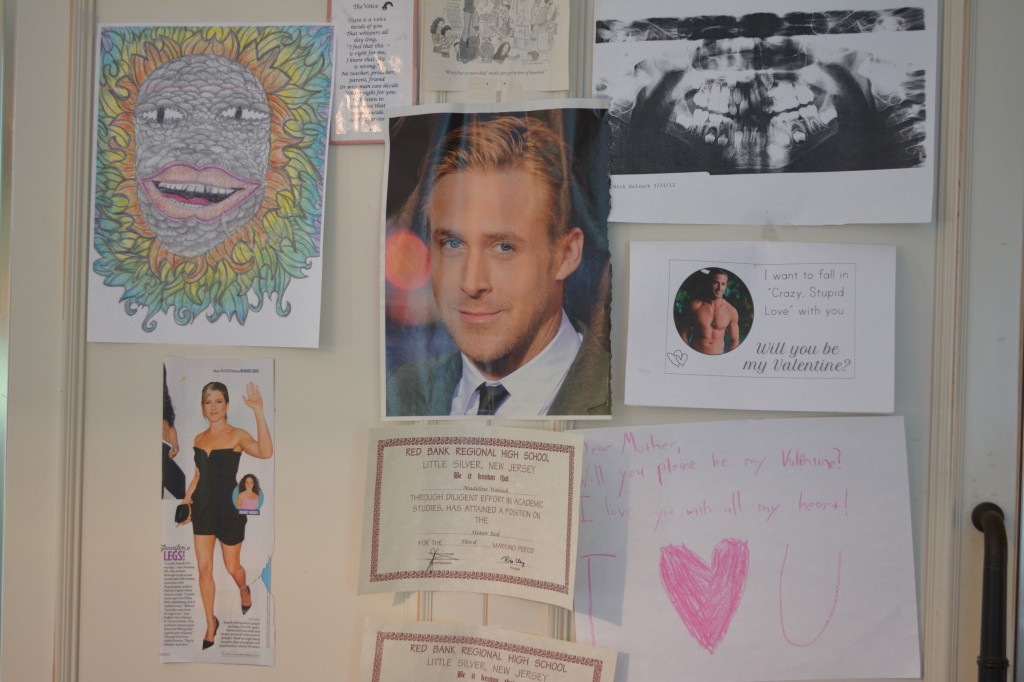 And the funniest Gos gift I got was a heavily edited photo that shows him standing with his arm around me, but I am actually a mixture of my own head and torso glued on top of Jennifer Aniston’s skirt and legs. A dream come true.

At this rate, I’m going to have to hire a curator to tend to all these treasures, valuable not only for their Gos-iness but also because they’ve been bestowed by women who really know me. They know I love zombies and “The Gilmour Girls” and have a weakness for super-cute younger guys.

And frankly, if I have to have some kind of a theme, I’d rather have the Gos than apples or elephants.

9 thoughts on “The Gos and Me”