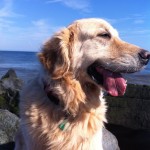 I went for a run this morning, the same three-mile loop I’ve made through this small town for years, and as I turned the corner back into my neighborhood, I felt that quick pang of sadness remembering that was usually the exact moment in the run that I would let go of Rudy’s leash and let him sprint ahead towards our driveway and home. Oftentimes, he would bend down and pick the end of the leash up in his mouth and prance the rest of the way, proving to me that he was, indeed, the man and didn’t need my assistance.

Rudy, my 10-year-old Golden Retriever who personified unconditional love, died fairly suddenly six months ago and at least once a day, there is that split second when I remember that he’s gone. When I am reminded that that’s not his big body I think I see outside on the deck, pressed up against the glass door or splayed under my desk, as it he weren’t 95 pounds of hair – oh, all that hair – shoved under my feet.

He was a glorious creature, my fifth child and, possibly – aside from the poop eating – potentially one of the best of the bunch. He made me a better mom, too, and taught me to appreciate those in my care.

Since Rudy’s death, people naturally ask me whether I’ll get another dog. Initially, while still in the depths of grief – when looking at the empty space under the kitchen table would trigger uncontrollable sobbing and screaming his name – I quickly dismissed the notion of bringing another pet into my life. “How,” I asked, “could I live through that again?”

But as the initial pain has softened to a dull ache, I’ve decided that it’s not my reluctance to open myself up to love and then loss (because as my friend Kathy so kindly pointed out, “That’s life.”).

No, I don’t want a new dog because my life in no longer moving in that direction. I no longer want to manage waste. You know, poop. I don’t want to have to deal with it up someone’s back, in their pants, on the carpet, or once, even on my bed.

But that’s a story for another day. 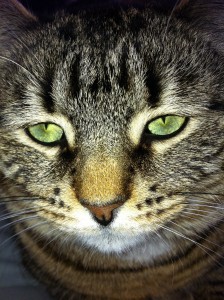 The cat is biding her time until she can find a way to oust me.

Two of my four children are now away at college and you know what? It’s worth every tuition penny, having them and their thorny teenage personalities and late night potato chip eating eight hours away.

For as much as I carried on to my now-ex about needing another baby (or two) to feel complete (I really said that), having just two kids at home to take care of rocks. And now that Rudy’s not around giving me guilty eyes every time I walk past, reminding me it had been days since he’d been for a walk, it’s nice to have so much less to feel guilty about.

Ironically, my neighbor Susan brought home the most adorable 12-week-old Golden Retriever puppy yesterday and it did give me the same feeling that a nursing mother has seeing another infant. I texted to see if I could come over and meet him, and grabbed my drink I had just poured and ran over. There he was, as perfect a puppy as any LL Bean catalog had ever seen, all blonde and fluffy with a chill disposition and frankly, the spitting image of Rudy at that age.

Susan’s three boys – all under 10 – couldn’t believe the dog was there either, and were besides themselves, alternately telling the puppy to fetch, come, sit stay and then carrying the little guy around.

I stood with Susan in her kitchen and marveled at the puppy’s cuteness and the boys’ excitement and told her that it reminded me of when I would bring a new baby home from the hospital, the new baby was generally the least of my problems.

We stared at the puppy a little longer, and then I picked up my drink and went home to my quiet house and settled in for the night.

6 thoughts on “the dog days are over”