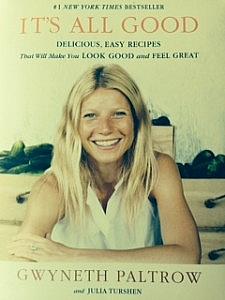 It can’t be easy being Gwyneth.

What with all the kale she’s got to juice, arms she needs to spin in circles with her friend Tracy the fitness guru and $350 Veronica Beard shorts she must ferret out for us to buy on her website, I don’t know where she finds the time to yell at her kids and watch TV like me.

And on top of that, there’s that rock star husband that needs to be kept happy.

So I wasn’t super surprised when Gwyneth Paltrow and her husband Chris Martin announced their split Tuesday on her much-maligned blog, Goop.

“It is with hearts full of sadness that we have decided to separate,” the two announced in a statement that fell under the blog post heading “Conscious Uncoupling.”

The end of the Oscar-winning, kale-eating actress and British rock star’s 11-year marriage set off a flurry of snarky tweets on Twitter:

“Gwyneth Paltrow and her husband “consciously uncouple.” She even gets a divorce in a pretentious way.”

Gwyneth Paltrow says,”Yes, this is my divorce attorney” *points to kale smoothie*

Even Gwyneth Paltrow‘s divorce is going to be perfect.

Guys, Gwyneth Paltrow is going to have the most amazing organic & sustainable  divorce.

And I get it, Gwyneth and her perfectly pretentious life can be really annoying. Her suggestions that we substitute Vegenaise for mayo on our turkey sandwiches and roll our own dumpling wrappers don’t always seem doable for the single mother of four living in the New Jersey suburbs.

But it’s  a funny coincidence that she should be all over the headlines this week because her face and name have been all over my kitchen lately.

My neighbor Susan brought over the copy of Gwyneth’s newest cookbook, “It’s All Good,” for me to take a look at after I expressed some interest it. But I was really interested in more of a “What is that crazy bitch up to now?” kind of way rather than a “I’d really like to make some of those recipes” kind of way.

I had been on the Goop website a few times and could not relate to all the talk of kimchi and $570 charm bracelets.

I was dubious, at best.

But another girlfriend who’d borrowed the book reported that she had found a number of good recipes to incorporate into her family dinner plan, and even though I think this friend has actually made her own sriracha sauce – something I never, ever aspire to do since I can buy it at Wegman’s – I thought, “What the hell?”

And a few days later I actually ordered my own copy on Amazon.

Here’s the deal: I have really tried to clean up not only my own eating habits, but those of my children, no matter how much they cry about it. I’m really trying to eliminate as much processed, sugary crap as I can.

It’s been over-reported on this blog that I’ve tried to shed some of my recent mid-life weight gain by breaking up with old friends like Mr. Cheez-Its and Senor Tostitos, which is not easy because they were beautiful, beautiful companions. They never suggested I go brush my teeth or take the scrunchie out of my hair.

And, because a certain someone I work out with is all about protein – don’t even get him going about protein – I’ve tried to incorporate more of that stuff into most of my meals. So my diet has slowly shifted from sandwiches, toasted bagels and Honey Bunches of Oats (sigh) to Greek yogurt, smoothies and quinoa.

I’ve even started eating a lot of kale.

The kids and I have been enjoying a bunch of Gwyneth’s recipes for dinner over the last few weeks. We loved the Teriyaki Chicken and the Chicken Francaise. We wolfed down the Spicy Brussels Sprouts. And last night I made the Super-Crispy Roast Chicken, which we devoured, but nobody wanted any part of the White Bean Puree With Turnip + Roasted Garlic that I made to go along with it. The kids have their limits.

Of course, all of those recipes were pretty labor-intensive and probably wouldn’t have happened – especially on such a regular basis – if I was still working full time. But in my semi-retirement, I’m trying to spend time doing all the things I didn’t have time for a year ago, like making recipes with more than three ingredients and getting my little guy to read every night.

Plus it breaks up the monotony of my usual chicken recipes.

While paging through the cookbook, I try to ignore – or at least not get annoyed by – all of the accompanying photos of Gwyneth and her two children, walking through a meadow or sitting cross legged on the beach waiting for their paella to simmer. It’s all a little too perfect, but who am I to judge?

Who are any of us to judge?

Listen, I’m the first one to admit that it isn’t easy being married. It’s hard fucking work. And I can’t even begin to imagine what it’s like trying to do that in the public eye, much less having to announce when it came to an end.

But so far, at least according to their joint statement, Gwyneth and Chris seem to be heading in the right direction, stressing that they are “parents first and foremost” and that they “will always be a family.”

Following the announcement on the blog, Gwyneth brings in some expert advice in a post to describe what an “unconscious uncoupling” was, which could be viewed as another pretentious Gwyneth idea, or a very sane and compassionate way to end a marriage. If you ask me it’s like everything you need to know about marriage and divorce, in about 1,000 words (compliments of Dr. Habib Sadeghi and Dr. Sherry Sami):

“If we can recognize that our partners in our intimate relationships are our teachers, helping us evolve our internal, spiritual support structure, we can avoid the drama of divorce and experience what we call a conscious uncoupling. A conscious uncoupling is the ability to understand that every irritation and argument was a signal to look inside ourselves and identify a negative internal object that needed healing.”

Boom. That’s it. It makes it all about self-awareness and understanding rather than anger and resentment.

I hope Gwyneth is able to find time to figure that all out in between her sage charring and detoxing.  It’s taken me a good six years of therapy to start to see things this way. And I hope she finds peace, as I have, in focusing on all the good things about her marriage and the beautiful children that came out of it.

9 thoughts on “The ‘Conscious Uncoupling’ of Gwyneth & Chris”