I drove eight hours yesterday for the big college move. Again. He’s a junior and she’s a sophomore at the same school, and the novelty — at least for me — is wearing off.

And while things aren’t as shiny and exciting as they were two years ago, I can guarantee that the two-day excursion will still include a very expensive trip to WalMart, at least one meal at a fast food restaurant and chardonnay (that last part is for me).

It makes me think back to the big moment, two years ago, when I said good-bye to my oldest, and what a milestone that was in my life, and thought I’d share an essay I wrote in retrospect.

I’ll let you know how it feels to be an old pro when I return next week (I figure at this rate, by the time my youngest goes in 8 years I’ll be able to just send him by himself). 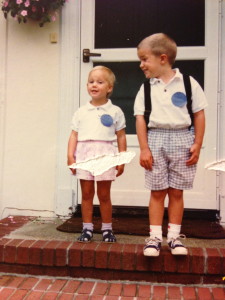 There’s a picture pinned to the bulletin board in my kitchen — half hidden by silly greeting cards and bumper stickers that I’ve collected — which has become our iconic family back-to-school photo. In it, my two oldest children stand on the front stoop of our old house, a basket of late-summer impatiens drooping behind them, on the occasion of the oldest kid’s first day of preschool, just shy of his fourth birthday.

Pinned to the front of each of their shirts is a construction paper nametag that had been sent by the teacher to be worn on the first day of school. My son’s has his name on it and my daughter, who is only 17-months younger, is wearing the tag that had been sent for me to wear, but she assumed it was for her and who was I to burst her bubble? So I pinned it to her little white polo shirt and, if you didn’t know any better, you would have thought that it was her first day of school too, the way she puffs out her chest and looks directly into the camera, her lips forming the “ch” of “cheese.”  Her big brother stands beside her, looking away from the camera and grins at her, as if to say, “Can you believe this?”

That picture started a trend that we’ve continued on the first day of each school year ever since – even with the addition of two other children and when our world got a little rocky when the kids’ dad moved. Of course, as they got older, the kids would gripe about my “obsession” with organizing the first day of school photo op. Last year, that sweet oldest son, who looked at his sister with such love and excitement on his first day of preschool, actually flipped the camera the bird after I wrestled him to the front stoop to document the first day of his senior year of high school.

I kid you not.

Over the years, I have not been as diligent about documenting certain events that I did when the kids were younger. The Christmas slideshow is no longer an inventory of each gift the kids received and really, do we need to memorialize every Easy-Bake Oven or Harry Potter Lego set that comes into our house?

But back-to-school photos I strictly adhere to.

I got creative and copied that iconic first-day-of-preschool photo to make a card for my son to open after we dropped him off to start his first year away at college. It was tucked into a bundle of frames his sisters and I had picked up at Target and filled with family photos, all tied in a big bow and left on the desk in his dorm.

In the note, I reminded him of the occasion of the photo and how proud I was of the person he had become in the years since the picture was taken. I wrote in the note that I knew he would continue to excel in college as he had throughout high school and looked forward to watching what he would do next.

The whole family had driven the eight hours south to see him off and get him settled in this new chapter of his life. We hung his posters and made his bed and all took a ride over to the local Wal-Mart for extension cords and light bulbs. We walked around the sprawling campus with the rows and rows of imposing grey stone buildings and picked up his software for his major and the million-dollars worth of textbooks at the bookstore.

And when it seemed we could do no more, I left the bundle of photo frames on his desk and had him walk me and his sisters out to the car in the lot behind his dorm to say good-bye.

It’s that moment you’ve kind of been anticipating your whole career as a mom. The moment when you have to push your little bird, whose gaping mouth you’ve been lovingly placing worms into for years, out of the proverbial nest. It’s scary to imagine how hard he’ll need to flap to stay aloft. Or how empty the nest will seem without him.

We stood by the car and my oldest daughter, who had stood next to her brother so proudly on our front stoop so many years before, turned and wrapped her long arms around him to say good-bye.

Then my son stepped in front of me and I knew the moment had arrived to say all the things I had meant to say — like reminding him to floss daily and to say no to drugs and study hard — but all I could do was throw my arms around his neck and cry. Then I felt his back moving as he sobbed and was grateful that he, too, was sad. And it was then, that my younger daughter snapped our picture with her camera.

It’s the newest addition to our first day of school photo gallery and perfectly captures what it’s like to watch your child leave your nest. In it, my son’s back is to the camera and his head leans down towards me in an embrace. My face is contorted in an ugly cry and my arms hug him tight around his back with my left hand wrapped around the back of his neck, holding it the way I did when he as an infant.

We pulled apart and wiped our eyes and said our final good byes and I somehow navigated the car through the traffic-clogged roads surrounding the dorms and eventually back onto the highway. The girls and I sniffled a little bit more, and then settled in for the long drive home.

I sent him a text the next day to see how he made out his first night in the dorm and if he had found the pictures and card we had left on his desk.

His text continued, “When you get the chance, can you send me my basketball I left in the garage?”

And it seemed that his wings would work just fine. 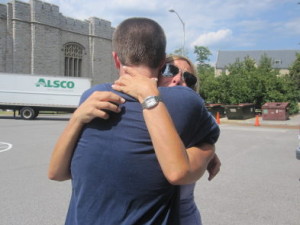 24 thoughts on “the college good-bye”