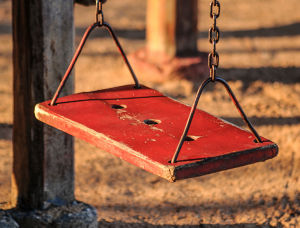 Sometimes, the moments strike when you least expect them. Right when you’re sitting there, in the third row of the high school auditorium chatting with another mom while both your daughters, now seniors, sit onstage and wait to be inducted into some honor society that will look good on their college resumes.

You’re sitting and chatting about the girls – maybe about how they keep turning their heads to avoid having their pictures taken by you – when they suddenly stand and start filing towards the front to receive their certificates.

And all of a sudden, when you try to take a picture of your young neighbor, the same little girl who moved across the street a dozen years ago whom you described to people as Punky Brewster and who has become a staple in your house for the last decade, your vision blurs as the tears start to fill your eyes and you get that burning feeling at the back of your throat.

And you’re not even getting your period.

You don’t even try to take a picture when it’s your own daughter’s turn to walk to the front of the stage and receive her certificate. You just want to take it in, the beginning of the end. Over the next few months, there will be a lot of these ceremonies. Your daughter and her fellow hard-working students will be honored at various inductions into this society or that as they round the bases towards June.

They’re all heading down that same path that zillions of high school seniors have walked in the past and with, for many, the same inevitable end. They will graduate and a month or two later, will take their proverbial shows on the road to college.

And I know I’ve been down this road myself a time or two with my older children but for some reason, it’s really hurting a little bit more this time around. When the first one left and then his sister, it was like, “Well, there’s plenty more where that came from.” But now that well of children is starting to run a little dry.

Punky’s mom across the street happens to be in the same ever-shrinking boat. When Punky ships off to school in August, my pal will be left at home with her hubby and 15-year-old son to keep her company.

“Next year the only thing I will hear are farts,” she texted me the other day.

They do this, kids. They start out making you weak at the knees with the love you feel for them – their tiny little fingers and sweet smelling heads – and then push you to the brink of homicide after a few short years of  incessantly asking, “Why?” and “Why not?” By the time they are teenagers, you really start to wish that they would just go away. And then, just as suddenly as they entered your world — they start to make their exit.

But of course they come back, bringing bags of laundry and a newfound disdain for midnight curfews, but it’s never the same. It all starts to seem a lot more temporary.

I look forward to the future, but I’ve really loved being a mom. And not that I’m not going to be the mom anymore, but it’s just changing. I mean, sometimes the kids call me “Amy” when they’re trying to make a point and some are old enough to get staples in their head and CAT scans without my consent.

And I think if I could have any super power, what I’d really like to be able to do is to go back in time. I’d like to go back and spend a late afternoon, between naps and making chicken nuggets, sitting on a park bench and watching my little ones go up and down the slide for hours and beg me to push them on the swing. And, unlike before – when I’d resist as long as I could and tell them they needed to learn how to swing themselves – I’d get up and go over and give them a great big push.

20 thoughts on “The Beginning of the End”