WARNING: THIS POST IS NOT FOR THE FAINT OF HEART.

Here’s my usual early morning routine: I hit snooze on my iPhone three times and as the fourth round of  the annoying harp music tries to rouse me, I drag myself out of bed, use facilities, weigh self — and either congratulate self on showing self restraint the day before or curse that bag of vegetable sticks I paired with the nice bottle of Tuscan red — and head downstairs to make coffee. I feed the cat — who I am pretty sure is legally blind because she skitters frantically in front of my feet and knocks into objects as I make my way to her bowl — and measure six teaspoons of half and half into my coffee (which somehow is the perfect amount) and head back upstairs to write for a bit before I make breakfast for the kids.

I did all that Friday morning and as I eased myself back under the covers and went to set my mug down on the nightstand next to my bed, I saw this:

That, my friends, is my new, absolute worst nightmare. He/it was featured on the premiere of American Horror Story Freak Show Wednesday night and thankfully he was not standing next to my bed but his image was tucked under the glass on the top of the skirted table next to my bed. 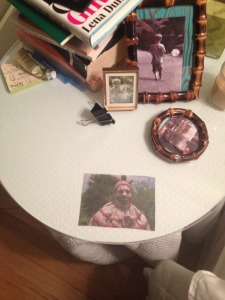 I had told my daughter, that bitch, that the clown had kept me up the night before after we sat and watched the 90-minute first episode of this season’s AHS. We had sat on my big red sectional downstairs with our pal Punky to watch it but I spent most of the time with my thumbs plugged into my ears and the other eight fingers curled over my eyes. For a while I had turned my head away from the TV towards the girls and tried to gauge when the clown’s horror was over by the look of terror on both of their faces.

“That was so stressful,” Punky said later as she was leaving, right before she darted across the street in the dark and we yelled at her to watch out for the clown hiding in her driveway.

I went to bed that night and promptly woke up two hours later thinking about Twisty, about the first scene of the season opener and how he brutally attacks a young couple picnicking. As he repeatedly stabs the guy, the girl gets up from the blanket and starts running away, but keeps stumbling — just like the dreams I have when I’m trying to run away from something. And just like in a really bad dream, the clown gets up and starts to chase her and it’s like she just can’t move forward and he’s getting closer and closer. Terrifying. 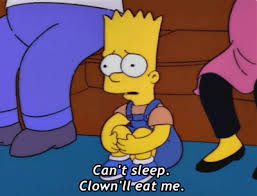 You said it, Bart.

So I guess my 17-year-old was annoyed when I ended up going out to dinner Thursday night (a lovely date with my girlfriend that included wine, filet mignon and her driving me all around that is going to be tough for any future date to outdo) she was annoyed and decided to make me pay. I guess having to boss her little brother into the shower and bed was a real burden. So she set her evil plan into action.

After I found Twisty next to my bed the next morning, I headed downstairs to get our day started. I opened the fridge and was greeted with this: 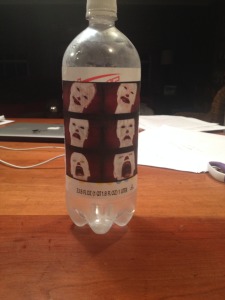 The horror of diet tonic water.

I went to get out stuff for breakfast and found this in our Kirkland egg container: 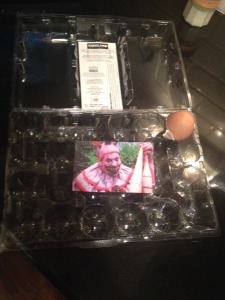 Twisty hiding in the egg carton.

“LOL,” she wrote back from the comfort of her bed.

“I AM GOING TO GET YOU,” I threatened.

And then, as is the case when people in my life have damaged me in one way or another, I did what came naturally.

I made her pancakes.

I am really sorry to have burdened you with this.

Sign up to get all my posts sent directly to your inbox to read at your leisure (usually they’re not so terrifying). Just plug your email into the “receive new post in your inbox.”

6 thoughts on “Terror in My Bedroom”