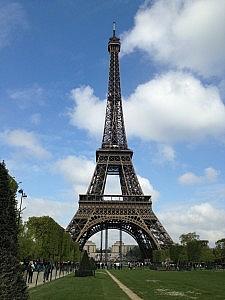 Springtime in Paris, courtesy of my 16-year-old daughter.

I didn’t leave the United States until I was 23 and out of college. Up until then, the extent of my air travel consisted of a handful of trips to Florida and a visit to St. Louis to stay with my aunt and her family the summer my parents separated when I turned 12.

As the oldest of six kids, before two more would join us after my mom got remarried, vacations didn’t really happen much for me as a kid. We did drive from New Jersey to Orlando one year – my parents, five siblings, a grandfather and me, and I was tasked with sitting in the way back of our station wagon with an 18-month-old struggling with diarrhea (sister, you know who you are). And for about five summers I joined my mom’s parents on their annual journey to western Maine, with the occasional pit stop on Cape Cod to stay with a great uncle.

But when I finally travelled to Europe with a girlfriend for two weeks in the spring of 1990 — a super-low-budget affair funded using my VISA card and cash advances — I got bit by the travel bug. We rode the train from Paris to Rome to Florence to Nice and back to Paris and frankly didn’t know what the hell we were doing. We did, however, stuff in as much as we could – including the Louvre, St. Peter’s, a day-trip to Cannes and a makeout session with some Italian guys – before heading home.

Unbeknownst to me then, I’d be married six months later and a mom less than two years after that. International travel was pushed to the back burner while I learned to navigate the foreign soil of breastfeeding, night terrors and potty training for another dozen years.

So when I had the opportunity to join my then-husband for his annual trip to London around 2006, I jumped at the chance even though farming out four kids and their assorted schedules – basketball games and birthday parties – for a long weekend was akin to brokering a Mid-East peace deal.

But it was worth it. We had tons of fun – we were always good at having fun together – and got to hang out with an assortment of people he worked with in shipping from all over the world, and I returned with him two more times before we split up.

In the perfect world, we would have introduced our kids to international travel as they got older but, alas, the marriage went the way of the pound and with two college tuitions coupled with an addiction to Amazon Prime, I couldn’t exactly swing taking four kids to Europe on my own.

Which is why I encourage them — constantly – to to jump on any opportunity that comes their way to get out of the United States and see the world themselves.

My oldest daughter went with her high school to Italy over spring break of her junior year. She traveled to Rome and Florence and came home with an appreciation for wine and Nutella and artsy photos she took of the Coliseum.

I’ve been trying to push her to spend a semester abroad now that she’s in college, but she just drags her feet and her older brother says he doesn’t want to miss anything going on at school – a rocking tailgate or fraternity party – and that Europe could wait.

What they are both failing to understand is that if they don’t go somewhere now, they’ll never again have the opportunity to be immersed in another culture for an extended period of time and able to travel from there, on their parents’ dime.

They’ll be stuck jacking up their credit card balances to cram as much as they can in 14 days and staying in sketchy pensiones, unable to afford anything but like the cattle car on the overnight Eurorail from Paris to Rome. Believe me, I know.

My 16-year-old daughter took off for Paris Saturday afternoon for a 10-day trip with her high school. I literally scraped together the money – which I really didn’t have any business spending – for her to join many of her good friends tour the City of Light and discover that there’s a whole world outside the good ol’ US of A.

We really spent a lot of time getting her ready for the trip — making sure she had appropriate rain gear, walking shoes and a fashionable Old Navy ensemble – unlike when her sister flew to Europe three years ago. Back then, I don’t think I was involved in the clothes she packed and couldn’t tell you if she even had an umbrella, and I think that it’s a sign of how much things have changed around here since then.

Three years ago I still had four kids living at home and had started working full-time and I don’t think I could even see straight, much less worry about how many pairs of jeans my daughter had packed for 10 days in Italy.

I didn’t even know what time to pick her back up from the high school the day they returned . I actually had to call another family whose son was on the trip, people I didn’t really know well, to find out and you should have heard the tone in the dad’s voice when I had to lay my clueless cards on the table. He was surprised, at best. He had obviously never spent any time trying to operate as a disorganized, working, single mother.

But to my older daughter’s credit, she didn’t really need me. Later, I learned that some of the kids had called their families while in Italy, but my girl left her iPhone at home and never really felt the need to check in. I probably don’t blame her.

Flash forward three years, one job and two fewer kids later, and I had a lot of time to focus on my younger daughter’s trip. And, unlike her sister, she brought her phone along and I’ve already gotten filled in on the adventure so far through iMessages and Snapchat. There’s Wi-Fi in her hotel, so I’ve gotten a picture of the view from the rooftop and one of her pretending to lick the Eiffel Tower in the distance.

I asked her to sum up the experience so far in three words and she wrote back: “Foreign. Fabulous. Frightening.”

“It’s just so different here,” she texted. “And I can already tell they hate Americans.”

I reminded her to keep smiling and to try to use the little French she knew – lots of pleases and thank yous – as much as possible and she’d be okay.

As the kids started to board the bus yesterday that would take them to the airport, I grabbed my daughter and pulled her aside for one last hug. I looked into her big blue eyes and tried to impart important final pieces of wisdom: Don’t talk to strangers. Sleep on the plane. Take notes on everything interesting you see and hear. Be careful because the alcohol there is a lot stronger than it is here. We laughed and she gave me one more big squeeze and I could feel my throat tighten and the tears start to sting my eyes.

“Stop,” she said and gave me a kiss and got on the bus with a wave.

As the bus pulled out of the high school parking lot, past the group of moms and dads gathered to wave the kids off, I had to wipe the tears leaking past my sunglasses.

Because as thrilled that I was that she was on the cusp of this great and possibly life-changing adventure, I hated to see her go.

It scared the shit out of me.

But, like figuring out how to navigate the Paris Metro or an overnight layover in the Milan train station – or, hey, even a divorce – these challenges have made for a richer, fuller life.