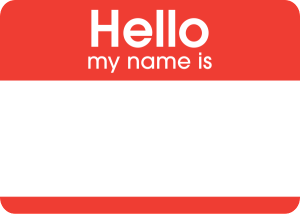 When I was in the end stages of my divorce a few years ago and struggling with whether I should reclaim my maiden name, my college roommate advised against it.

“What are your kids’ friends going to call you?” she asked, and went on to explain how her high school boyfriend’s mom was always Mrs. Whatever, even though she and her husband had been divorced for ages.

In the end, I decided that that demographic of the population – the friends of my four children – would have to adjust just like everyone else. And for the most part, that’s what happened. In a little over a year, people came to know and refer to me using my maiden name. Everything from my credit card statements to the nameplate that sat in front of me during monthly board of education meetings was adjusted to reflect the change.

And when I sent an email to one of the officials in my town for business and inadvertently used an old email address that had my married name, and the wife of said official told him to look for that name in his inbox, he asked, “Who’s that?”

But three years after the name change, the people who have no idea what to call me remain the kids’ friends and frankly, I don’t know what to tell them. Or their parents.

For my older kids and their friends, it didn’t really seem too weird to tell them to just keep calling me Mrs. X. That’s how they had known me for most of their lives and it just seemed easier and frankly, do they really care whether or not I am married or actually use that name any more?  No.

And while initially, that strategy worked just fine, the further away I get from ever having been Mrs. X, the weirder it’s starting to sound.

I went out to dinner with a slew of parents and children Sunday night – literally, there were like 15 kids sitting down at the far end of the table, my 11-year-old son happily eating his French fries among them.

So needless to say, it was loud, and I was busy chitchatting with the moms at the opposite end of the table, so wasn’t especially tuned in to what the kids were doing.

But then I heard a voice rise above the din and my son, apparently trying to get my attention because he needed my iPhone, was telling the boys around him to call for Mrs. X.

“Interesting,” I thought, that the person who knew me for the least amount of time when I used my married name would still think to refer to me as that.

And I don’t know why it is that calling me Ms. Y seems so weird, too. I’ve seen a lot of parents try to get their kids to refer to me as such. “Say ‘thank you’ to Ms. Y,” they’ll coax their kid after a day playing in my basement. Or, more interestingly, I’ll be referred to as Mrs. Y. Sometimes I’m “Miss Amy.” That’s weird, too, making me sound like some old spinster with cats crawling around my legs.

My decision to change my name was so not a political, feminist or angry statement. In the end, it just felt more authentic to go back to the name I was born with.

So maybe the answer, even though I was always a stickler for having my kids call all grownups “Mr.” or “Mrs.,” is for their friends to just call me “Amy.”

One of my older guy’s friends tried that out at a holiday party I had right before Christmas. Everyone had had a few cocktails and the boys were heading out and my son’s friend was saying good-bye but didn’t quite know how to address me.

“Yeah, Mom,” said my son. “My friends never know what to call you.”

“Really?” my son’s friend asked. “Well, okay. Good-bye, Amy,” he said before the two of them walked out the door.

I saw that friend maybe a week after that and thought it was interesting that he greeted me with, “Hi, Mrs. X.”

So, I guess it’s going to take more than a few cans of Keystone Light to make that change stick.