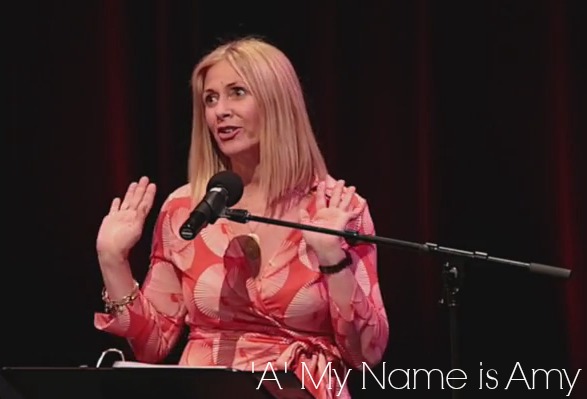 Me reading “Boss Ass Bitch” as part of the North Jersey 2015 Listen to Your Mother show on May 9.

This winter, I wrote a story about jumping off a cliff and getting a divorce, with a little emoji on the side, and got to read it live on stage in front of an audience who paid money to watch.

It was called Listen to Your Mother and our North Jersey show was one of 39 productions held all over the country Mother’s Day weekend.

I was one of 13 women who told stories that were sad and funny, poignant and bittersweet takes on motherhood, from post partum depression to adoption to one mom’s confession that she loves when her kids leave for summer camp.

The experience rocked on a zillion levels. I got to mix with strong women who shared little bits of their souls by telling their powerful stories. I felt so loved and supported by all the friends and family who made the trek to watch me tell my own story that day. And I am super proud of that story. I worked hard on it and loved the final product, which may or may not be because I called it “Boss Ass Bitch.”

The national LTYM just released the videos from all of the 2015 shows and it’s been fun to relive the experience and everyone’s stories. I am so honored my story was chosen and to have shared a stage with our insanely talented cast and encourage you to watch each and every one of their stories. I dare you not to be blown away.

Postscript: I learned after I wrote the story and was picked for LTYM that “Boss Ass Bitch” was a Nicki Minaj song.

“Awesome,” I told my 18yo — who had also penned the Valentine’s Day card that inspired my story — “it can be, like, my theme song.”

I then started imagining myself walking out on stage while Nicki sang something about what badasses we were. I would be like Rihanna or, oh just imagine, Beyonce.

I was going to be Beyonce.

“Um,” my daughter said, placing her computer on my lap and inching towards the door, “maybe not.”

She pressed play and closed the door. 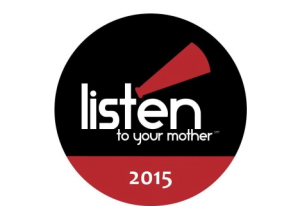 Here is a story about not giving up, an idea I don’t always embrace.

Recently, I had an audition for this show called Listen to Your Mother, which was about an hour’s drive north of my home. The North Jersey show is one of a series of LTYM performances held on Mother’s Day weekend all across the country and features folks getting up on stage in front of an audience to read something they’d written about motherhood.

The stories are funny and poignant, bittersweet and brutally honest and weave together all the threads that make that great big blanket that we call motherhood. This video fills in some of the details:

I had actually auditioned for last year’s show and was not selected. I had picked something that I had posted on my blog and thought was funny and practiced reading it aloud a bunch of times and drove north to do the same in front of the show’s producers, who were very nice but in the end did not select my story.

So when I began to think about what I would audition this year, I combed through my blog posts again to try to find something I’d written that resonated with readers about being a mom. I sent one contender to a friend of mine, who is serving as one of the producers of this year’s show, and she very gently responded by telling me to think beyond the kind of writing I usually posted on my blog.

Because I’d never thought about the structure of my writing. About telling a story that included how I felt rather than just writing about my feelings.

But I still didn’t know exactly what story I wanted to tell. Or better yet, I couldn’t think of any story of worth I had to tell and I shot down that rabbit hole of self doubt. Watching all of the YouTube videos from last year’s show for inspiration didn’t help either.

One reader was better than the next.

“Who do I even think I am?” I’d think after each video ended. “There is no way I am in the same league.”

I probably worked on about three or four different stories in earnest right up until the day before the audition and the Universe kept handing me reasons to throw in the towel. I’d just gotten back from a few days away and had plenty of other things to focus on other than spending hours trying to write a story. And then my ex decided that weekend didn’t “work” for him, and I would have the kids for a weekend I was not planning on having them, which included three basketball games on Saturday, the original day of my audition.

But my desire to be a part of LTYM was stronger than my inner quitter and after much hemming and hawing, I switched my audition to Sunday afternoon.

I wrote as much as I could on Saturday but still it wasn’t coming together. I even brought my laptop to one of my son’s basketball games, but I didn’t really have a good kicker. Then Saturday night came, along with a lot of dancing and other, weirder things at a party, and I awoke Sunday morning with about three hours left to pull everything together and leave to drive north.

And maybe I’m the kind of person who can only find inspiration in the 11th, do-or-die hour, but all of a sudden, I knew just what the story needed and once I put that nugget in place, the rest of the essay came together quickly. I made the hour drive to the audition listening to Lyle Lovett — interspersed with the bossy Siri telling me where to go — and felt satisfied with my story. If nothing else, I thought, stretching out something I had written earlier into a full story — with a beginning, middle and end — was a great writing exercise.

In fact, I said that to the three producers to whom I read the piece a little while later. They laughed in some places and sighed in others and while I didn’t think it was my finest five minutes, I also didn’t think I really killed it either.

So I was over the moon a few days later when I got the call that I had been selected to be a part of this year’s show. Like, screaming-to-my-kids, jumping-up-and-down excited.

I sat next to my daughter on the couch and tried to settle down and get back to the Walking Dead episode we were watching on our DVR. But every once in a while, I’d remember my great news and I’d start to nudge the 17yo and squeal. But she was kind of over my accomplishment and was really much more interested in the mayhem going down on our television and told me to calm down.

“Dude,” I said, “I can’t help it I’m just so excited. It just feels like everything has been going wrong for me lately up until now.”

She turned to look at me and said, “You literally just got back from the Bahamas.”

And, like, touché to that. She’s totally right. I am blessed in so many ways but creatively, professionally, I’ve had a crisis in confidence. I’d kind of lost my writing mojo and was feeling like, “Why bother?”

So it was the boost I needed. That reminder that I’m not totally terrible. And it’s not only an awesome feather in my writing cap but also lets me meet and work with some super-creative people. Yes, yes and yes.

I’ve loved seeing all the names pop up on Facebook after the official announcement to congratulate me on being picked and feeling all the love. 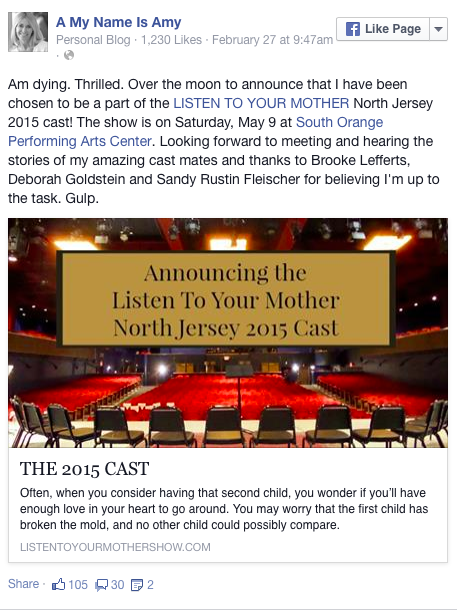 A bunch of people have expressed interest in buying tickets for the May 9 show, and you can find all of the details here. I would love to see as many friendly faces as possible in the audience that night and think that drinks afterwards will definitely be in order.

So what is the moral of the story? For me, more satisfying than the validation this gave me as a writer, is finding success in something I had really worked so hard on. And while, sure, it was cool looking at my writing in a new way, it’s great knowing that hard work really does pay off.

I hope my kids are paying attention because another thing I’ve learned, of course, is that you should always listen to your mother.

To learn more about Listen to Your Mother North Jersey 2015 show on Saturday, May 9 at the South Orange Performing Arts Center, hop over here. Want ticket info? Go here for all the details.