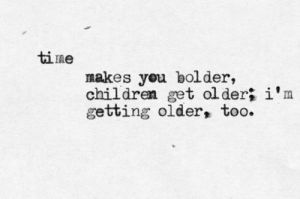 In the mental photo album I keep tucked deep within the cracks and crevices of my ever-failing memory, lay the snapshots of certain key moments of my life. They’re the ones I pull out to study in the middle of the night or while driving alone in my car. The ones that I can’t forget.

Unlike the stacks of albums and shoeboxes I have brimming with over 20 years of memories – little ones holding up Easter baskets filled with colorful plastic eggs or smiling in front of Cinderella’s castle – my mental snapshots are a mix of more authentic occurrences. They are the moments that weren’t staged to document our happiness. They’re the real deal.

There’s me, sitting in Newark Airport early in the morning after my 1990 wedding — long after the official wedding photographer had gone home — with a big smile on my face each time I remembered I was finally married to the guy I had chased and loved for so long. There I am again, weeping with relief a dozen years later when an ultrasound revealed the sex of my fourth child—a boy – which I knew would help soften the blow of that pregnancy for my husband. And another instant, this time me standing next to my soon-to-be-ex in a drab county courtroom reciting the names and birth dates of our four children before a judge and thinking how it ended much as it had begun: the two of us standing side-by-side and saying a bunch of words.

There are more happy moments: Lying next to my husband and listening to raindrops softly falling on our tent in the middle of the woods and thinking there was no place on Earth I’d rather be at that moment than lying atop that air mattress. Sitting beside my oldest son on a chairlift making its slow ascent to the top of the mountain and hearing nothing but the silence of the icy trees and snowflakes swirling around us and the sound of his teenaged voice really talking to me without the distractions of Twitter and YouTube. Or rocking in a glider at 2 a.m. with an infant curled like a kitten on my chest, his tiny head tucked under my chin while his tiny back rose and fell beneath my hand as he slept.

There’s a song that comes towards the end of Stephen Sondheim’s “Into the Woods” (which is now a new movie that I saw the other day) that cleverly observes how life is the slow, steady grind of work and husbands and wives and family and children and doing what you’re supposed to be doing. But every so often there is a flash, an instant that stands out from all the other instants and a moment we file away to be remembered later.

Oh. If life were made of moments,

Even now and then a bad one!

But if life were only moments,

Then you’d never know you had one.

– Sung by the Baker’s Wife in “Moments in the Woods”

My therapist is hot for this idea, too. She likes to tell me — after I’ve sat on her loveseat and complained about yucky things in my life — that the bad stuff lets us see how good the good can be. And as much as I wouldn’t mind a life filled with rainbows and unicorns 24/7, I kind of get her point.

A few years ago I was driving home from a dinner out with my four children to celebrate my oldest girl’s high school graduation when she plugged her iPhone into the car stereo and the song “Landslide” began to play. It was the Glee version of the Fleetwood Mac song, and as Gwyneth Paltrow began to sing all four of my children started to sign with her. Like, even my oldest son who is neither a joiner nor a singer. I began to sing as well and as we sailed through the dark towards home, we sang about time making you bolder and children getting older.

“And I’m getting older, too,” we sang, and I couldn’t help feeling that for a second, everything — our whole lives — had been working towards that moment in the car and singing that song. Like we were in a movie or something. “Landslide” is a song about making changes and you could feel the energy in our car and how – despite the divorce and our struggles trying to stabilize in its aftermath – we were all connected. It was pretty epic.

And since then, we’ve kind of considered “Landslide” our unofficial family song. I even wasted tons of space on my iPhone recently recording Stevie Nicks twirling onstage and singing it when I saw Fleetwood Mac in concert in October.

So on Christmas, after all their own loot had been unwrapped, the kids took turns giving me their presents. I got legit moonshine — procured from one of my oldest son’s southern fraternity brothers — replete with what I initially feared might be testicles floating within that I was later assured were in fact peaches; and a t-shirt from my oldest daughter that read, “Trust me, I’m a writer” (which is funny because nobody about whom I write trusts my writing in the least). And my little guy gave me hat and gloves I had bought for myself at the JCrew outlet that I gave to him to give me, which I kind of thought was better than anything he was going to find for me when he shopped at the Five Below on Christmas Eve. Like, I do not need a “Fault in Our Stars” poster.

But the gift that made me cry – and apparently the children go into Christmas morning with the goal of making their mom weep – was from my youngest daughter who used the lyrics from “Landslide” to create a paper tree from which she had dangled five hearts bearing all of our names. 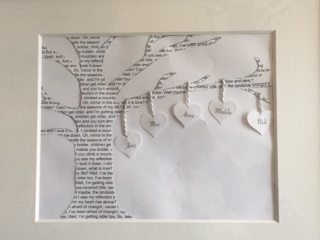 She explained the framed picture was something she had come across on Pinterest and I don’t know if she’s actually finished writing her college essays or even sent in all of her applications for next year yet, but man, if she put this much time into those endeavors she’d be going to Harvard. I’m just saying.

So now there’s a new moment in that mental shoebox crammed with 48 years-worth of memories stashed away in my crickety brain. Somewhere lodged beneath the snapshots of the babies and the terrible fights and the ride when all five of our voices sang out in our car on a warm spring night is me, unwrapping a gift that reminded me that not even a landslide could bring us down.