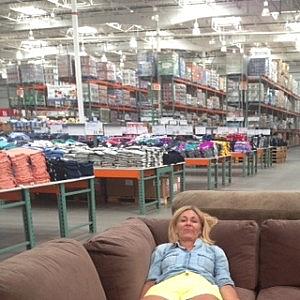 Sometimes I go to Costco, I’ll have you know.

My two daughters came into my room this morning to find me lying on my bed, typing on my laptop.

“Mom, are you wearing real clothes?” one of them asked, and she started to inspect the strange pleated pants I was wearing that I bought at Athleta recently and had really taken a cotton to. They’re kind of  silky – a step up from nylon – and an oyster color and are fitted at the ankle and fuller around the waist.

“Mom, we really think you need to get out of the house,” the other one said. “It’s like your old job all over again except now you’re just doing nothing.”

Then they started to toss a million different activities out to motivate me off the bed (Who do they think they are? Me?):

“Why don’t you go clean your closet?”

“Or maybe organize the crawl space?”

“Do you want to come to Harmon with me?”

But when I tried to interview them about their collective fear that I am frittering my days away this summer, they immediately stopped talking.

“I don’t want any of my quotes showing up misconstrued, as usual, on your blog,” said the older one, “which you’ve already done, like, a magillion times.”

NOTE TO SELF: Start wearing a wireless device to capture these conversation gems on the down-low because there is little else to write about of late.

With about six weeks left to go, this summer break from school (I hesitate calling it a “vacation” because, let’s face it, kids lying around your house all day is not akin to a week in Jamaica) has been a study in contrasts around here.

While the season started off with a bang – filled with head staples, stitches and matters of the heart – it has kind of evened out into one big yawn.

I mean, the most exciting thing that’s happened in my life this week is that I swapped out egg whites for Greek yogurt in my morning smoothie.

I mean, the downside is that I’ve had absolutely nothing to write about, which is a combination of being in a very slow personal news cycle and not wanting to hurt people’s feelings (oh, how all the feelings get in the way of things).

I’ve had my fair share of sustained summertime excitement over the years. In fact, this is the first summer in memory where I haven’t wanted to blow my brains out by mid-July.

In the past, I had little kids to keep busy, and I did so by lugging everyone to the beach each morning. That evolved from me dragging toddlers and infants down to the sand with pack-n-plays and blow up pools to swim team and tennis lessons and playing with their summer friends while I sat and chatted with my in-laws or read.

Certainly not terrible, but kind of mindless and repetitive.

Then the older kids found a social life – along with Four Loko and weed – and were out looking to get it popping 7-nights-a-week. On the heels of all that fun, I went through a divorce and landed a full-time job that kept me busy 24/7. It was relentless, but kind of great, too.

But now that I’m unemployed and the older three kids are busy this summer with internships and part-time jobs, I feel a little adrift just working on my writing each day. And a little guilty.

But then, I came across this quote last night in a book I’m reading called “Spiritual Divorce,” that kind of borrows from AA’s line of thinking about acceptance:

“Without the faith that life is just as it should be, we cannot accept people, places, and things as they are. We will always be trying to change, manipulate, and control the outer world. ”

So I’m trying to embrace where I am, which is really a gift. It’s an opportunity to spend more time with my youngest child – who I’ve spent the last four summers trying to get rid of for work – and concentrate on my writing.  It’s just how this summer is supposed to play out and who knows what will happen next.

In the meantime, the other big news in my life is that – aside from having something I wrote slated to be featured on Scary Mommy in August and another possible local reading in September or October – I am officially obsessed with the new trailer for “Fifty Shades of Grey.”

I heard the sultry new version of “Crazy In Love” Beyonce recorded for the trailer coming down the hallway from one of the girls’ rooms earlier, and I shouted (from my bed), “Hey! Are you watching Fifty Shades?”

“Yes,” they said in unison.

“OMG I’ve already watched it twice this morning,” I squealed.

“I’m obsessed,” I shouted back, laughing.

C’mon. I mean, a girl needs a little excitement in her life. Doesn’t she?