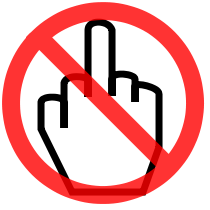 I remember the first time I heard my mother curse.

I was about 10, eating breakfast at the big, round table that took up much of our small kitchen and she was opening a box of Devil Dogs – presumably to put in our school lunches and not to serve for breakfast, but this was the 70s – when all of a sudden I heard her bark, “Shit!”

Of course, back then, you didn’t try to engage with an angry parent and ask what was wrong, so I just assumed she cut herself opening the box, and went back to my Cocoa Puffs. But inside I was thinking, “Wow. Mom just used a really bad curse word.”

Other than getting my hands on a George Carlin comedy album around 1976 and listening over and over to his infamous “Seven Words You Can Never Say on Television,” I don’t remember hearing anyone around me using controversial language on a daily basis. It was a G-rated world.

So when something PG-13 was uttered, I took note. Once, my dad told a story and its punch line, in which he told one of his employees at a Burger King in Yonkers to get his “Puerto Rican ass off the counter and get back to work,” was so hilarious, I decided to retell it while having dinner at my friend Katy Leary’s house. And while that punch line received uncontrollable laughter at my grandparents’ house one Saturday night when my father told the story over a table littered with Budweiser cans and ashtrays, it garnered icy silence and nervous stares from my friend’s family and a follow-up phone call to my parents from Mrs. Leary.

Probably around the same time – I guess you could call this my profanity awakening – I heard some older boys, maybe 7th or 8th graders, at my tiny Catholic school using the F-word and couldn’t believe my ears.

“How could they say that about a woman’s body?” I thought, because at that point, I was under the impression that all forbidden words had something to do with the female reproductive system.

I remember standing on the quiet street in front of my suburban New Jersey house with other kids in my neighborhood, trying to work out just where the “shit” and “fuck” were located.

Almost 40 years later, I’d bet that my 11-year-old son has a better understanding of what a lot of those naughty words mean. Today, we are surrounded by expletives. They jump out at us at every corner. They’re all over the radio and on TV. In fact, last night on The New Girl one of the characters compared a folded napkin to a vagina, which isn’t one of those dirty words (although used in this case improperly) but the visual just seemed to cross a line. I was like, “Wow.”

And Jimmy Kimmel hosted his first annual Celebrity Curse Off the other night between Julia Roberts and Sally Field and you should’ve heard the mouth on Gidget. After Sally unloaded a big fat “motherfucker,” poor Julia looked at the audience and said, “Why am I in a curse-off with the Flying Nun?”

Not that I am any language prude. In fact, I have a tendency to sprinkle much of my day-to-day conversation with salty talk. It worked back in college, when my freshman roommate – a cute little blonde debutante from Baltimore – cursed like a sailor. We got along great, swearing and filling up a two-foot ashtray with Marlboro cigarette butts.

Over the years, I’ve developed enough sense to know when I needed to clean up my act, like at work and around my little children. Back in the day, “stupid” and “dummy” were on the list of words you weren’t allowed to say around our house and I think I might have washed a little mouth or two out for employing such offensive language.

But now that they’re bigger, well most of them, I seem to have lightened up my restrictions on cursing around the kids. I have confessed to yelling, “Fuck you” into a phone at my 21-year-old and was cursing to high heaven during a drive to Virginia two weeks ago. Just ask my daughter, who was sitting next to me in the car when I learned, via a text sent by my girlfriend, that I had not only missed my fifth grader’s Drug Abuse Resistance Education (DARE) graduation but that his essay had been selected as the best in his class and he got to read it out loud at the assembly.

“Are you fucking kidding me?” I shouted, thinking of all the DARE graduations I’d attended not only for my other children but covering as a local reporter. “Do you mean to fucking tell me after all these fucking years, one of my kids finally fucking wins and I’m not fucking there?”

My daughter pretty much kept quiet during the expletive-riddled outburst but later that night at dinner, she reported my bad behavior to the rest of our family. “You should have heard Mom,” she told them over a giant tower of onion rings. “She had, like, a total temper tantrum driving down here.”

“What a diva,” they all concurred, as I sat picking at a salad while they plowed their way through the spire of fried rings.

But sometimes, nothing gets the point across quite like a well-placed expletive. I do tend to employ curse words probably more than the average person in my everyday conversations — which I consider a part of my charm — and that carries over into the blog. And let’s face it; the blog is just like one giant conversation in which I get to do all of the talking.

When I first started posting, I used foul language pretty liberally but now I try to save the really big ones for where they’re going to have an impact on the story. I’m trying to keep it classy over here in the blogosphere. But I can’t tell you how many people have commented to me about how I described my ex-husband’s shoveling skills. Not to brag, but it’s goddamn poetry.

But after a weekend of driving almost 18 hours and contending with the terrible drivers south of the Mason-Dixon line, I pulled as many expletives that I could think of out of the bad-word arsenal when I wrote about the experience for the blog.

And that post prompted a very nice e-mail from one of my Internet boyfriends – which is what I like to call my guy friends who follow my blog mostly because, even though they’re all married and there’s nothing romantic or unseemly involved whatsoever, I think it sounds really funny – suggesting that all the cursing detracted from my writing.

At first I thought, “Fuck him.”

But then I saw on the Today Show that Prince – and if you really know me, you know I loved that weirdo so much I had a poster of him hanging in my freshman dorm – had sworn off cursing. The Purple One recently told Essence magazine that he quit all the cussing out of respect to others. “Would you curse in front of your kids? To your mother?” he asked.

This from the man who sang “Let’s Pretend We’re Married” and “Sexy M.F.”?

[Here is where I spent countless minutes trying to find a YouTube video of either of these songs, which apparently do not exist in this country. Trust me, they’re racy.]

And so, out of deference to my own mom and the few of my children who read the blog, along with a handful of local officials, colleagues and other folks I’ve known on a professional level who’ve found my blog and read along, I think I might have to follow suit.

Don’t get me wrong: Some drivers will always have to be called out for their douchy ways and some guys will always shovel like, well, you know how they do it.

But I’m going to make an effort to keep things a little cleaner. I mean, they are just words, upon which we’ve decided arbitrarily to attach negative connotations, making them a threat to society. But there is something appealing about trying to preserve a sense of civility. I mean, it’s either that or we chuck it all out the window and start wearing jeans to church and chewing with our mouths open. Licking of fingers would not be far behind followed by sweatpants at the office.

I will be one small blogger trying to maintain some level of dignity in an increasingly undignified world.

And really, if I can give up pizza and bagels, cursing should be no fu… um, no problem. No problem at all.