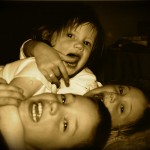 Everybody’s good at something. For instance, my neighbor Susan makes delicious cupcakes, my friend Kathy is a really fast runner and my ex-husband shovels snow like, well, nobody’s business.

I am really good at getting pregnant. Seriously, it just comes naturally to me. My ex just had to give me a sexy look and nine months later we’d be drowning in dirty diapers and tears (often our own).

So, this natural talent of mine really jibed with the overwhelming urge I had as a young married woman to have a lot of babies. In retrospect, it’s clear that I was trying to work through some earlier conflicts, which was mixed with a desire to create the family I always wanted. But at the time, I just thought I had a bad case of baby lust.

Had I been left to my own devices and perhaps had a better marriage, who knows how many kids I would have ended up with. But after a while, my ex finally took matters into his own hands and with a quick snip, shut me down at four.

Had he had his way, we would have stopped at two children. We had a boy and a girl, my ex reasoned, and they were both healthy — arriving with the requisite number of fingers and toes. Why tempt fate?

Probably most other couples would have already had the “How many children do you want?” conversation well before they were saddled with two kids already in diapers. But he and I were never really ones for planning, or important conversations, so it came as a shock to me to hear he wanted to shut my baby factory down when it was just getting going.

It’s hard to say what drove my insatiable thirst for more and more children. Maybe I liked growing up with a lot of siblings and wanted that for my own children. Maybe there was an innate desire to feel special as the mother of a large brood. Or maybe I just found something I was really good at.

My oldest two kids were only 17 months apart, so I bided my time before I began my campaign for #3. But when my ex appeared to be holding his ground, I steamrolled right over him and got knocked up anyway.

But the universe has a way of reminding you just who is in control, and I ended up miscarrying that pregnancy. I wallowed in that loss until my ex finally succumbed and gave me baby number three — like a sympathy pregnancy. I did, however, have to guarantee that the child would grow up to receive the Heisman Trophy, which is going to be tricky since she’s terrible at football.

Now, you would think at this point, with three kids in four years and not more than 30 years old,  I’d have been crying uncle. My life was a never-ending loop of Barney, baths and chicken nuggets.

But I have never been very good at finding my “off” button when I’m doing something that I liked, and craved just one more child to feel complete.  I actually told my ex that a fourth child would complete me, like I was goddamn Jerry Maguire.

When reason failed, I had no option but to once again put my baby making plan into covert operation. But, seriously, how my ex really believed that I was all of a sudden really into getting it on all the time, makes me wonder whether dudes employ thought or reason in that department. And that’s where the guy didn’t even stand a chance.

And that, my friends, is when I decided to shut the factory down myself. The loss was too overwhelming, I just couldn’t live through it again. So I gave away all the strollers and bouncy seats and baby clothes and all that baby shit in my crawl space and focused instead on the three babies I already had.

And, of course, you probably guessed what came next. I got pregnant and this one stuck. My youngest child was born almost six years after I had baby #3.

And you know what? I’ve never felt the baby itch again. My guess it that teenagers will do that to a person.