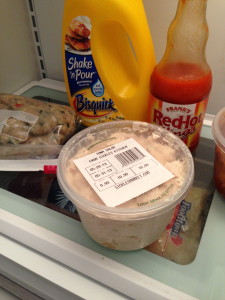 I found it in the refrigerator yesterday as I was digging out the half and half for my early-morning coffee.

There it was, sitting quietly next to the pancake mix and Frank’s buffalo sauce, like a time bomb waiting to explode.

I had sent my son to the market the day before to pick up something we needed for dinner and told him he should also buy sandwich fixings for lunch this week. He’s starting his summer job working for a landscaper and I knew he could barely afford the gas to drive to work each day, much less buying lunch.

“Get some of their good ham,” I suggested. “Or maybe a container of pulled pork.”

And while he did take my advice and get the pork, he also bought something that is banned from my house. Like, even my ex-husband, who was not great with boundaries, knew it was off limits.

It’s fucking tunafish. There’s a big, oozing tub of it on the lower shelf of my fridge and I can’t stop thinking about it.

It freaks me out.

I worked in a deli in college and had made it clear that I did not get involved with the freaky vat of tuna for subs (or egg salad, for that matter). If you were working with me, you just knew that when an order for tuna-anything came in, you would be slathering the stuff on a roll and not me.

I found myself working with a friend one weekend afternoon our senior year, and although we were sorority sisters and had lived together the year before, she was having none of my tuna-bullshit.

An order came in for a tuna sub and she turned to me and asked me to make it. I balked.

“Make the fucking sub,” she instructed, and I knew I was being difficult and irrational, but I was actually afraid of the stuff.

In the end, it turns out I was even more afraid of her, and found myself scooping the smelly brown glop from a tub and smearing it on a sub roll.

On a recent flight to San Francisco with the kids, a family seated a few rows behind us – reluctant, it seemed, to pony-up the cash for inflight dining snackboxes – cracked open their lunches from home and the smell of tuna immediately filled the cabin.

It was all I could do not to turn around and give them the hairy eyeball for subjecting 20 rows of passengers to their lunch stench. Selfish.

And now it’s living in my house.

I’ve seen my son make a sandwich. I’ve witnessed the aftermath of debris all over the counter and sandwich matter caught in the teeth of a serrated knife lying in the sink. I don’t know if I could handle bits of tuna lying on my granite counter or perhaps dripping down the side of the container and threatening to infect the innocent pint of strawberries sitting nearby in the frig.

My first instinct when I saw the tub yesterday was to quickly wrap it up in a Target bag and throw it out in the trash in the garage.

“Don’t do that,” advised my daughter, who was almost as freaked out as I was by the discovery, but definitely more pragmatic. “It would be such a waste.”

And I know the tuna-buyer would certainly tell me I’m being a baby (which I’m sure he will after he reads this) and that’s possibly true, but he’s got his own list of of phobias (used Band Aids and hair in the drain, come to mind).

So maybe he should understand how bugged I am.

In the time it took for me to write this, I’ve heard him banging around downstairs making lunch and getting ready for another day working in the hot sun. I hope his sandwich is especially delicious when he eats it in a few hours.

And if he ever were to ask me how much I loved him, I wouldn’t say, “I love you from here to the moon and back.”

I’ll tell him, “I love you so much, I let you keep tunafish in my refrigerator.”

Because that is truly love.

Want to share on Twitter or Facebook? You can e-mail posts, too. Click on those little icon-y doodads down below. You can also receive emails alerting you to new posts by subscribing to A My Name Is Amy to the right of this post. Don’t say I don’t try to make your life easier.

10 thoughts on “stinky way to start the day”