My kids hate my job.

Check that: my kids are dubious that being the editor of an online news source even qualifies as a real job when it’s happening from a desk in my bedroom.

To them, it makes no difference whether I’m writing about an arrest or if I’m posting “LOL!” on Facebook. As far as they’re concerned, my focus is on my laptop and not on them.

And it’s been a struggle this first year of working at home, trying to set boundaries and not letting my work bleed into time I should be spending with my family.

So one of my New Year’s resolutions, next to getting more organized about my finances and cutting down on my weekly wine intake, is to be more present with the kids when we are together – not listening distractedly as I check my e-mail or being glued to what’s happening on Twitter. To really be focused on what they’re saying.

I even saw a quote attributed to Buddha posted on Facebook 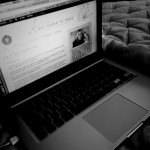 (naturally) that I was inspired to share with the rest of the family on a chalkboard in the kitchen. I got out my fancy chalkboard markers and while a few of them watched in anticipation, I wrote: “I am awake.”

And the collective response from my people was: “lame.”

But in the week or so since I’ve written that, we’ve had a number of opportunities to talk about what it means to be “awake” to life.

For instance, the 9-year old insists on losing his new NorthFace jacket twice a week. By last week, he had misplaced the fleece during the big cold snap we had along with his new basketball sneakers, which coincided with the start of the season. After making him scour all the basements in the neighborhood and under all the furniture in our house, his sister found the sneakers in a metal bin in his room that is supposed to hold Nerf guns and other weaponry, not footwear.

Then this morning, the same finder of lost sneakers was running late, trying to slurp the last spoonfuls of soup for breakfast, and ran out of the house to high school wearing fuzzy socks and slippers. She called crying, mortified by her fashion blunder and even madder at herself for having been so discombobulated. This comes on the heels of rushing out of the car last night to play practice and dropping the iPhone – all of two-weeks old – that was on her lap onto the pavement and shattering the screen.

And I am just as guilty of not being present. It makes the kids crazy when I can’t remember something they just told me and I have been known to drive off and forget to take a child or two with me.

We all have complicated lives – with kids and work and dinners and dogs that randomly poop on your rug – and sometimes it’s hard to keep it all in check.

But I am determined to slow it all down, to appreciate this stage of my journey into the wilds of parenting.

So I’ve made a standing date with my high school girls each day after school. I close up my laptop and head down to the kitchen to greet them when they walk in and try to lure them into talking about their day.

I positioned myself down in the kitchen after school last week and they burst through the front door, looked at me and started up the stairs.

“We hate tea,” said the younger.

“But we could just talk,” I reasoned.

They slunk into the kitchen and sat down at the table begrudgingly answering my innocuous questions.  I turned my back to grab a spoon and they fled as if from an interrogation, and I thought, “These are the same people who feel like I don’t pay them enough attention?”

When I actually look at them they act as if I’m Medusa and they’re about to be turned to stone.

So let them hate my job and complain I’m always online. Even when I didn’t work I had my nose buried in e-mail and Amazon.

They can complain I don’t pay attention to them, but maybe someday they’ll see what the job gave them, like college educations, and that I found something that allowed me to provide that and still be a presence in our home and have tea in the afternoon.

The kids were sitting around the kitchen table recently and the three older ones were poking fun at my job and what it was exactly that I did and the youngest chimed in, “ She’s like a stay-at-home-computer mom.”

This essay was originally posted on Patch.com on January 11, 2012